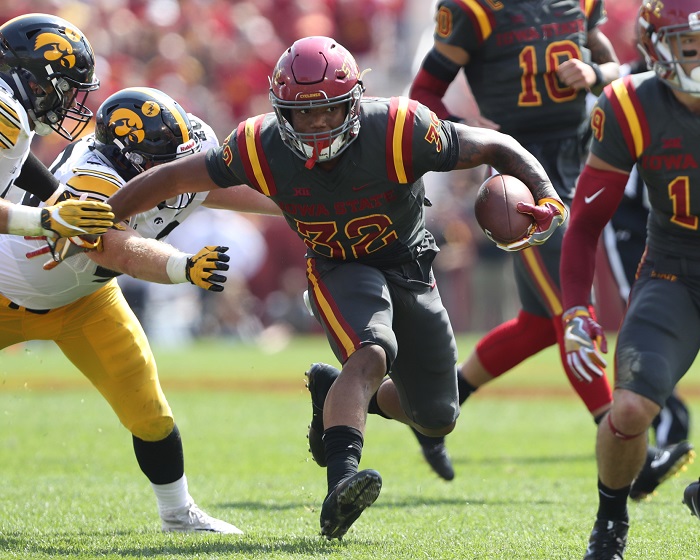 Cyclone Nation got some disappointing, but expected news on Monday when star running back David Montgomery announced on Twitter he was declaring for the 2019 NFL Draft. Montgomery, wrote, “Cyclone Nation means the world to me. As I move on to the next chapter in my life to pursue my dream of playing in the NFL, I can only hope that I’ll be welcomed back to Iowa State with the same open arms that have always been there to embrace me. I will always bleed Cardinal and Gold and I will always be a Cyclone. “

To God Be The Glory !!!! I will forever love the Cyclonenation !! pic.twitter.com/0mmSyVYFiN

Montgomery followed head coach Matt Campbell from Ohio to Ames, and the two helped turn around the Cyclones football program. Montgomery was an underrated three-star recruit who played in 12 games as a true freshman in 2016 and ran for a team-high 563 yards and two touchdowns. Last season, he racked up 1,147 yards and 12 touchdowns, with 36 catches for just under 300 yards. He topped those numbers this season with 1,216 yards and 13 touchdowns. During Montgomery’s time on campus, which coincides with Campbell’s time, the program went 19-19 and 1-1 in bowl games. The programs 16 wins the past two seasons are the most in Iowa State history in back-to-back seasons since the early 2000’s.

Montgomery was a First-Team All-Big 12 selection the past two seasons.