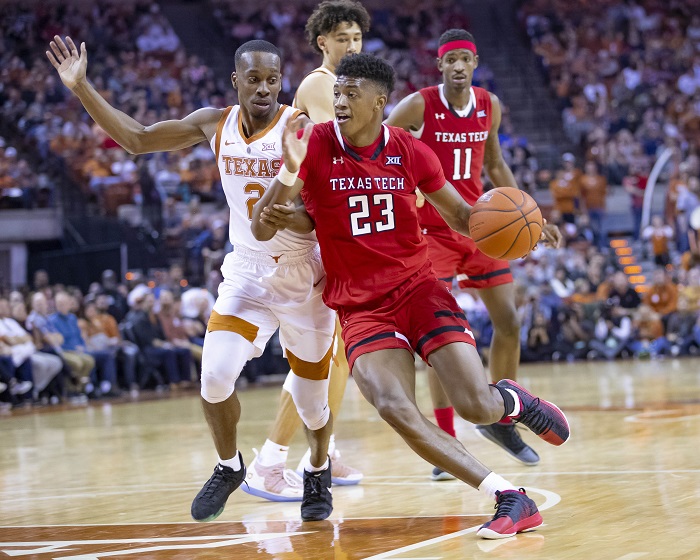 It’s Big 12 Basketball, so up can become down real fast. We saw two 0-2 teams win two straight. We saw two 2-0 teams lose two straight. But one team rose above them all and remains at the top of the league. Here is this week’s Good, Bad and Ugly.

Wreck ‘Em at the Top

Right now I’m circling Feb. 2 on my calendar. Well, first, it’s my Dad’s 80th birthday so no basketball. Second, that’s the first meeting between Texas Tech and Kansas, this one being in Lawrence, Kan. It’s possible the Red Raiders are undefeated in Big 12 action going into that game. Now, it’s a long road to get there. But Tech is playing the highest quality basketball of any team in the league through two weeks and is the league’s only undefeated team (4-0). It’s not just Jarrett Culver, though he had a huge run at the end of the Oklahoma win early in the week. Tariq Owens has grown into one of the best shot-blockers in the league (he’s had games of 3, 4, and 4 blocked shots in the last two weeks). Guard Davide Moretti is one of the league’s top shooters from the arc and has four straight games in double figures. Matt Mooney is making the leap from mid-major program to major-conference program look pretty easy. He was the Red Raiders’ scoring leader against Texas (22 points). They’ve provided Tech with a solid core of players as Deshawn Corprew, Brandone Francis and Kyler Edwards continue their growth. Between now and Feb. 2 the Red Raiders have Iowa State, Baylor, Kansas State and TCU. It won’t be easy. But the Red Raiders have a chance to be the higher-ranked team going into that matchup with Kansas, assuming they keep winning.

If you’re not acquainted with West Virginia’s new inside man, you need to. Now that Sagaba Konate is done for the season (and likely headed for the NBA after the season ends), Culver is getting his minutes and he’s making the most of it. Culver didn’t even play until after the fall semester ended. But in six games he’s hit double figures in scoring five times and put together three double-doubles, including two this past week. There is a lot to be excited about with the 6-foot-10 freshman from Youngstown, Ohio. Right now the Mountaineers are running him off the bench because he still has a lot to learn. But that raw talent is molding into something special faster than I think anyone in Morgantown expected.

Wanna understand why myself and others are high on #HailWV forward Derek Culver? Watch this sequence. Blocked shot. Runs floor. Posts up. Makes a great bounce pass to Haley for a layup. #OKSTvsWVU @Heartland_CS @WBESBrandonLowe #Big12MBB pic.twitter.com/EmdlC081qx

This is a year of transition for the Mountaineers, to be sure (see our Bad section for that). But Culver’s development could be one of the key reasons West Virginia bounces back next season. Of course, head coach Bob Huggins says he wants to win now. That’s unlikely for other reasons. But I’ll catch West Virginia in person on Tuesday against TCU (or at least I hope so) and I look forward to seeing Culver in person.

The Return of Wade

Three games ago I was near-certain the sky was falling in Manhattan. Kamau Stokes was hurt, as was Dean Wade. Stokes came back after missing one game. But Wade was the one everyone was uncertain about. Part of that was the fact that there was such a range on Wade’s potential return from an injured foot. Head coach Bruce Weber said it could be anywhere from three to seven weeks. After the win over West Virginia all Weber said about Wade was that he was “on track,” though he didn’t really say what that meant. Well, on Saturday, we found out.

And Wade did play. While he only scored 2 points in the Wildcats’ last-second win over Iowa State, he did have nine rebounds. At his best he may be the best all-around forward in the Big 12. Now he gets a few days to rest before the Wildcats hit the floor again, and barring a setback he’s only going to get better.

The Wildcats are back to normal. That’s good news for basketball fans in Manhattan. As you were, sky.

If you enjoy last-second wins Saturday was a great day for you because we had two in the span of about two hours. Oklahoma exacted a last-second win over TCU with a lay-up by Kristian Doolittle. But two hours before that the Kansas State Wildcats stole some of that Hilton Magic from the Iowa State Cyclones and used it for themselves in the final few seconds. Lindell Wigginton missed a free throw, Kansas State’s Dean Wade rebounded it and this is what happened next.

This conference is just so much fun.

It’s just going to be a tough season in Morgantown, W.Va. this year. Head coach Bob Huggins knows it and so do the fans at this point. But at least he’s going all-in with the youth movement. As we already explored, Derek Culver’s emergence is huge. But the Mountaineers are also committing minutes to Jermaine Haley, Emmitt Matthews Jr., Trey Doomes and Brandon Knapper. Huggins says he wants to win now, but those wins are likely going to be few and far between, at least in the short term. But there’s some promise with these young players and it’s time to give them the reins.

Coaches will tell you that once they redshirt a player, they really don’t want to burn that redshirt. But a couple of coaches just had to this week. Huggins burned Doomes’ redshirt on Saturday and played the freshman for 8 minutes against Oklahoma State. The bigger deal was Bill Self torching Ochai Agbaji’s redshirt before the TCU game after Udoka Azubuike’s injury and he has two solid games off the bench this week. He scored 7 points against TCU and scored 10 points against Baylor. He’s going to be an awfully interesting player to watch, considering the first offensive possession of his career went like this.

It falls under the “bad” category for me because I’ve seen what redshirt seasons can do for young players and coaches love to give those young players that development year. But sometimes you do what you have to in order to win.

I’m still confident that the Horned Frogs are going to be among the Top 5 teams in the league when the regular season is complete. But I also knew that this past week’s road trip was going to tell us a lot about them. They had to go to Kansas and to Oklahoma and try to steal one, and the Horned Frogs couldn’t do either. The Kansas loss looks bad on paper (by 9 points) but they were in it for most of the game. The loss to the Sooners was a game the Horned Frogs could have turned around. They’ve had a couple of transfer defections in the past couple of weeks. But the real issue right now is the loss to Jaylen Fisher. He’s been out of the lineup since Big 12 play began with a persistent knee injury. Before he left the lineup the Horned Frogs had Fisher, Alex Robinson and Desmond Bane on the floor at the same time and this TCU offense hummed. Without him it’s sputtered just a bit. Plus, Fisher brought some real gravitas on defense, too. RJ Nembhard has played well in his stead, but TCU needs Fisher back.

Injuries with the Stars

It was a bad week for injuries in the Big 12. It started late last week with the announcement that West Virginia big man Sagaba Konate wasn’t going to play the rest of this season. Coach Bob Huggins said it was a “family decision.” So ….. Then before Kansas’ game with TCU we learned its big man, Udoka Azubuike, would miss the rest of the season with a wrist injury. Finally, on Saturday, the Baylor Bears lost Tristan Clark for the rest of the season with a knee injury. Plus, Oklahoma State lost Michael Weathers during its game with West Virginia with an ankle injury. His status is unclear. Did I miss anyone? Hope not. That’s enough for one week.

Heading into Saturday’s games the home teams was 11-3 in Big 12 action. In conference play you always want to protect your house and steal a few on the road. Well Saturday in the Big 12 was like highway robbery. Four of the five road teams won that day, including Oklahoma State (at West Virginia), Kansas State (at Iowa State), Kansas (at Baylor) and Texas Tech (at Texas). So now the home team is 12-7 so far this season. Oklahoma was the only team to protect its home turf on Saturday, and as you know they needed a last-second basket from Kristian Doolittle to beat TCU.