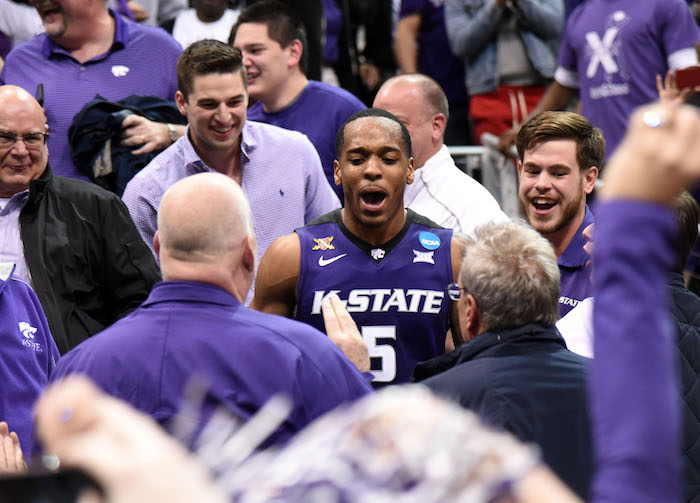 After watching each of the Big 12 games for Week 2 of the league season (Jan. 7-13), here is the Heartland College Sports Men’s Basketball Starting 5.

Get used to it. He’s going to be in this spot a lot this season. In the wake of Udoka Azubuike’s season-ending injury he stepped up in a huge way this past week. Against TCU he had a double-double, 31 points and 14 rebounds. Then, on Saturday against Baylor he had 17 points, 3 rebounds, 5 blocks and 5 steals. I think that line on Saturday is actually more impressive.

Oklahoma has been waiting for nearly three years for THIS Kristian Doolittle. Against Texas Tech he had 9 points, 8 rebounds and 5 steals. Then against TCU he had a double-double, 24 points and 10 rebounds. It looks like he’s not going to give back that starting job to Jamuni McNeace without a fight.

Tough to give this spot to a player whose team lost two games last week, but he had a solid week overall (I considered West Virginia’s James Bolden for his 31-point effort against Oklahoma State, but he didn’t score a single point in the game previous to that). Noi scored 30 points against Oklahoma, scoring eight 3-pointers. Noi also scored 10 points and had 3 steals against Kansas in the loss against the Jayhawks. Noi has the ability to get hot like that from outside. The Horned Frogs could use more of it.

I really wanted to give a spot to someone from Oklahoma State this week and I considered Cameron McGriff. But Kansas State did the same thing OSU did — bounce back from an 0-2 start to win two straight — and Barry Brown Jr. was the fuel for the Wildcats all week. Brown scored 29 against West Virginia, fueling the Wildcats’ 21-point comeback (largest comeback in program history) and 23 against Iowa State, including the game-winner. You can’t do much better than that.

Culver had another great stretch of play in the Red Raiders’ win over Oklahoma. He failed to score for the first 15 minutes of the second half and then grabbed nine points down the stretch to secure the win. Against Texas, on the road, he knew the defense was coming for him and he overcame it anyway, scoring 14 points, grabbing 9 rebounds and dishing out 6 assists. As with Lawson, it’s probably best you get used to Culver having a spot in our Starting Lineup most weeks.

I need to get him in here now because he may be in the starting lineup for the Mountaineers soon enough. The freshman forward has taken Sagaba Konate’s minutes and made them his own. He had double-doubles in both games this past week and his game is making quick progress after not playing the first half of the season. Konate’s absence should accelerate his development. Oh, and he injured his shoulder against OSU but just put the shoulder back in its socket. That’s all.