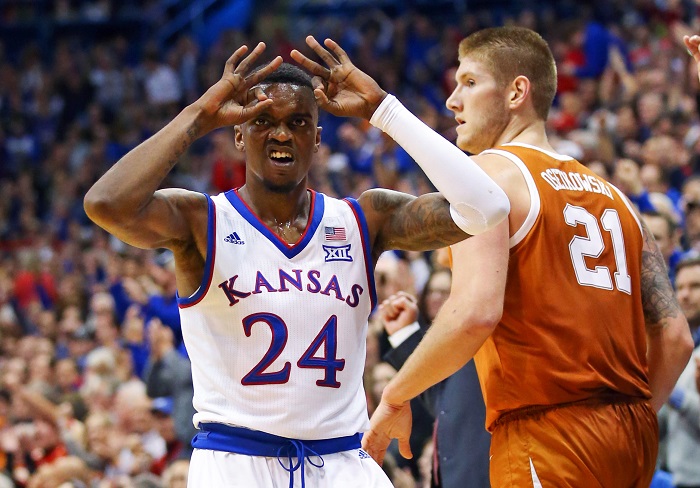 Monday night meant a pair of Big 12 games, inconveniently played at the same time. Plus, I came home early from work with a head cold. So I set up shop in bed trying to work my way out of this cold because I have a pass for the West Virginia-TCU game on Tuesday. But my dog, well, he wasn’t all that concerned about my view of Texas at Kansas.

When you’re sick and you need to watch #TEXvsKAN but your dog keeps getting in the way of the laptop #RockChalk #HookEm #Big12MBB pic.twitter.com/nOYY6Idv1l

But my friend, Chuck Cox, was at the Texas-Kansas game on Monday night, and it was his first trip to Allen Fieldhouse in Lawrence, Kan. His view was unobstructed.

My buddy @Axeemjacks taking in his first game at Allen Fieldhouse tonight and it couldn’t be a better opponent for him: #HookEm #RockChalk #Big12MBB pic.twitter.com/1Qfo8DycBt

I have got to get there one day, hopefully when I don’t have a head cold.

As for Texas (10-7, 2-3 in Big 12) at Kansas (15-2, 4-1) the Jayhawks bolted out to an 8-0 lead before Texas got back into the game and for the most part it was a nip-and-tuck tilt in the first half. Texas actually had the lead by two points, 40-38, at halftime. But Kansas turned it on when they came back out after halftime, building some cushion to the point where the Jayhawks had an 8- or 10-point lead for a good portion of the second half. That was, until Texas rallied.

Down 69-59 with 5:10 left, the Longhorns tied the game at 73-all with 2:24 left. The Longhorns three-balled their way back into it, with a trey by Matt Coleman III and three straight from Jase Febres, the last of which clinched the tie. From there Kansas pushed it back to five points, but never could quite put Texas away. Texas guard Courtney Ramey made a 3-pointer with 13 seconds left, cutting the lead to one point, 79-78. Then Kansas guard Marcus Garrett made 1-of-2 at the free throw line to push the lead to 80-78 with 8 seconds left. Texas had more than enough time to go the length of a floor and get a shot.
Texas didn’t need a three, but that’s what they ended up with. And given Febres’ outburst leading up to the final seconds, it wasn’t a shock to see the ball in his hands from the arc to end the game. It was just a bit of a shock to see him miss it after that hot streak. The Longhorns went for the win on the road and came away with nothing.

All of Febres’ points off the bench came from the arc, naturally. He had 12 points. Matt Coleman III led with 16 points. Kerwin Roach II had 13 points. Dylan Osetkowski had 11 points. Ramey had 10. The Longhorns had five players in double figures and lost. They were perfect from the free throw line (but only 7-of-7) and shot decent from the floor (42.6 percent). Plus, Texas committed just six turnovers and outrebounded Kansas by 7. You don’t get nights like that very often in Allen Fieldhouse.

But Kansas offset that by being much better from the floor — 53.7 from the floor and 50 percent from the arc. The latter is a big number for Kansas. They’ve been well below 40 percent from distance all season. Plus, the Jayhawks only committed four turnovers, so that helped offset the rebounding deficit.
Lagerald Vick had 21 points, including five 3-pointers. Marcus Garrett had 20. Dedric Lawson had 17 points and 8 rebounds. Devon Dotson added 10 points, 5 assists and 5 rebounds. That’s a line Kansas head coach Bill Self loves.

At one point both the Texas-Kansas and Baylor-Oklahoma State games were at halftime and three of the 20 starters hadn’t missed a shot from the floor.

Can’t recall the last time I kept up with two #Big12MBB games at the same time and two players were perfect from floor through first half: #RockChalk Marcus Garrett (7-7, 17 pts) and #OKState Lindy Waters III (4-4, 11 pts). For that matter, #OKState Yor Anei is 3-3.

In some ways the Baylor-Oklahoma State game was a bit better than the Texas-Kansas game. Like the game in Lawrence, it came down to the wire. Both the Bears (10-6, 2-2) and Cowboys (8-9, 2-3) played with great urgency and focus. Baylor had a 40-35 lead at the break. The Cowboys quickly overtook them in the second half before the Bears roared back and made it a tight affair in the final minutes.

The final minute or so is worth dissecting. Baylor’s Makai Mason fouled Oklahoma State’s Michael Weathers with 39 seconds left and the Cowboys down three points. It’s the kind of play you don’t want your guard to make with the game that close. But it happens. Except when you look at the play a little closer …

How is this a foul on #Baylor lol #sicem pic.twitter.com/JjypILsXbc

Yeah, um, that’s an offensive foul. The really bad part of this is that the only person with a better view of this foul than the home viewer was the referee, who you can see in the foreground calling the foul on Mason. I just don’t get what that ref was looking at. That’s a clear offensive push-off. I mean you can’t extend your elbow like that.

Forget the 2 FTs he hit in the final seconds. This is the Makai Mason shot that put #SicEm up 5 and practically sealed the deal for #Baylor and its win over #OKState #BUvsOKST @Heartland_CS pic.twitter.com/Bv6faxXsJi

That, for all intents and purposes, ended the game. I know Cam McGriff came down and hit a 3-pointer right after that. But Mason then hit two free throws to make it a four-point game, and you don’t get there without Mason’s deuce on the possession before. So Baylor walked out of Gallagher-Iba with a heckuva win over an Oklahoma State team that hasn’t played a bad game so far in Big 12 play as far as I’m concerned.

King McClure is going to remember this game for a while because he had a career-high 29 points, including seven 3-pointers. In fact, he helped Baylor shoot a ridiculous 60 percent from the 3-point line (15-of-25). Jared Butler, the freshman guard, added 16 while Makai Mason had 13. Mark Vital was vital on the glass with 13 rebounds.

Oklahoma State wasn’t shabby from the 3-point line (44.8 percent), but it paled in comparison to Baylor. The Cowboys shot 38.6 percent overall. But there are good nuggets in there. McGriff had 15 points and 10 rebounds. Yor Anel hit double figures for the first time in Big 12 play (and third time this season) with 11 points. Lindy Waters III had 11 points. But Curtis Jones had 18 off the bench as he was coming off a 15-point game against West Virginia on Saturday.

Only one game in the Big 12 tonight as West Virginia travels to Fort Worth to face TCU. I plan on being there for the 6 p.m. tip. So check my Twitter feed (@PostinsPostcard) for updates, along with the HeartlandCollegeSports.com Twitter feed (@Heartland_CS).