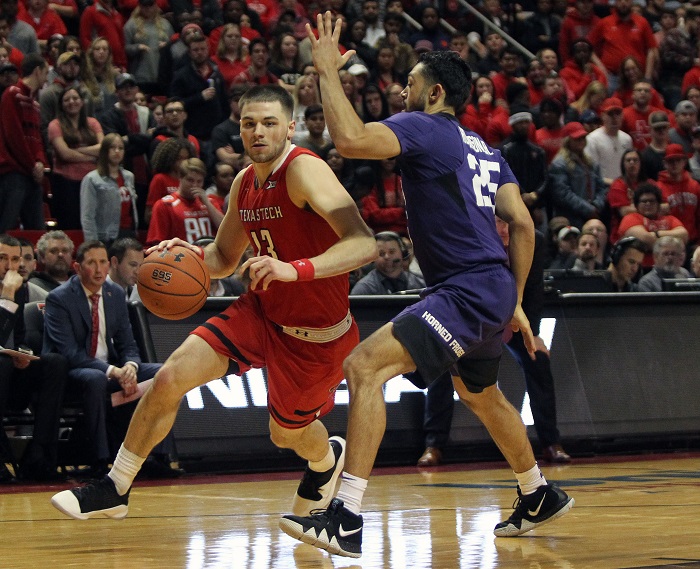 So, Big Monday is supposed to be BIG MONDAY. In other words, the best games featuring the best teams. You know, close games with high stakes?

Yeah, the combined margin of victory in these two games was 49 points.

It was about as painful as the hurting that Baylor’s Flo Thamba put on this basketball in the first half.

Flo Thamba would like you to get that stuff out of here. The #SicEm forward is starting to come into his own off the bench. #Baylor #BAYvsOU #Big12MBB @Heartland_CS pic.twitter.com/VFNIufza1b

I covered Baylor’s game with Alabama on Saturday and wrote a piece on why the Bears look like a team that’s for real in this Big 12 race, despite losing forward Tristan Clark a few weeks ago. At that time this looked like it would be a team that head coach Scott Drew would have to fashion together with duct tape. But this five-guard starting lineup looks built to last now. With Monday’s win the Bears have now won five straight games and six of their last seven games. This win might have been the most dominant of any Big 12 game so far this year.

How dominant? Baylor went on a 9-0 run at one point in the first half to take a 16-8 lead. At one point Baylor made seven straight field goals to go up 28-15. At halftime the Bears’ leading scorer was Freddie Gillespie, a backup forward who played two years ago at Division III Carleton (MN). In fact, late in the first half that Baylor bench had outscored OU’s entire lineup, 17-16 (eventually OU had 21 first-half points. But it’s still a bad look). Midway through the second half the Bears were shooting 50 percent from the field and from the 3-point line.

It was just a flat-out butt whipping. There’s no other way to put it. Makai Mason had 12 points, Mario Kegler had 11 points, Jared Butler had 10 points, and King McClure, Mark Vital and Gillespie each had 8 points. I mean, you do that every night and you’re probably not going to lose.

OU is in trouble. The Sooners started the season 11-1 and are now 4-5 since then. After putting a hurt on Vanderbilt on Saturday this was unexpected, to say the least. The Sooners had finally won back-to-back games (Oklahoma State and Vandy) for the first time in a month before the Baylor game. Now it’s back to square one and four days to think about all of this before traveling to Morgantown to face West Virginia. The Sooners need that game. Their next two come against ranked opponents — Iowa State and Texas Tech. Then, after that, they get the rematch with Baylor in Waco. OU shot about as poorly as you could imagine on Monday. Lon Kruger has to hope they bounce back on the road.

Kristian Doolittle led OU with 12 points while Miles Reynolds added 11 off the bench. To add insult to injury, the Sooners were the Big 12’s top rebounding team going into the game, averaging 40 per game. The Sooners were outrebounded by Baylor, 35-29.

So, I started with the Baylor-OU game and midway through the second half I slid over to the TCU-Texas Tech game. That wasn’t going much better. At least TCU was within 10 points when I checked in.
That didn’t last long.

Yeah, so Tech put an end to its three-game Big 12 losing streak with a win over the Horned Frogs. And the Red Raiders looked great doing it. This was the type of game they need every night. Yes, Jarrett Culver got his — 18 points and 7 rebounds. But three other Red Raiders were in double figures — Matt Mooney with 18 points, Tariq Owens with 17 points and Davide Moretti with 11. That sort of balance offensively serves Tech well. The team shot 54.2 percent from the floor, 42 percent from the 3-point line and nearly 80 percent from the free-throw line. This was exactly what the Red Raiders needed with four days off before they leave for Lawrence, Kansas, to face the Kansas Jayhawks in a nationally-televised game on CBS. That game is a chance for Tech to make its case to assume the Big 12 lead (or at least a share of it, assuming form holds the rest of the week).

On paper TCU didn’t play that bad. The Horned Frogs shot 45.7 percent from the floor, 70.8 percent from the line and freshman Kevin Samuel had a double-double (10 points, 12 rebounds). Forward Kouat Noi led with 17 points. Guard Desmond Bane added 13 points. But when you’re 16 points down at halftime, paper doesn’t matter much. As mentioned earlier, TCU trimmed it down to 10 points midway through the second half. But the Red Raiders just kept right on trucking.

The loss ended TCU’s two-game winning streak and things get no easier on Saturday when the Horned Frogs go to Baylor to face the scorching-hot Bears.

On Tuesday Kansas travels to Texas for a 6 p.m. game against the Longhorns.