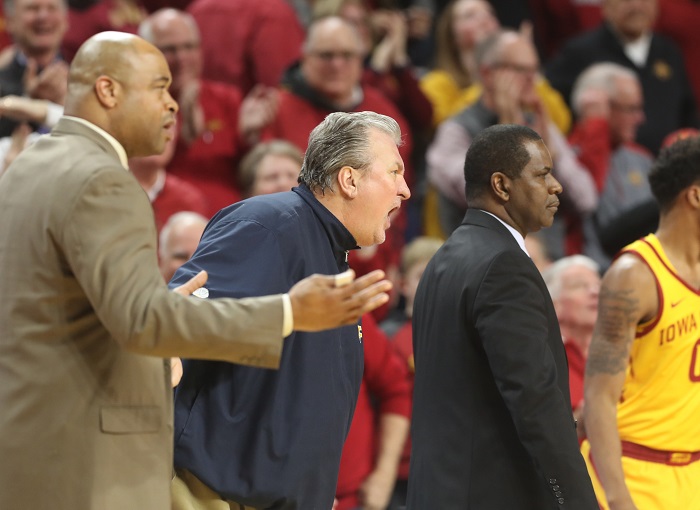 It’s an interesting thought, as we wrap up the first half of Big 12 men’s basketball action. Of course, the Jayhawks lost, 73-63, to Texas (12-9, 4-4), in Austin, Texas. We’ll get to why that loss is important in the context of the road ahead in a minute. But as I recovered from an evening of frivolity with co-workers (yes, a Happy Hour on Tuesday night), I arrived home to highlights and footage of Self talking with the media after the game. And yes we’ll get to West Virginia and Iowa State in a bit because the Cyclones (16-5, 5-3) took care of the Mountaineers (9-12, 1-7) on Wednesday and in doing so helped further tighten the Big 12 race.

Kansas coach Bill Self: “When you lose, it should really piss you off. When it doesn’t do that, you’re kind of comfortable with accepting what happened.”

And here’s the video to go with it that provides a bit more context.

“When you lose it should really piss you off (…) I don’t think we’ve had the same mindset to fight that maybe some of the teams in the past have had to fight.” – Bill Self on the loss to Texas.#kubball pic.twitter.com/Z5JHZXFL71

The back end of the second quote is what stuck out to me. “I don’t think we’ve had the same mindset to fight that maybe some of the teams in the past have had to fight.” That comment may sound like a soft call-out, but the words behind it really matter. The coaches I’ve always covered talk a lot of about fight. You may not be the best team on the field or on the court, but coaches are clear about one thing — never stop fighting. The mere fact that Self isn’t sure if his team has the mindset to do that this deep into the season is concerning.

So is that true road record for Kansas — 1-5. In the Big 12 you expect to lose road games. It will happen. In fact, the Jayhawks were the only Big 12 team with a winning record on the road last season. But now they have league road losses at Iowa State, Baylor and Texas. Kansas is holding serve at home (4-0), so if they can keep that up their chances of winning the regular-season crown improve. But if their issues on the road persist, there are enough contenders left on the Jayhawks’ schedule (Kansas State and Texas Tech specifically) to make their road really difficult.

You look at the box score and it’s easy to see why Kansas lost. Dedric Lawson didn’t have a double-double (13 points, 7 rebounds), guard Lagerald Vick had a sub-par game (10 points) and the supporting cast that had been so good the past couple of weeks — with the exception of Ochai Agbaji, who had 24 points — didn’t show up. Devon Dotson had 9 points, Marcus Garrett had 2 points and Quentin Grimes had 3 points. Texas also outrebounded Kansas by four and shot 21-of-23 from the free throw line.

Texas was highly motivated. There was a players’ only meeting before the game, led by head coach Shaka Smart (yeah I know that goes contrary to the “players only” meeting, but oh well). Longhorns forward Dylan Osetkowski said the game was a “crossroads” game for the team. Well, consider the road crossed. Osetkowski was one of four players in double figures (16 points). Kerwin Roach II (15 points), Jaxson Hayes (13 points) and Jase Febres (12 points) also cleared that bar. The UT defense held Lawson without a point in the first half. And while Kansas was in striking distance for a good portion of the night, the Jayhawks held just one lead in the game — 2-0 after the game’s opening basket.

Texas absolutely needed a win like this. More than any other Big 12 team at the moment the Longhorns are on the NCAA Tournament bubble. ESPN’s Bracketologist, Joe Lunardi, has the Longhorns in the tournament as of this week. But CBSSports.com’s Jerry Palm, who runs that site’s Bracketology projections, left the Longhorns out of his field. A win like this over a Top 15 team at home will surely help their case. And remember — the Horns only lost to Kansas by a basket in Lawrence a couple of weeks ago.

Meanwhile, Wednesday night the Iowa State Cyclones defeated the West Virginia Mountaineers, 93-68. The weather outside was truly frightful. I heard the high temperature in Ames, Iowa, was minus-9 degrees. And people are literally turning water into snow. Because, well, why not?

Of course, Cyclone Nation showed up. While they may not be used to minus-9, they’re used to getting to Hilton Coliseum when the conditions are less than favorable. The Cyclones didn’t need any Hilton Magic, though. Against an undermanned West Virginia team all Iowa State had to do was be the nationally-ranked team it is. After the first 12 minutes the Cyclones slowly, but surely, pulled away. They were up by double-digits at halftime, thanks in part to a 28-10 run to end the first half.

Plus, Lindell Wigginton, ISU’s talented sophomore guard, showed up huge. He had a season-high 27 points in this one. You have to tip your hat to Wigginton. One of the league’s best players entering the season, he missed most of non-conference with an injury, an while he was gone ISU’s talented freshmen — specifically Tyrese Halliburton and Talen-Horton Tucker — assumed his spot. Wigginton has handled it like a sport, accepting a bench role and, at times, thriving. Wednesday night he thrived and then some. Yeah, he scored 27. But he was also 12-of-14 from the free throw line, so he wasn’t just shooting. He was driving and drawing fouls along the way. A Wigginton that does both effectively is one of the most dangerous weapons in this league, and it’s nice to see those two assets working together.

Marial Shayok had 19 points and Nick Weiler-Babb had 14 points. Head coach Steve Prohm emptied his bench all but two players scored. When you’re considered one of the best teams in your league and you’re playing the undermanned last-place team in your league, this is exactly how you should win.
As for West Virginia. Well, guard James Bolden didn’t make the trip, so the Mountaineers were without their most consistent player for the past three weeks. He didn’t make the trip after a high-ankle sprain. That isn’t an easy injury to come back from, so Bolden may miss more than just Wednesday’s game.

The Mountaineers had some fight in them despite being undermanned. Perhaps Self should place a call to West Virginia head coach Bob Huggins, who was plenty of fight left in him at the end of the game, which resulted in two technical fouls and an early ticket to the locker room.

Meanwhile, Texas Tech, Iowa State and Kansas are all tied for second place, one game behind. And Texas is just a game behind, by itself, in sixth place.

The weekend game to watch is, of course, Texas Tech at Kansas at 3 p.m. CST on CBS. It’s the first battle of two of the league’s top teams. Oklahoma kicks off Saturday at West Virginia (11 a.m. CST, ESPN2), while Texas is at Iowa State at 1 p.m. CST (ESPN2). At 5 p.m. CST Kansas State is at Oklahoma State on
ESPNU while Baylor hosts TCU at 7 p.m. CST on ESPNU.

Plus, I’ll be back on Facebook Live at 8 p.m. to talk more Big 12 basketball as we head into the weekend. Go to our Facebook page to check it out.