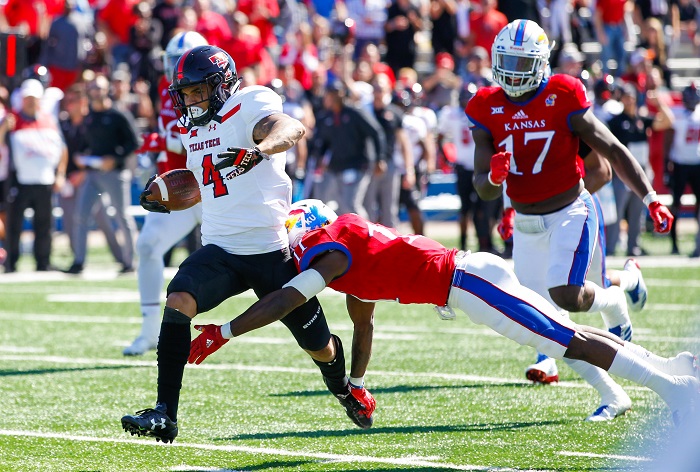 One week is in the books and some former Big 12 players stole the show. Garrett Gilbert is apart of the most famous play thus far in AAF history: The Orlando Special. He helped lead the Orlando Apollos to the biggest blowout of the week over the Atlanta Legends, who are not represented by any Big 12 players. Perhaps the Legends may think of picking some up this week.

Another Apollos player, Terence Garvin, is likely the defensive player of the week after recording the league’s only pick-six this weekend. He had two interceptions and led the Apollos in tackles.

The San Antonio Commanders, who are filled with Big 12 talent, won 15-6 over the San Diego Fleet. Plenty of Big 12 players were major contributors, especially on defense. For a recap of how each Big 12 alum did, continue reading below.

Trevor Knight, QB, Oklahoma:  Although listed as the starter quarterback, Knight did not play, and from the looks of it, he won’t surpass John Wolford anytime soon.

Justin Stockton, RB, Texas Tech: Stockton averaged 6.6 yards per carry during the Hotshots 38-22 victory. He carried the ball seven times for 46 yards. His longest run of the day went for 16 yards.

Steven Johnson, LB, Kansas: Johnson led the Hotshots with seven tackles. He also notched a six-yard interception and a pass deflection. It was a fine day for one of the league’s most successful players.

Cordon Moog, RB, Baylor: Moog was not active for the Express’ 26-0 defeat to the hands of the Birmingham Iron.

Garrett Gilbert, QB, Texas: We missed him on the preview because his college is listed as SMU. That’s every bit correct considering he transferred. Gilbert had a spectacular night and is a part of the AAF’s biggest moment thus far: The Orlando Special.

The Orlando Special is a trick play that saw wide receiver Jalin Marshall find Gilbert for a five-yard touchdown. Aside from his miraculous reception, Gilbert dominated an overmatched Atlanta Legends team. He connected 15 of 25 passes for 277 yards and two touchdowns. His longest pass went for 33 yards. Gilbert also picked up 10 yards on the ground from two carries.

Marquis Lucas, OL, West Virginia: Lucas was not active for the Orlando Apollos 40-6 victory over the Atlanta Legends.

Terence Garvin, DB, West Virginia: If anyone had a bigger night than Garrett Gilbert, it was Terence Garvin. He produced the first-ever pick-six in the AAF history with a 51-yard interception return. It was his second interception of the night. He also led the team with 11 tackles, three solo and one for a loss. As if that wasn’t enough, let’s mention his two pass deflection for good measure.

Jordan Sterns, DB, Oklahoma State: Sterns made one tackle on special teams. He did not start at defensive back. After what John Woflord did to the Stallions with four touchdown passes, maybe some changes will be made. The secondary couldn’t look much worse.

Jordan Thomas, DB, Oklahoma: Thomas was not active for the Commanders 15-6 victory over San Diego.

Zack Sanchez, DB, Oklahoma: Sanchez sealed the victory with an interception in the end zone for a touchback. His final tallies included a pass deflection and three tackles, one solo.

Nick Rose, K, Texas: Rose kicked three field goals from distances of 29, 28, and 23 yards. His nine points were a crucial difference in the game.

Ben Johnson, TE, Kansas: Johnson did not record any statistics, but was on the active roster.

Defensive Player of the Game @T_Garvin28 with the Pick 6️⃣

The interception that started our last drive. 😍

THE interception of the game. @ZSanchez15