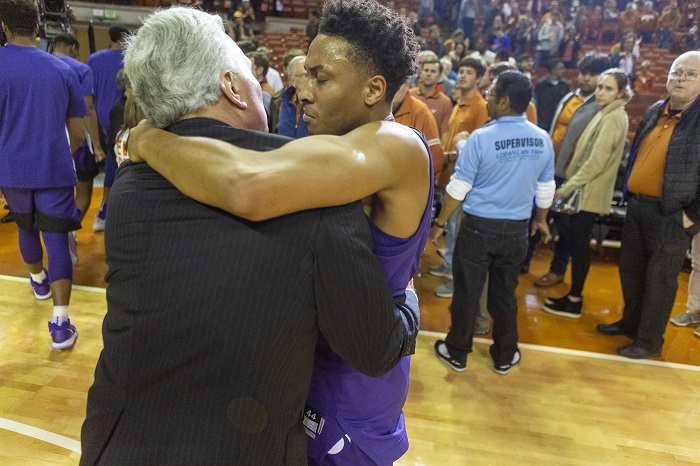 One of the narratives that has followed Kansas State this season is that their offense may not be the most efficient offense in college basketball. It’s not. But what the Wildcats do well they do practically all the time, and that’s part of the reason the Wildcats (19-5, 9-2 in Big 12) beat Texas (14-11, 6-6), 71-64.

There are no surprises in this Wildcats team. That isn’t a knock. The Wildcats are the most experienced and stable team in the Big 12, and perhaps all of college basketball. It doesn’t take much film study to know that Dean Wade is a great inside-out forward, that Barry Brown Jr. is the team’s best mid-range shooter and that Kamau Stokes is the distributor that can shoot from distance. They are perhaps the most experienced players in K-State history.

Guard Cartier Diarra was out with a right ring finger injury. So all K-State did was put all five players in double figures — Brown and Xavier Sneed with 16 each, Wade with 12 and Stokes and Makol Mawien with 11 each. Mike McGuirl was the only other Wildcat with points with 6. Mawien had a big game, even though it doesn’t look that big. The Wildcats needed someone to give them something in place of Diarra. It turned out to be their big man, and the Wildcats went on to improve to 9-1 this season when four or more players are in double figures.

K-State shot 54.9 percent from the floor 47.1 percent from the 3-point line. In the second half, at one point, the Wildcats were 75 percent from the floor. They made adjustments at halftime in two areas. Defensively, they worked to slow down Texas guards Kerwin Roach and Courtney Ramey, who had 24 first-half points. They combined to score 3 points in the second half. The second adjustment was Kansas State’s more deliberate approach to their offense. Now, Kansas State isn’t exactly trying to turn over possessions quickly to begin with. But to counteract Texas’ up-tempo first half the Wildcats squeezed all they could out of the shot clock. It limited Texas’ opportunities to score.

All of this makes it sound like Kansas State dominated Texas. Nothing could be further from the truth. In many ways the Erwin Center down in Austin, Texas, is a house of horrors for ranked teams of late (and Kansas State finally got back into the Top 25 on Monday). Texas entered the game 6-1 in their last seven home games against Top 20 teams. The Longhorns had won their previous two games. They seemed to have found some equilibrium on offense, an area they’ve struggled with at times all season. The emergence of Ramey has certainly helped. He’s hit double-figures in four of his last seven games. Against West Virginia on Saturday he was 5-of-6 from the 3-point line. Ramey ended up with 10 points and he was critical in helping Texas build a 4-point halftime lead.

Roach had 17 points and 8 rebounds. In fact, he led Texas on the glass. Like Kansas State the Longhorns shot great in the first half.

Stats at the half of #KSTvsTEX. Look at the shooting. Marvelous. Wade leads #EMAW with 8. Roach leads #HookEm with 14. Everyone came to play tonight. Great stuff. #Big12MBB @Heartland_CS pic.twitter.com/2wXrxX7KfE

But Texas’ dropoff in shooting overall — the Longhorns ended up shooting 44.7 percent from the floor — did them in. Shooting 21.1 percent from the 3-point line didn’t help, either. But given the margin of the loss that seemed to matter less than the fact that Texas definitely saw a reduction in possessions thanks to Kansas State’s offensive approach.

Texas is a .500 team in Big 12 play. They may end up being a .500 team in Big 12 play when the season ends. But the Longhorns have been in every one of their six losses. The margin of defeat is 4.33 points per loss. Their “worst” loss by margin was actually Tuesday’s loss to K-State (7). These Longhorns are basically nine baskets away from being the league’s top team. You can decide if that’s disappointing or not. I see them as a team, if Shaka Smart can keep them together and not lose any NBA defections after the season, that could take a serious step next season. Plus, these Longhorns are going to be a complete pest down the stretch, and they have a series of games that could impact the Big 12 race and seeding — at Baylor, home against Iowa State and at Texas Tech in an eight-day stretch.

Kansas was hoping for some help Tuesday night. So was Baylor. So was Iowa State. So was Texas Tech. Those are the teams giving chase in the Big 12 regular-season race. Kansas State gutted this one out. Now 5-1 on the road in the Big 12, the Wildcats are doing the things a team has to do in order to end Kansas’ streak of 14 straight Big 12 regular-season titles. Another big one awaits on Saturday at home against Iowa State. That one could be an elimination game for the Cyclones, two games back in the standings. Then K-State gets a breath with a week against West Virginia and Oklahoma State, the league’s two worst teams.

Think ahead. Let’s say Kansas State wins the next three. That’s no given of course. But if the Wildcats can then their Feb. 25 game in Lawrence against Kansas could become the Jayhawks’ last stand to keep their streak alive. That would be amazing theatre.

But, for now, Kansas State remains in control.

There is just one game in the Big 12 Wednesday night. Texas Tech at Oklahoma State. This one tips at 8 p.m.