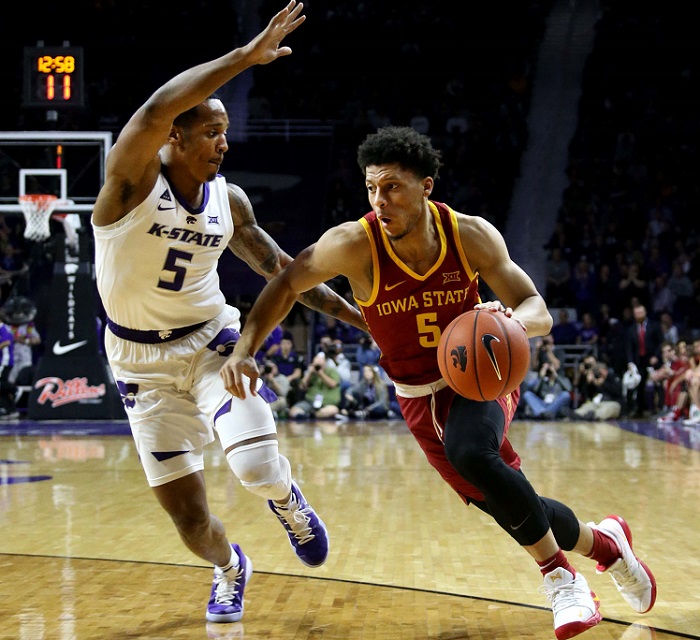 The Big 12 race is really heating up and there are some big games ahead. We explore that and more in this week’s Big 12 Basketball Good, Bad and Ugly.

THE BIG 12 RACE HEATS UP

The race for the Big 12 regular-season title (or the race to see if Kansas’ unbelievable streak of 14 straight regular-season titles comes to an end) hit the final stretch on Saturday as Iowa State, two games back of Kansas State at the top of the standings, defeated the Wildcats, 78-64. It was desperation time for the Cyclones, if they wanted to claim the Big 12 crown (or at least a share of it). In doing so they did the Jayhawks, and the Texas Tech Red Raiders a favor by closing the race down to one game. Lindell Wigginton had 23 points off the bench for ISU. Freshman Talen Horton-Tucker had 20 points and Marial Shayok had a double-double — 13 points and 13 rebounds. Plus, the Cyclones went into the Octagon of Doom to do it.

I’ve talked with our HeartlandCollegeSports.com boss Pete Mundo on his radio show for the last two weeks that even though Kansas State had a two-game lead in the league the race was by no means over. And the ISU-K-State match up on Saturday was just the beginning. There are several big games the next few weeks that could influence this race:

Tuesday, Feb. 19: Baylor at Iowa State. The Cyclones could eliminate the Bears completely from contention. A loss would put the Bears three games back of the top. The Cyclones can’t afford to lose at this point, either.

Saturday, Feb. 23: Kansas at Texas Tech. The Jayhawks and Red Raiders get a full week off before this prime-time battle royale in Lubbock. Winner stays in the race. Loser, most likely, is out.

Monday, Feb. 25: Kansas State at Kansas. If the Jayhawks win in Lubbock and the Wildcats stay on track, this could be the battle for the Big 12 title.

Saturday, March 9: Texas Tech at Iowa State. Stay with me. Tech beats Kansas. Kansas beats K-State. Tech and ISU keep winning (certainly NOT A GIVEN in this conference). This matchup in Ames, Iowa, could be HUGE.

And none of this includes all the speed bumps along the way. This race is just starting to get good.

TECH SEEMS TO BE BACK

An overreliance on Jarrett Culver to start Big 12 play may have led the Texas Tech’s three-game losing streak in January. But since falling to Iowa State, Baylor and Kansas State in succession, the Red Raiders are 6-1, with their only loss being to Kansas in Lawrence. Now, granted the Red Raiders have been feeding on the likes of the have-nots in this league, but it’s how they’re doing it that matters to me right now. These are the teams Tech shouldn’t struggle with, and they’re not. Their average margin of victory in those five Big 12 wins since the Big 12-SEC Challenge is 23.2 points. They even dispatched of Big 12 contender Baylor by 25 points on Saturday in Lubbock. When you can take care of the teams you’re supposed to beat like this, that tells me things are going right on offense and on defense. Now, as mentioned above, Tech gets a week off before its huge matchup with Kansas in Lubbock. That will be their make-or-break game. Win it and you’re in it. Lose it and you’re probably out.

Oklahoma’s win over TCU was overdue. The Sooners had lost five straight going into that game and their NCAA hopes were teetering. All season they’ve been considered a NCAA Tournament team, but at 16-10 going into this week their margin for error is closing. Consider ESPN.com’s Bracketology for Feb. 14 (yep, a Valentine’s Day edition). The Sooners were one of Joe Lunardi’s Last Four In and were slotted for one of the First Four games (against Indiana, both 13 seeds). This win over TCU probably won’t end the Sooners’ time on the bubble, but their win over TCU — another team most consider to be a NCAA Tournament team — bolsters their case entering the stretch run of the season. And that stretch run is brutal — vs. Texas, at Iowa State, vs. West Virginia, vs. Kansas and at Kansas State. Right now that could be, at best, a 2-3 stretch for OU. That would be 18 wins going into the Big 12 Tournament, and I feel they would need at least one more to burnish their tournament credentials. The win on Saturday helps, but I think this OU team is going to need at least one Big 12 Tournament win to help its case.

I covered the Kansas-TCU game on Monday and the Jayhawks started four freshmen. That’s not what Bill Self wants to do, but it’s what he has to do. Here’s my story on the game.

With Kansas’ hopes of winning the #Big12 hanging on by a thread, the #Jayhawks pulled out a tough OT win over #TCU https://t.co/HexX8CNg1q

The big revelation to me is how much progress guard Devon Dotson’s game has achieved this season. Dotson was the one freshman I think most expected to play right off the bat, because of the opening at point guard. And, for most of the season, he’s played well, but hasn’t asserted himself offensively as much as Graham did last season. Well that changed against TCU, as he scored 25 points, grabbed 10 rebounds and dished out 5 assists. He had another fine game against West Virginia on Saturday — 15 points, 5 rebounds and 8 assists. Now, he wasn’t the only freshman who had a fine week. Ochai Agbaji continued his fine play as well. But with defenses so focused on slowing down Dedric Lawson, the Jayhawks need more contributions from Dotson and the other freshmen to keep them in the Big 12 race and beyond.

Oklahoma State is limping toward the finish to this season. I’m actually already starting to work on season wraps for all 10 Big 12 teams. You can bet we’re going to talk a bit about this recruiting class that head coach Mike Boynton Jr. is putting together.

Yeah #OKState is being hit hard this season. But reinforcements are on the way. Mike Boynton has been recruiting. #TTUvsOKST @Heartland_CS pic.twitter.com/R313AoSScg

By the way I love Cam McGriff as a player and he and the other juniors, Lindy Waters III and Thomas Dziagwa, deserve better than this season. Hopefully these reinforcements can help right away in 2019-2020.

So here’s what absolutely no one wanted to see on Saturday in Manhattan, Kan.

Dean Wade left the game for K State with an injury. It appears he came up gimpy on this play. pic.twitter.com/o5mb0tw04U

After the game K-State head coach Bruce Weber described the injury as a “non-structural” injury to his right foot. He’s questionable for Monday’s game with West Virginia. Weber also said the injury is not similar to what kept Wade out of the lineup earlier this season.

With West Virginia and Oklahoma State next up for the Wildcats, there’s a good chance the Wildcats could let Wade sit the entire week leading up to the Kansas game on Feb. 25.

Heartbreaking News for Tech Basketball: Norense Odiase had two cousins pass in a car accident in Lubbock early Friday morning. He will play and there will be an announcement before today’s game @KAMCNews

I’m proud of @kingno_  Please pray for him and his family. pic.twitter.com/oljJ22InOn

We at HeartlandCollegeSports.com send our thoughts and prayers to Odiase’s family.

Let’s go back to Bracketology for a minute. Joe Lunardi at ESPN.com had Texas and TCU as No. 8 and No. 9 seeds, respectively, going into the weekend. Well Texas won, beating Oklahoma State, and TCU lost its second straight, this time to Oklahoma.

Texas has been a strange team all season. Just when you think they’ve turned a corner they stumble. But the next two games offer the Longhorns a chance to burnish their credentials a bit more as they face Oklahoma and Baylor on the road. Those don’t sound like huge potential wins, but for a Texas team that is 15-11 right now, every little bit helps. Especially when you look down the road and you see back-to-back games with Iowa State and Texas Tech. I feel Texas needs those wins over OU and BU big-time to solidify themselves in the eyes of the committee.

TCU, meanwhile, could clear 20 wins before it’s all said and done. But their schedule down the stretch is even worse. The Horned Frogs still have to play Iowa State, Texas Tech and Kansas State in the final few weeks. So those games against Oklahoma State and West Virginia are critical. Those are games the Horned Frogs have to win in order to avoid a bad loss. They’re also necessary if you’re hoping to avoid the first day of the Big 12 Tournament. Right now it’s the Horned Frogs that would be the No. 7 seed if the season ended today. Texas would be No. 6.

That makes the March 9 game in Austin, Texas, a big one. That day Texas hosts TCU. The No. 6 seed in the Big 12 Tournament could be on the line. So could one team’s chances of making the NCAA Tournament. Welcome to life on the bubble.

West Virginia’s starting five against Kansas was Lamont West, Derek Culver, Emmitt Matthews Jr., Jermaine Haley and Brandon Knapper. Culver was the only player that stood out. West Virginia lost by 25 points. This is what usually happens when you start four freshmen (Culver, Matthews, Haley and Knapper). It’s just bad times all the way around in Morgantown.

The Bears have now lost two of their last three games but, thanks to Kansas State’s loss to Iowa State, they remain two games back in the Big 12 race. But that may not matter at this point.

Injury Update: both Makai Mason (toe) and King McClure (knee) are being held out of today’s game at Texas Tech. They are being evaluated and treated daily.

Bears have 8 scholarship players available, including one former walk-on.#SicEm | #1TGF

It should be noted that Mason played in Monday’s win over Oklahoma. McClure did not. With Baylor’s top two guards out of the lineup, the remaining players are doing their best. But I think you’re seeing the results of not having Mason and McClure on the floor against the league’s upper echelon. Baylor’s two recent losses are to Kansas State and Texas Tech. Games with Iowa State, Kansas State and Kansas remain. The Bears look like they’re about slip out of this race completely.