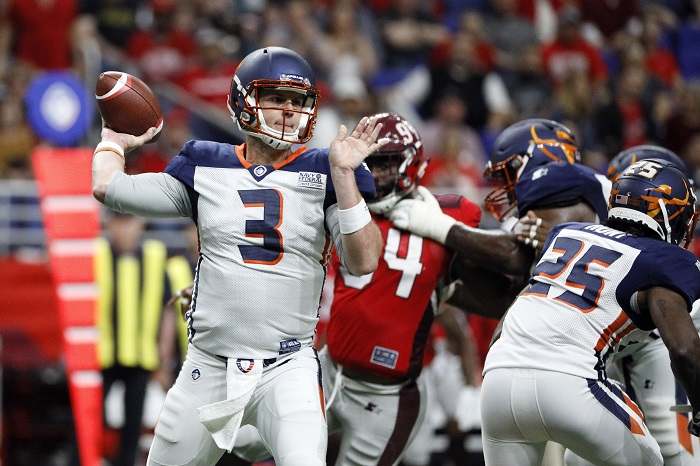 Let’s take a look at how all the Big 12 Conference alumni did during Week Two of the Alliance of American Football action.

Justin Stockton, RB, Texas Tech: Stockton was instrumental in a comeback victory over the Express. One of his four carries went for a 45-yard touchdown run to place the Hotshots within one score. This carried the momentum for Arizona to overcome an 18-6 deficit in the fourth quarter.

Steven Johnson, LB, Kansas: For the second week in a row, Johnson had the most tackles on the Hotshots. He finished with nine total, six solo. Four of these tackles ended up in a loss of yardage. Johnson is currently third in the AAF for tackles.

Garrett Gilbert, QB, Texas: It was an absolute battle in the Alamodome, but Gilbert channeled his inner-Tom Brady and led a miraculous fourth quarter comeback on the road against the San Antonio Commanders. Orlando trailed 29-17 entering the fourth quarter. With 7:49 remaining, Gilbert found a receiver for a touchdown and the Apollos never looked back. Garrett Gilbert is starting to look like the one guy who could make a jump to the NFL at the quarterback position. He leads the league in passing yards by nearly 150 yards. If you take out Austin Appleby (1 for 1) and Brandon Silvers (3 for 4), Gilbert leads the league in completion percentage at 64.2. The only man in front of him for touchdowns is Arizona’s John Wolford. However, Wolford does not have a receiving touchdown like Gilbert does. Oh, and by the way, Gilbert scored Offensive Player of the Week for week two.

Marquis Lucas, OL, West Virginia: Lucas was not active for the Apollos 37-29 victory at San Antonio.

Terence Garvin, DB, West Virginia: Garvin played well, but it certainly wasn’t any where near the accolades his week one dominance garnered. He was in on nine tackles, one solo. One pass was deflected by Garvin.

Aaron Green, RB, TCU:  Green racked up 19 yards on six carries. His longest run went for a seven-yard gain. He was more effective as a receiver, catching three of five targets for 35 yards.

Cyril Richardson, OL, Baylor: Richardson started at left guard. Commanders quarterback Logan Woodside was sacked just once for a three-yard loss. This is an improvement from week one’s three sacks.

Mo Porter, OL, Baylor: Porter did not start, but was active. He started week one at left tackle when the Commanders picked up a victory.

Nick Orr, DB, TCU: Orr finished with five total tackles, including four on defense and one on special teams.

Duke Thomas, DB, Texas: Thomas was inactive against the Apollos.

Ben Johnson, FB, Kansas: Johnson made his first start for the Fleet at fullback. He was originally listed as a tight end. The Fleet won 24-12 over the Atlanta Legends, an 0-2 team without a Big 12 player on its roster.