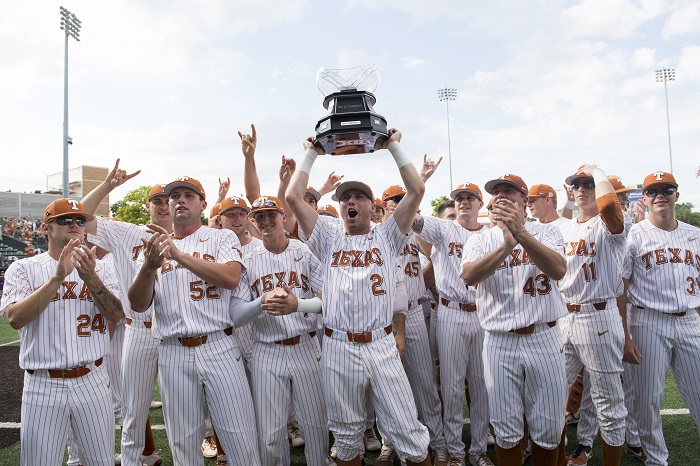 Texas had a tough break when it was announced that David Hamilton, a solid player who hit .291 and five home runs as sophomore, was ruled out for 2019. Hamilton was originally planned for the No. 7 spot on our list, but he had surgery to repair a torn Achilles tendon. This was a major blow to the Longhorns.

However, Texas did regain a player who missed 2018 because of Tommy John Surgery. Donny Diaz is on the Roger Clemens track. Unless you are a Texas fan, you probably haven’t heard of Diaz. He’s from Kingsville, Texas near Corpus Christi. That area receives little attention for its sports. Diaz went to San Jacinto College, the same place Clemens and Andy Pettitte pitched before they became stars. In 2015, Diaz secured nine saves and finished 3-0 in 18 apperances for the Gators. He allowed five earned runs in 24.1 innings, providing him with a 1.85 ERA. Diaz struck out (36) as many hitters as he allowed on base (18 hits and 18 walks). Diaz has solid potential, but like many of the best closers, the key to his career is staying healthy.

Diaz has missed two seasons to injuries already. He’s back this season. He has yet to give up an earned run in four innings during his three appearances this season. If Diaz can remain healthy and live up to his potential, then he will be a high draft pick. Diaz could be one of the best closers in baseball. Learn his name now, because a healthy Diaz is bound for Major League Baseball.