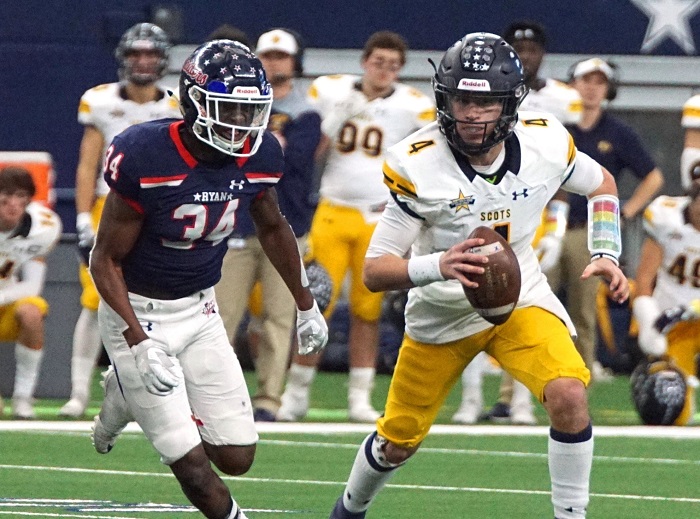 On Sunday, HCS’ Derek Duke Matthew Postins made their way to the Ford Center at the Star (Frisco, TX) where they saw hundreds of prospects display their talents on the field. Luckily, they didn’t have to fight any weather indoors and, in the end, they saw some great plays made along with some excellent quotes from prospects with serious interest in Big 12 schools. They watched over 8 hours of drills, one on ones, you name it, but the important thing at the end of the day is, where do schools stand with these talented young men? Here is the best of the best from Sunday afternoon in Dallas. Enjoy!

“It’s Cold (Iowa), I know that. I know it’s one of the best college towns (Ames) and I kind of want to go to a school where there is less distractions so that way, I can be more motivated when I do go to school. I have always known them (ISU) for basketball and over the past couple years they are known for football. Everything is going up for them and I like coach Campbell. I plan on taking a visit to Iowa State this Summer.”

“I am interested, and I like Oklahoma State. I have talked to coach Vic a few times and I plan on going to their junior day so we will see how that goes.” On Coach Gundy: “He’s different and I kind of like the way he’s different.”

“I haven’t really gone down to Baylor. Last time I went down is when they played Texas. I did like the atmosphere and I did like the uniforms, you can’t miss those uniforms. I haven’t really had time to talk to the coaches or anything like that, but I am still open and looking forward to filling up the open days I do have to talk with coaches and players.” Recruiting nugget: Jai has strong ties with Arkansas and he really had great things to say about the Razorbacks. I would say with confidence that he is very much an Arkansas lean at this point and time.

On possibly playing for Coach Patterson: “He’s a nice man. I went to his house and he had some ice cream and cookies there for us and took a tour of his house. I know there is a bad side of him because I have heard about that (He laughed when saying that) but he truly is a nice man. Other than that, when it comes down to it, he is a good coach and he would treat me like a son.” On his recruitment: “I am very much open at this point.”

I got the chance to speak with Wilson for a few minutes about Texas Tech where he was committed since November of 2018. He committed under the old Tech staff and has not yet been in contact with the new staff even with him trying to contact them himself. Then on Monday, Wilson withdrew his decision from Texas Tech so he can look elsewhere. I’ll say this about Wilson, he was (In my opinion) one of the five best quarterbacks I saw this past Sunday and some school will be lucky to have him on board. It’s a shame that the new Texas Tech staff couldn’t figure something out and get in contact with him.

On Coach Miles: “I know what he did at LSU. I know it was kind of a run heavy offense and seeing how much of the reins he gives to his offensive coordinator will be interesting. I want to be able to drop back and throw the ball some. Being able to see how they handle the change there will be a big part for me and I think the coaching staff he has there now will be able to get the job done.” On Upcoming Visits: “I am going to take a visit out to Vanderbilt soon and maybe a visit to Princeton as well.”

On Big 12 Schools That Stick Out: “Oklahoma and Texas. Their coaches really like me, and both of their coaches treat me like family and that’s what I really like to see. Both places feel good.”
On Alex Grinch (OU DC): “We actually spoke on the phone about a week ago. I really like him, and I feel like they will have a good season ahead with him as the DC.” On Jason Washington (Texas CB Coach): “I talk to him almost everyday and send me something just about every day and I like that. He has great energy and he is lit. I really like that.”

Nathan Anderson, the four-star offensive lineman who plays at Frisco (Texas) Reedy High School, has Big 12 offers from Baylor, TCU and Oklahoma State. The 6-foot-5, 262-pounder would like to make his decision about his future this summer. He had just visited Baylor the weekend before The Opening and said the visit felt “very elite and exclusive.” Anderson also said TCU was attractive because “you know the coaches are going to be there when you leave.” But he had an advantage over some of the other participants in The Opening — The Star in Frisco is one of his home stadiums, since Frisco ISD schools play their varsity games in the facility. The Star is the training facility for the Dallas Cowboys and the indoor field doubles as an indoor high school stadium.

“The first time I stepped in here I was in awe, like ‘I’m going to be playing here for the next three years?’ It was hard to believe,” Anderson said. “But we come out here all the time and play so it just feels like home now.”

Prince Dorbah already has two Texas state championship rings as a member of the Highland Park Scots, located in Dallas, Texas. But the four-star outside linebacker, who comes in at 6-foot-2, 210 pounds, has a healthy number of scholarship offers, including Alabama and Florida. Big 12 schools Baylor, Oklahoma, Oklahoma State and Texas have also made offers, and 247Sports.com’s Crystal Ball has Dorbah going to Texas. He said he had a good relationship with all four Big 12 schools and that they were among the first schools to offer him, some as early as his sophomore year.

“During football season I set everything aside and I just focus on that,” Dorbah said. “Whether I’m committed or not (by then) I tell the (college coaches) not to hit me up because I’m focused on my teammates. It would be nice to get it done right now and be focused on (the season), but when I’m playing sports and I’m in season I set all that aside.”

Wide receiver Marvin Mims had a solid day at The Opening and was coming off an appearance in the regional basketball playoffs for his high school, Frisco (Texas) Lone Star. He played games on Friday and Saturday in Fort Worth before heading over to The Opening. He said he never gave a thought to not showing up.

The 6-foot-1, 165-pound receiver has Big 12 offers from Baylor, Kansas, Oklahoma, Oklahoma State, TCU and Texas Tech. Mims said he’d like to have a commitment made by the end of the summer.

“The highest thing for me is the education after football,” Mims said in terms of his decision-making process for a scholarship. “You have to think about how much you’ll play, the coaches and the relationships that you’ve built because I don’t want to be at a place where it doesn’t feel like home, where it doesn’t feel natural.”

Outside linebacker Brennon Scott was a popular player at The Opening and for good reason. The 6-foot-2, 220-pounder from Bishop Dunne High School in Dallas, Texas, has a plethora of offers, including Big 12 schools Baylor, Kansas, Kansas State, Oklahoma and Texas. 247Sports.com has Scott listed as a four-star recruit and projects Scott as a Texas A&M signee. But he said he intends to visit Texas, Texas A&M and Oklahoma as he tries to make a decision. He might also visit Baylor and Kansas. He made it clear during his conversation with reporters that he likes to blitz and that the schools he’s considering have all talked about how they can utilize him in that capacity.

Many players at The Opening had offers from Kansas, and Scott talked about what has him interested in at least considering the Big 12’s doormat program.

“It’s because of Les Miles,” Scott said. “He’s a great coach. And then he’s talked to me a lot about the position — what do they call it — the jacker? The Jayhawk? Whatever it’s called. But it’s that position where they want to blitz me, so I really like the relationship I’m building with Les Miles.”

Wide receiver Lawrence Arnold from DeSoto (Texas) has Big 12 offers from Iowa State and Kansas. The 6-foot-3, 175-pound receiver made some strong catches during his workout at The Opening. The three-star receiver, per 247Sports, said The Opening was the first camp of its type he had participated in. He’s hoping to make at least two visits this spring.

“I’m trying to get a visit to Illinois, and I want to line up a visit to Kansas coming up,” Arnold said.

Highland Park quarterback Chandler Morris spoke to reporters while wearing an Arkansas backpack. Now, that makes sense when you consider his father is Arkansas head coach Chad Morris. But the 5-foot-10, 172-pound dual threat QB, who led the Scots to a state title last year and was an MVP of The Opening, has nine offers on the table, including the Razorbacks. But Big 12 schools Kansas and Oklahoma are in the mix. He said OU’s success with Baker Mayfield and Kyler Murray speaks for itself. And while he admits some schools seem reticent to speak to him — probably due to some believing that him going to Arkansas is a done deal — Morris said his father wants him to make the decision that is best for him.

“It makes a lot of people shy away from me, I guess,” Morris said. “Some don’t seem interested in me and stuff like that. But at the end of the day he’s a dad and I’m his son and he’s going to be happy with my decision, whatever it is, and support me. He’s stressed to me that it’s my decision and that I should do what I want to do.”