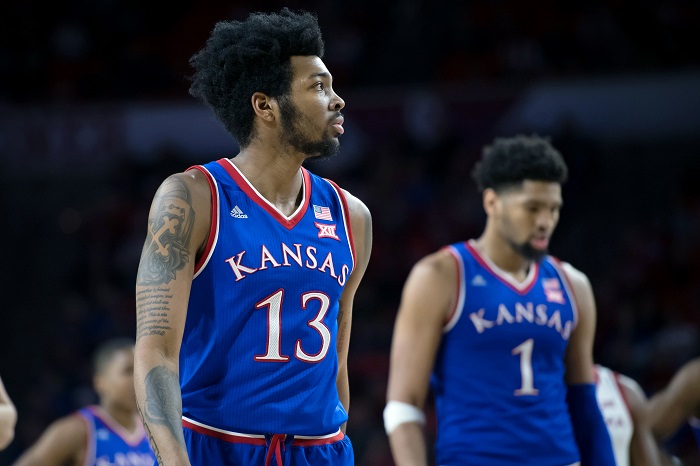 That’s what 14 years of excellence did to us. It lulled us into a false sense of security when it came to the Jayhawks’ hold on the Big 12. It’s not that the league is sub-par when you get below the Jayhawks. Far from it. Four of the last five seasons the Big 12 has been considered the top league in college basketball. This year the league may send eight teams to the NCAA Tournament, something that no 10-team league has ever done (hey, TCU, can you help us out?).

We all picked the Jayhawks to win the league in October. We all said that Kansas State had the horses to challenge them, of course. Some of us felt Texas Tech might have them, too. But, hey — it’s Kansas. Are you really going to pick against them in October? Or November? December? January? Any month?

I think we all thought that, at some point, Kansas and its head coach, Bill Self, would figure it out. But on Tuesday night, the figuring it out ran out as Kansas lost to Oklahoma, 81-68.

For the first time since the 2003-04 season, the Kansas Jayhawks (22-8, 11-6 in Big 12) won’t hold at least a share of the Big 12 regular-season title. That was Bill Self’s first season in Lawrence, Kansas, replacing Roy Williams. Oklahoma State won the league that season. Ever since, the top of the league’s regular-season standings has belonged to the Jayhawks, either solo or shared.

The 14-season streak represented the longest streak of its kind in major college basketball history, one season longer than UCLA. But with the loss to OU, the Jayhawks have the most road losses of any Kansas team since 1986-87 and the most conference losses since 1988-89. It is the end of an era. And Kansas looked completely unprepared to keep the era going against the Sooners.

It was Kansas’ worst loss of the season, and I’m not talking by score. Given that a Kansas win would have kept the Jayhawks in the race for the Big 12 regular-season title, their lack of energy and focus stood out. The Jayhawks — who have not been a good road team all season, but were coming off a road win at Oklahoma State — shot 40.9 percent from the floor, 22.6 percent from the 3-point line and had 15 turnovers. They were never really in it, which is as much on them as it is on the Sooners’ terrific evening, and we’ll get to that in a second.

Dedric Lawson and David McCormack each had 18 points for Kansas, but Lawson’s night was the kind of quality we expect from him. He also had 11 rebounds. McCormack, the freshman forward, shot 8-of-11 from the floor. But the rest of the Jayhawks were flat awful. Between Devon Dotson, Ochai Agbaji and Quentin Grimes — three freshmen who have contributed heavily to keeping Kansas in the hunt — were a combined 2-of-14 from the 3-point line. Marcus Garrett was 0-for-5 off the bench from distance.

If Kansas was looking to get a horrible performance out of the way before the Big 12 Tournament, well, they accomplished it on Tuesday night. The streak deserved better than that. Kansas will still be a tough out in Kansas City next week, but now the Baylor game on Saturday is, likely, for the No. 3 seed in the tournament, assuming Baylor wins its game Wednesday night. Oh, and remember Self’s first season, the one where Kansas didn’t win the regular-season title? The Jayhawks still made it to the Elite 8.

As much as this game was about Kansas’ streak ending, we can’t overlook what Oklahoma (19-11, 7-10) did in this game. The Sooners showed up. It’s almost like before the game they knew they needed to beat Kansas to get into the NCAA Tournament. In fact, ESPN’s Joe Lunardi, the network’s resident bracketologist, believed that a Sooners win would make them a tournament lock.

Brady Manek scored 21 for the Sooners, including a trio of 3-pointers. Guard Jamal Bieniemy scored just 7 points, but he dished out 8 assists, including this one to Manek in the first half.

Bieniemy to Manek for the dunk to keep #BoomerSooner ahead by 12. But make no mistake #RockChalk is re-energized and looking to climb back in this. #KUvsOU #Big12MBB @Heartland_CS pic.twitter.com/IMKr6gGReE

Meanwhile, Kristian Doolittle had a double-double — 24 points and 11 rebounds. The growth in his game this season has been terrific and when you consider that he, Manek and Bieniemy are slated to return next season, the future looks pretty bright in Norman.

Senior Rashard Odomes added 12 points. Christian James, the senior who has carried a significant load for the Sooners this season, had only 6 points but received a lovely senior night ovation, along with Jamuni McNeace and the rest of the exiting Sooners.

So, with the result of Tuesday’s game, well the race for the Big 12 crown looks incredibly simple:

If Texas Tech and Kansas State both win on Saturday, then the Red Raiders and Wildcats share the Big 12 regular season title.

If Texas Tech wins and Kansas State loses on Saturday, then the Red Raiders win the Big 12 regular-season title outright.

If Kansas State wins and Texas Tech loses on Saturday, then the Wildcats win the Big 12 regular-season title outright.

And I imagine there was much rejoicing in Lubbock, Texas, and Manhattan, Kansas, Tuesday night.

This cycle of Big 12 games wraps up on Wednesday. Iowa State hosts West Virginia at 6 p.m. on ESPNU while Baylor hosts Oklahoma State at 8 p.m. on ESPN2. Baylor and Iowa State are fighting for seeding in the Big 12 Tournament, with the Bears a game up on the Cyclones and have the season sweep. So a win Wednesday should wrap up at least the No. 4 seed for the Bears.