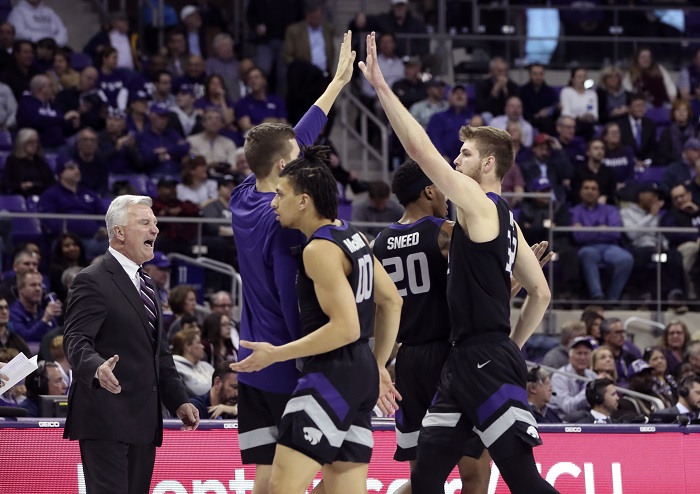 The Big 12 Men’s Basketball Tournament continues Thursday at the Sprint Center in Kansas City. HeartlandCollegeSports.com will be there for the entire event. Today we preview the second game of the Thursday afternoon session — Kansas State vs. TCU

Winner gets: a Friday semifinal game against either Baylor or Iowa State.

TCU: Noi. He’s been one of TCU’s most productive players this season, and his long, 6-foot-7 frame allows him to play the wing, shoot from distance and mix it up inside. He had a hot start for the Horned Frogs against Oklahoma State on Wednesday night, a 73-70 Horned Frogs win. Noi ended up with 20 points (including four 3-pointers), 7 rebounds and 3 assists. When Robinson drives to the basket to kick the pass out, Noi is one of the players he’s looking for. And Noi loves to shoot from the right wing side of the 3-point line.

Kansas State: Brown. If Dean Wade is unable to play in the Big 12 Tournament (K-State head coach Bruce Weber called Wade “doubtful” with discomfort in his foot earlier this week), Brown has to remain the focal point of the Wildcats’ success. He is the Wildcats’ leading scorer at 15.1 ppg and the team’s leading defender, who led the Big 12 with 2.1 steals per game. As Brown goes, so goes the Wildcats’ success in this tournament.

Kansas State: The Wildcats have been one of the most consistent teams in the Big 12 this season. Their only consecutive losses in league play where their first two. Since then the Wildcats went 12-2 in league action, including a three-game winning streak to end the slate. They’re certainly not the highest-scoring team in the league, but only Texas Tech can rival their overall team defense. They win games with a patient halfcourt offensive approach and take their transition points off their opponent’s turnovers.

TCU: The Horned Frogs shot 45.5 percent from the 3-point line vs. Oklahoma State, making 10 of them.

Kansas State: The Wildcats averaged 7.5 steals per game this season, best in the Big 12, just ahead of Texas Tech.

Who wins?: This is a tough call. Wade being out for K-State changes the complexion a little bit. The Wildcats and the Horned Frogs are used to playing with a short bench. But the pace of play is going to be critical for both teams. TCU wants to push the ball and you’ll see them try to play a lot of transition. Kansas State wants to play in the halfcourt. They only want to run when they’re doing it off of an opponent’s turnover or a long rebound. There is a part of me that wants to take TCU here. But the Wildcats have been through life without Wade before. They’re used to it. It’s not that jarring for them anymore. TCU has to play on less than 24 hours’ rest. With its depth issues, that hurts too. But defense travels, as they say. I’m betting that K-State’s defense can influence the outcome more than TCU’s offense. The Wildcats advance. Just don’t expect it to be easy.