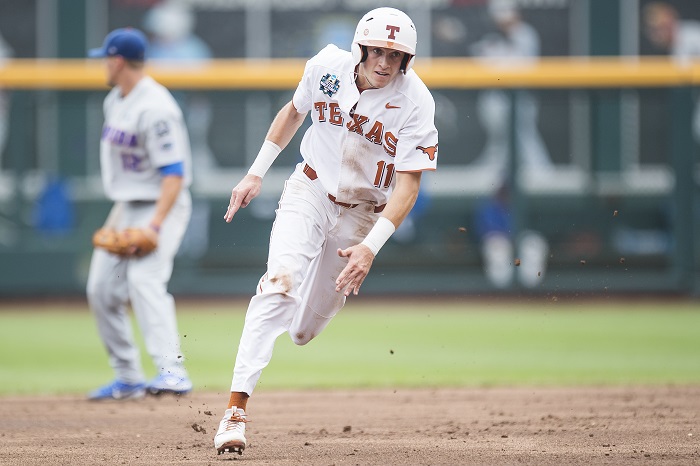 There is a famous scene in the movie Moneyball where Billy Beane is battling scouts over the way he wants his franchise to be viewed. Oakland had just lost three key players and had a tight budget. Beane’s assistant came up with a formula for how to replace the runs those key players manufactured: on-base percentage.

Duke Ellis gets on base. He is the only player to top Texas Tech’s Josh Jung for the 2018 Big 12 batting title. Despite hitting just one home run all season long, Ellis had a .390 batting average and a .484 on-base percentage against Big 12 opponents. Home runs are fancy, but many sluggers struggle to get on base. You see their strikeout numbers in the stratusphere. Ellis gets on base. When he’s on base, he’s dangerous. The 6-foot-2, 170 pound junior is a thorn in the side of every defense. Not only is he a tough out at the plate, but he is highly successful in stolen bases too. In 2018, he was successful in 16 of his 18 steal attempts.

Prior to his arrival at Texas, Ellis had produced more triples (5) at Panola Junior College than home runs (4). A 20th round draft pick in 2017, Ellis will be draft eligible again this season.