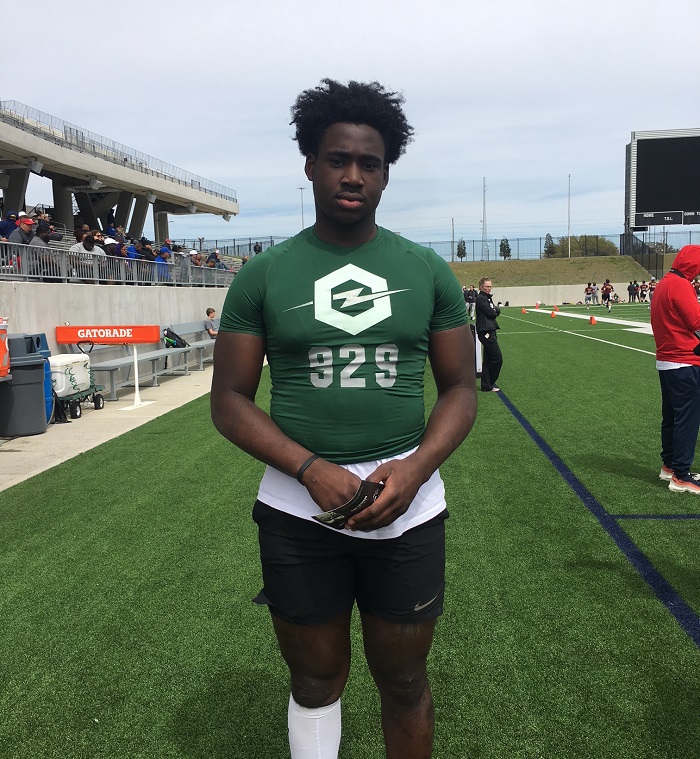 Katy, Texas- This past Sunday, hundreds of future college athletes hit the field going through drills and most importantly, competing against one another. At camps like The Opening, you can see the best of the best compete and if you are a player like Princely Umanmielen, you are most likely going to stick out (In a good way of course). It didn’t really matter who Princely lined up against because he won just about every single rep he took against opposing offensive lineman. Keep in mind, these aren’t just any lineman, the guys he went up against are legit division one players on the offensive line.

You could have made an argument for Princely to win Defensive lineman MVP for the Houston regional camp, but he did end up making the top five overall on the defensive line. Princely is a VERY highly sought-after player with 19 total offers and just about every Big 12 school wants him. However, there are two Big 12 schools that seem to really have the attention of the four-star defensive end from Manor, Texas and I had the chance to catch up with Princely after his camp performance.

HCS: What was the most important thing you learned from the coaches at this camp today?

Princely: “Using my hands more and coming up with a game plan before the snap.”

HCS: What are some of the Big 12 schools that stick out to you right now?

HCS: How do you see yourself fitting at Texas or Oklahoma?

Princely: “I really see myself fitting in at Oklahoma because of their defensive scheme and how coach Grinch (Oklahoma DC) is trying to use the defensive line now. And with Texas, I have a really close relationship with coach Herman (Texas HC) and coach Giles (Texas DL).”

HCS: You are close to Austin, does sticking close to home play a factor in your decision?

Princely: “It really doesn’t play kind any factor in my decision. It has played a little factor in my recruitment because I have visited Texas so many times and it is close to my house.”

HCS: You mentioned coach Grinch at Oklahoma but what are your thoughts about coach Orlando at Texas?

Princely: “I feel like he is a real intense guy. I am not too fond of the three-man front but if Texas is a school I am comfortable with and if I want to go there, I will make it work.”

HCS: What is the one biggest thing you want to work on this summer?