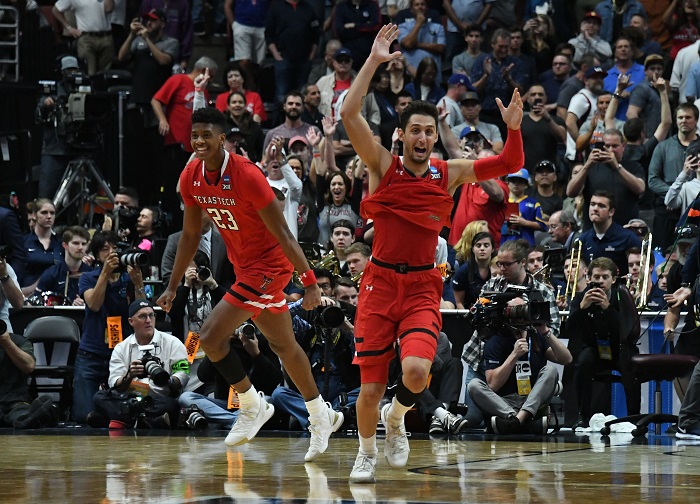 The Texas Tech Red Raiders are going to the NCAA Final Four for the first time in program history.
The Red Raiders (30-6) defeated the Gonzaga Bulldogs (33-4), 75-69, in the West Region Final on Saturday evening, securing the Big 12 a spot in the Final Four in Minneapolis next weekend.

Jarrett Culver led the Red Raiders with 19 points, but Matt Mooney had a fantastic game filling the gaps when Culver has scoring droughts, as he scored 17 points. Davide Moretti added 12 points, including two huge 3-pointers in the final minutes, his only made 3’s of the game.

At no time did either team have a double-digit lead, but the Bulldogs did struggle from the field when it mattered, making just three field goals in a 12-minute stretch leading into the final two minutes of the game, at which point Texas Tech had a five-point lead.

From there the Red Raiders maintained that lead and even pushed it to 6 points, courtesy of a huge 3-pointer by Moretti with 1:40 left.

Tariq Owens, who had 9 points, 7 rebounds and 5 blocked shots, made his last blocked shot count in the final minute with this block of a Gonzaga 3-pointer, a shot that if made could have cut the lead to 3. There was controversy over whether Owens was in or out of bounds when he grabbed the ball to throw it back inbounds. But with no ability to replay it, the Red Raiders drew a foul and Brandone Francis made one free throw to make it a 7-point game.

Gonzaga did get the lead down to two points with 22 seconds left, helped by a Josh Perkins 3-pointer. After the two teams traded points to keep it at a 2-point Tech lead, Tech’s Mooney went to inbound the ball with 11 seconds left and was fouled by Perkins, who reached across the baseline to jar the ball loose. The official called a technical foul on Perkins and Tech sent its best free-throw shooter, Moretti, to the line. He made both to give the Red Raiders a four-point cushion. Texas Tech also got the ball, inbounded and Culver drew a foul and made two more three throws to secure the victory.

Texas Tech becomes the fifth Big 12 team to reach the Final Four since the league was formed. Kansas, Oklahoma, Oklahoma State and Texas are the others. The Big 12 has sent a team to the Final Four in three of the last four seasons.

Jalen Hurts Just Sold Me on His Future OU Success
Texas Tech to Final Four, Chris Beard Rumors, Texas and TCU to NYC: The Good, the Bad and the Ugly
To Top