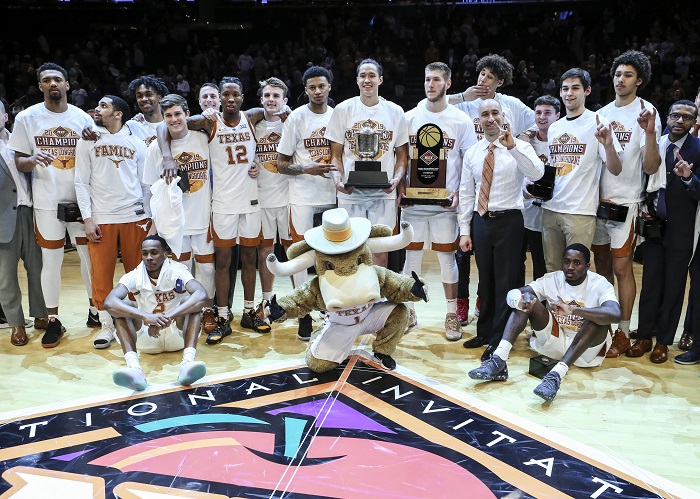 Abe Lemons and his traveling circus of a 1978 Texas NIT championship team now has company.

The seniors led the Longhorns to an 81-66 win over Lipscomb in the NIT Championship game Thursday night in Madison Square Garden. The title is Texas’ second NIT championship overall, and first in 41 years.

Dylan Osetkowski had 19 points and 11 rebounds, a double-double to end his Texas career. Senior guard Kerwin Roach II had 16 points on 50 percent shooting off the bench. Both received a curtain call from Texas fans in the final minutes of the game.

The Longhorns were disappointed after failing to reach the NCAA Tournament. But for players like Osetkowski, that didn’t matter after beating the Bisons (29-8).

“You can feel deflated on Selection Sunday when your name’s not called,” Osetkowski said. “But we finished strong and we’re happy being champions.”

As they did in their win over TCU in the semifinals, the Longhorns (21-16) played exceptional defense, holding the Bisons to 39.3 percent shooting and holding their best player, Garrison Mathews, to 15 points. While Mathews went 10-for-10 from the free-throw line, he shot 2-of-10 from the field and didn’t make a shot until 30 minutes into the game. Rob Marberry picked up the slack with 17 points, but it wasn’t nearly enough.

Texas shot 44.4 percent from the floor, but of more importance was the Longhorns’ 13 3-pointers, which allowed the Longhorns to build a 14-point halftime lead (with the additional help of a 22-5 run to end the half) and maintain that lead throughout the second half. Every time it seemed the Bisons put together a small run to cut into Texas’ lead, the Longhorns answered. One run seemed critical to keeping the Longhorns in the driver’s seat.

Mathews with a 3 for #Lipscomb cuts the lead to 10. It’s his first FG. And Febres answers for #HookEm. Now the lead is back to 13 with 7:55 left. Every time the #Bisons seem to get momentum #Texas quells it. #NIT


At that point, the Longhorns were firmly in control.

The rest of Texas’ starting lineup is returning next season and all played a role on Thursday night. Jase Febres added 17 points, including four 3-pointers. Matt Coleman III hit a pair of 3-pointers, which led to 11 points. He also had 7 assists. Courtney Ramey only scored 3 points, but head coach Shaka Smart pointed out at halftime that Ramey’s defense on Mathews was key to getting the lead. Jericho Sims, who could end up reclaiming a starting role as a forward next season, had 4 points and 4 rebounds.