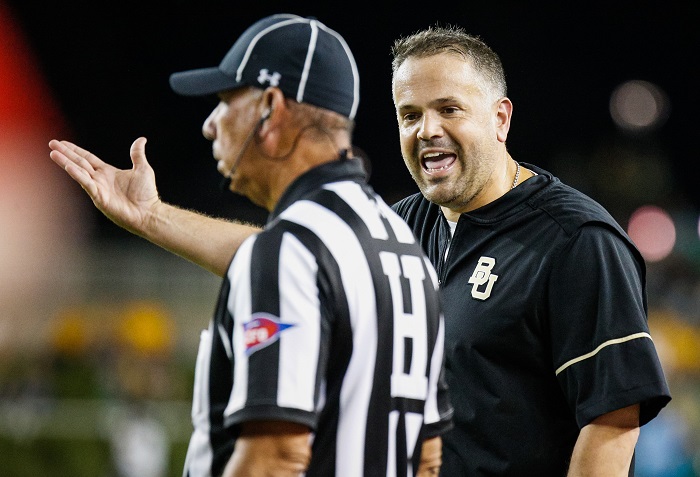 It’s that time of year again when we’re all sitting around excited for summer, but also trying to peek ahead to get closer to the college football season. There are only 112 days until the first full Saturday of college football, but who’s counting, right? Definitely not me.

So, let’s get to our best-case and worst-case scenario for each team in the Big 12 Conference. It’s the time of year when fans want to look at the schedule and see everything that can go right, but let’s be honest, there will be a team that will have the kind of season where everything goes wrong. So, let’s go to Waco, Texas and take a look at the Baylor Bears.

The Bears are looking to take that next step under Matt Rhule after jumping from one win to seven wins last season. The easy part comes with a non-conference schedule that was always preferred by former head coach Art Briles, which is a non-conference schedule with limited competition. Baylor MUST be 3-0 against Stephen F. Austin, UTSA and Rice if it wants to be taken seriously in 2019. This is the weakest non-conference schedule in the Big 12. After that, we’ll get our first real feel for what the Bears are in the Big 12 opener against Iowa State. That game is followed by at Kansas State, vs Texas Tech and at Oklahoma State. In a best-case scenario, Baylor is 3-1 in those four games. Iowa State at home is not easy and road games at K-State and Oklahoma State have tripped up many good teams over the years.

At this point the Bears would be 6-1 on the season and have a mini-bye week. They play Oklahoma State in Stillwater and then it’s a Halloween, Thursday night game against West Virginia in Waco. After that game it’s a very tough three-week stretch at TCU, vs. Oklahoma and vs. Texas. TCU is obviously the Bears’ biggest rival and then they get the two heavy hitters in the conference (and likely favorites). A 3-1 stretch would put Baylor in position to crash the Big 12 Championship Game and then they would cap off the season with a win over Kansas and a 10-2 finish to the regular season.

The Bears are then 3-1 and have two tough road games in three weeks with Kansas State and Oklahoma State, while Texas Tech at home is sandwiched in the middle. A disappointing 1-2 record in those three games puts Baylor at 4-3 at the “halfway mark”.

A Thursday night home match up against West Virginia isn’t quite as ugly as last year’s 58-14 WVU drubbing, but Neal Brown is starting to make his mark in Morgantown and Baylor drops a tough one at home on a Thursday (Halloween) night. However, there’s no rest for the weary, as Baylor then needs to face its biggest rival: TCU in Fort Worth. And there is no time to look ahead with Oklahoma and Texas on deck. An 0-3 stretch, followed by a win over Kansas to close the season results in a 5-7 season for Matt Rhule and the Bears. 2019 turns into a step backwards for Rhule and the rumors of whether or not this is the offseason he’s finally pulls the trigger on those wandering eyes in the NFL.