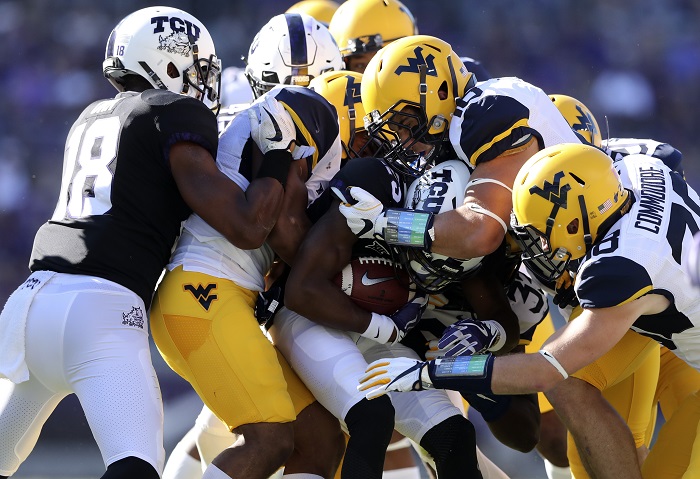 Welcome to the HCS Big 12 mailbag. This mailbag is for all you football junkies out there who root for a Big 12 school who not only have questions about your team, but other teams in the conference as well. So, join me, grab a cold brew or your favorite drink and relax as I answer all your Big 12 questions in my mailbag. For those interested, I will send out a tweet (@Derekduke25) every Monday at noon until last call (No, not 2 AM) at 8 PM CT for you to send in your questions to be answered every Tuesday right here at Heartland College Sports. Due to Memorial Day, I pushed the mailbag back a day. I thought it would be in everyone’s best interest to remember those who served and didn’t make it back home. Remember why we can live freely and be sure to always thank those who are currently serving and those who have previously served in the military. Now back to the intro.

I will pick the best question for each mailbag and label it as my question of the week. The winner gets a free HCS Koozie to keep your beer cold (Unless you like it warm, but that’s just plain wrong). It was busy question day which tells me that this mailbag is working harder than me at my day job. Unlike the “Big 12 blog” over at ESPN (I say that loosely because one story a month is a tragedy), we here at HCS are determined to give you the best Big 12 coverage on the planet. I want to thank each one of you who submitted a question this week and for those reading, I am glad you could join me. I am doing this on a Wednesday afternoon and of course this mailbag wouldn’t be nearly as fun without a cold beverage right next to me. Today’s drink of choice? A minted man. A little mint, sugar and a lot of vodka. Make it a double. Cheers!

Duke: About a month or so ago I ranked Bowman as the fifth best quarterback in the Big 12. I did mention that he could soar up that list if he would stay healthy. In your question he is so obviously my opinion on him changes a bit. It would be smart of me to mention that I had Tech finishing 7-5 this upcoming season along with a trip to the Cheeze-It Bowl. Speaking of Cheeze-It, damn those things are good. But, to answer your question that 7-5 prediction was pretty align with Bowman being healthy. As much as I like Bowman as a quarterback, I like the fact that he will have a veteran offensive line in front of him and hopefully WR T.J. Vasher will take that leap we all expect him to finally make. The questions I have surrounding Tech is the defense. They have some nice pieces here and there (I really like LB Jordyn Brooks) but overall, I have a hard time seeing them be good on that side of the ball. In typical Tech fashion, I expect those classic shootouts they always seem to get into and when you dance with the devil like that, you will win some, but you will also lose some in the conference playing that way. I’m sticking with 7-5 but I wouldn’t be surprised at all if they wound up 8-4. Tech will be a tough out for anyone in Big 12 play, but I still have them in the middle of the pack in the Big 12.

@RPTexan asks: Everyone asks who’s underrated but I want to know who are the most overrated players in CFB? I think Ehlinger is overrated simply because everyone has put him in the Heisman top five. Good player though.

Duke: I hate saying that someone is overrated because at that point you are just crapping on a player, but I wouldn’t really be a good person to ask that on a national level. But if I had to say on the national level, I have a team and one player that I think that are getting way too much love right now. Team wise, it is Nebraska for me. In fact, the other day I saw some CFB Twitter page have them in the CFB play off. Really? A team that won four games last year is going to run the table this season and get into the playoff? No clue what the person was smoking but it must have been powerful. Maybe they wanted attention but, they just came across as stupid in my book. As far as a player I do have one in mind who is getting NFL attention and attention across all of CFB. That’s Oregon quarterback Justin Herbert. I know he has the size of a prototypical NFL quarterback, but I have seen him multiple times on tv and I rarely come away impressed with him and I don’t think he lives up to the hype people give him. Sure, he makes a throw here and there that makes you saw wow, but his completion percentage last season was under sixty percent. Plus, like I mentioned earlier that he sometimes disappears in games that I saw. Maybe he has a magical season this year but based on his current track record, I don’t get the hype everyone is talking about.

@ChiefQueefYo asks: How in the first round is Manoah from WBI going to go in the MLB draft and how about them EERs hosting a regional?

Duke: A couple things before I get on my little rant here. First off, what is up with that Twitter handle? How drunk were you when you decided on that name? I would also like to know the other Twitter names you were considering before you said “Yep, this is the one.” As far as Big 12 baseball is concerned, I would have to toss this one to our baseball guy Cameron Brock. Although from what I have read it appears Manoah will be a top fifteen pick. But seriously, that name though.

@Vectoze asks: TCU and WVU have been in the Big 12 for about seven year now. What are their most heated conference rivals so far?

Duke: Is it rivalry week already? Sometimes I feel like the conference lacks rivalries but, there are some interesting ones. Bedlam, The Red River Showdown, The Sunflower Showdown and so on. But for WVU I would have to say it’s either Texas or Oklahoma. I’ll lean Oklahoma here. There have been some good games between the two programs over the years and I will never forget the 2012 matchup that was incredible. That 50-49 shootout was an instant classic and even their last matchup in Morgantown was fun to watch although the 2016 game didn’t live up to the hype. Even though the Mountaineers haven’t beaten Oklahoma since joining the conference, I think that would be considered their biggest Big 12 rival.

For the case of TCU, without a doubt it’s Baylor. Going back to 2014, these two school just flat out HATE each other, and I absolutely love it. The Art Briles (Who could be the possible second coming of Satan) and Gary Patterson feud was awesome and if Briles wouldn’t have tried to cover up sick things in Waco, this could still be a great rivalry. TCU has won the last five matchups but Matt Rhule has things turning in Waco so I think this rivalry will start heating up once again.

@mlevere1992 asks: How good was the interception that lead to your mailbag gif?

Duke: For those who don’t follow me on Twitter (@DerekDuke25), my mailbag tweet included a gif of Iowa State’s Marcel Spears picking off Texas Tech QB Nic Shimonek for a pick six back in 2017. It was a screen pass and Marcel read it perfectly and made a great play. I’ll give it an 8 out of 10 all day long. Iowa State kicked their ass that day.

@maxdijion asks: What are your top three tailgating songs?Duke: I am going to take the easy road here and not give you a straight answer because that would be way to logical for my line of thinking. It would take me months of trying to think about that and just when I would come up with three songs, three more great ones would pop into my head that I completely forgot about. It’s been awhile since I have tailgated for a college football game and most of the time there was a 50/50 chance of getting a little too rowdy before the game. Ok, maybe more but sometimes nothing is more fun than a great tailgate. All I need is some alcohol, food and music whether it be Texas Country (My preference) or some old school hip hop. Hell, with some alcohol in me, I would even listen to Techno whish is straight up trash. Don’t @ me on that.