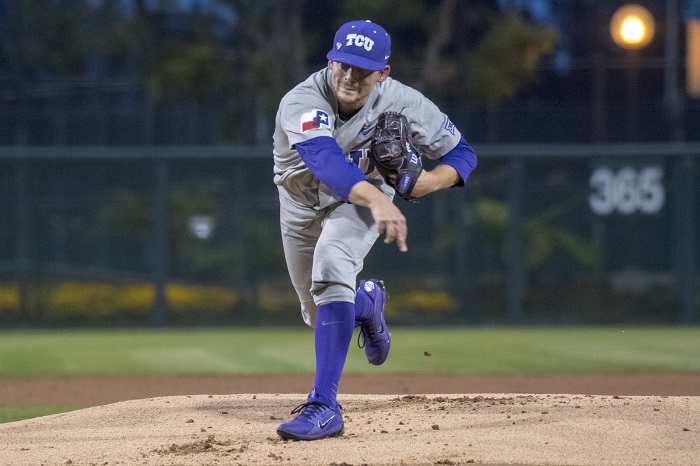 *All games will be played at Baum-Walker Stadium

This one is up for grabs. Unlike the other four regionals, top seed Arkansas isn’t really a heavy favorite. Sure, the Razorbacks are coming off a National Championship appearance where they fell short and remember the pain this year. However, look at the rotation. Two of their pitchers have over a 3.70 ERA. While the Razorbacks lead most of the statistical categories in this regional, they barely edge out Cal and TCU. The Friday night matchup will be a doozy. Nick Lodolo and Jared Horn are primed to become high round draft picks next week. It should be an excellent dual against two teams who can produce plenty of offense. After that, it gets interesting. First off, if TCU wins, does Schlossnagle send Jared Janczak to the mound against Arkansas? Janczak has battle through injuries throughout his career and is having, by far, his worst season. Despite this, he racked up 12 strikeouts in six innings during his most recent outing. During those six innings, he surrenedered two earned runs on four hits and two walks. Sure, that’s still not the Janczak will know, love and miss. However, that’s an excellent sign that he could provide quality innings during this NCAA Regional and maybe further down the road.

Offensively, Arkansas, Cal and TCU are all in the top 30 nationally for batting average. Not one of them is in the top 20 though. If Cal and TCU pitchers can keep the ball in the park against Arkansas, the Razorbacks likely do not win this regional. If Arkansas can turn this into a slugfest, they win in three games easily. The hogs are No.12 nationally with 78 home runs. The next team in this regional is TCU at No.42 with just 60. Take away the long ball and Arkansas is done for.

It’s really a three-team race in this regional. Janczak could be the x-factor. If given the chance after a victory over Cal, I think TCU wins this regional under two conditions: Janczak provides a quality 6-inning start and leaves with the lead.

This regional likely spills into Monday. As for Central Connecticut State, they’re 0-10 all-time in regionals and haven’t really been competitive in any of them. They aren’t a major concern.