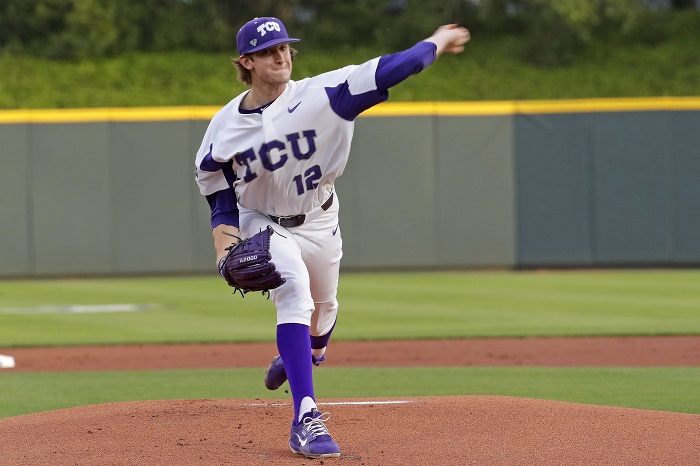 The Big 12 Conference is where baseball players are bred.

It’s more proof that the Big 12 dominates in baseball. Oklahoma commit Bobby Witt Jr., who is the son of former Texas Ranger Bobby Witt, was taken second overall by the Kansas City Royals. When asked who Witt reminds him of, MLB Draft expert Jim Callis compared him to Kansas City Chiefs star and former Texas Tech quarterback Patrick Mahomes. Mahomes, of course, played one season of baseball at Texas Tech. The comparison was more in regards to Mahomes’ star power and personality. It’s highly doubtful the younger Witt will play for the Sooners, but in large part, this is what schools actually want. When they are receiving commitments from first round draft picks out of high school, it proves that they can acquire talent. Sometimes, players decide to forego the money and continue their education. In Witt’s case, with his pedigree and likely contract, it’s unlikely. Brett Baty, of Lake Travis, is more likely than Witt to forego the money and enroll in the University of Texas. He’s not in the top 10 picks. The pick value at No.12 is $3 milloin less than the No.2 pick value. Lake Travis is right in the backyard of the University of Texas. Of course, Lake Travis is also a very wealthy area, so Baty might decide to play Minor League Baseball and still enroll into Texas.

The Cincinnati Reds bolstered their pitching with quality left hander Nick Lodolo. Lodolo has added 30 innings, but dropped his ERA nearly two full points in 2019. The crafty lefty hasn’t had much luck record-wise, but that’s because TCU has lost tons of offense over the course of Lodolo’s career. MLB was wise in ignoring the terrible record and made an excellent decision in drafting Lodolo.

Texas Rangers fans have to be ecstatic about Josh Jung. He drew comparisons to Alex Bregman, the Astros star and former LSU standout, who is lighting up the world in Houston. Jung is a solid defensive third basemen, currently playing shortstop for the Red Raiders. Jung is a five-tool player with a career .347 average and 29 home runs during his three seasons with the Red Raiders.

Shea Langeliers has been one of the key pieces in Steve Rodriguez’s bunch. Atlanta is going to get that lovely combo of an excellent hitting catcher that can play defense too. Langeliers has hit at least 10 home runs all three years of his career, and posted over a .300 average in two of his three seasons at Baylor. He did not commit an error this season.

Alek Menoah is probably the biggest reason West Virginia hosted a regional this year. Menoah has produced two shutouts this season, and his ERA has dropped to a 2.08. He had 40 more strikeouts this season than his previous two years combined. Menoah is a prospect that has risen and will continue to rise. At this pace, he will be an MLB ace.

Also drafted on day one was Quinn Priester, a TCU commit out of Illinois. Baylor’s Davis Wendzel and Brandon Williamson. Wendzel has been a stud for Baylor all three seasons he’s been there. He’s hit over .300 with eight home runs each season. The ol’ marketing department will love to see him in “the show”. He’s got long hair and an impressive beard. There are certain to be some promo ideas to come out of that.

Williamson is a community college product who was drafted in the 36th round last year. He’s made quite the move up the board, but it’s kind of puzzling to us why. His ERA is above four. He lasted just four innings in two of his last three starts. He’s very inconsistent. The scouts clearly found something they loved about him though. The top five rounds are expected to make it to the majors.

Big 12 will be Represented in the 2019 College World Series
2019 Super Regionals Game 1 Preview: Oklahoma State at Texas Tech
To Top