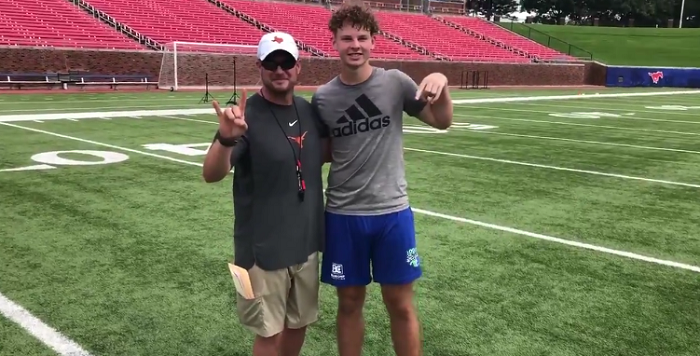 There’s trolling and then there’s… trolling. For one Oklahoma Sooners fan, he got his viral moment over the weekend.

Parker Andrews is a soon-to-be freshman in the Oklahoma City area and he happened to be down in Texas for a football camp. At the camp, he met Texas head coach Tom Herman. Well for Andrews, clearly an Oklahoma fan, this was his moment.

As you can see in the video below, as they go to take a photo together, while Herman is looking at the camera, Andrews flips to “Horns Down”. I love how Herman looks over at him twice, somewhat confused, as if he didn’t know whether or not Andrews was done with the photo or if he was really going “Horns Down”.

I took my soon-to-be 9th grade son, @Parker32Andrews , down to a Texas last Sunday for football camp and he had an opportunity to meet Texas’ coach, Tom Herman. Parker never wastes an opportunity! 🤣😂#ClassOf2023 pic.twitter.com/V6sXS1rJIp

Regardless, should Lincoln Riley be offering Parker Andrews a scholarship before he plans a down of high school football, just because?