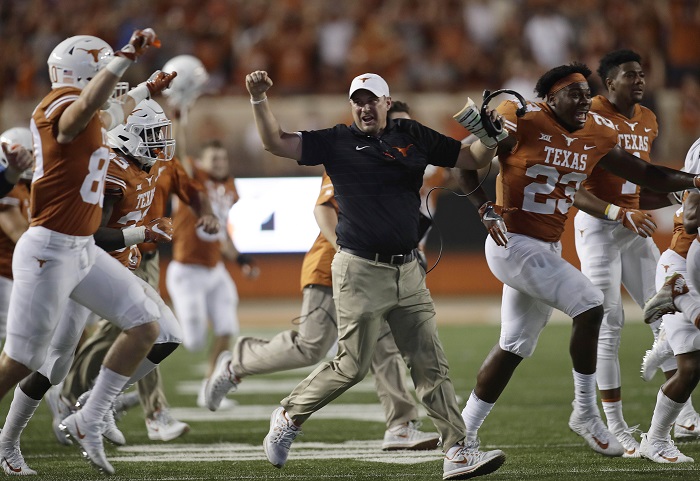 So let’s look at the Big 12 conference and expand on how every team can have that magical season. Let’s get to the Texas Longhorns.

Editor’s note: Below are the previous teams we’ve discussed.

Well, the Longhorns are expected to be fully “back” this season after Tom Herman led the program back to the Big 12 Championship Game and then upset Georgia in the Sugar Bowl. But for Texas to meet those expectations, it starts under center with Sam Ehlinger, who returns with the most experience in the Big 12 of any quarterback. Ehlinger needs to establish himself as the best quarterback in the conference for Texas to meet its goals. The combo of WR Collin Johnson and RB Keaontay Ingram needs to be one of the best 1-2 WR-RB duos in the conference, if not the best. But of course much of that will hinge on the big boys up front, which has remained a work in progress since Herman took the job. However under Herb Hand’s tutelage and a unit that is more experienced, that next leap is entirely possible.

The defense has been the crown jewel of this team the past two years thanks to Todd Orlando. But Orlando is now tasked with replacing eight starters. If Caden Sterns helps lead this secondary to be the best in the Big 12, UT is in very good shape.

Now to the schedule, Texas has a very difficult first half of the season. The non-conference game against LSU doesn’t matter in terms of winning the Big 12, but it will be a major mental and physical strain for UT. Two weeks later Texas opens conference play at home against Oklahoma State, who upset the Longhorns last year in Stillwater. It doesn’t get much easier in October, by going to Morgantown, which is always trick even with a possible rebuild for WVU, then back to Texas to play OU in Dallas, home to Kansas and at TCU. Between September 22nd and November 8th, Texas will play just one game at Texas Memorial Stadium. If Texas can come through this stretch with just one loss, they’re in very good shape. November will need to be flawless, starting at home vs. Kansas State, but then it’s at Iowa State and at Baylor, before wrapping up at home vs. Texas Tech. Ideally, Texas must finish 4-0 in November, but with the Big 12 as deep and stacked as it is, another two-loss team can likely make the Big 12 Championship. Then, the Longhorns are back in AT&T Stadium and will have a chance to get over the hump they failed to last season. Do that? Then Texas really is back.

The Pac-12 is Such a Disaster it’s Considering 9 a.m. Games
The Big 12 Dominates on Difficult Non-Conference Scheduling in 2019
To Top