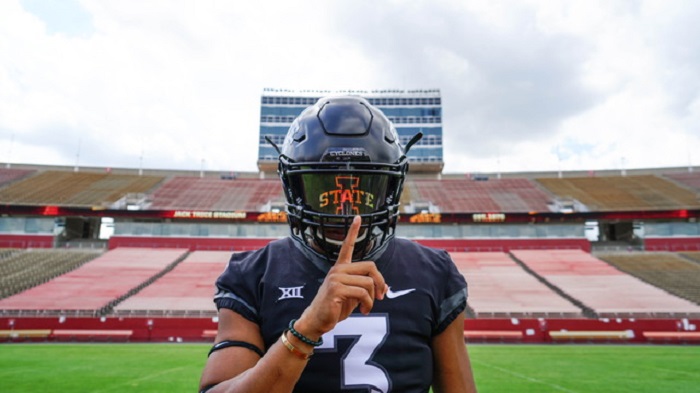 Iowa State has landed their eighteenth commitment for the 2020 class from 3-Star safety Mason chambers out of Schertz, Texas (Samuel Clemens HS). Mason had over eighteen offers to choose from such as SMU, Army, Navy and Houston but ended up choosing Iowa State on local television here in San Antonio.

In the last month and a half, Iowa State has landed a trio of players (Jordyn Morgan, Daniel Jackson and now Mason Chambers) from the San Antonio area. All three players took a visit back on June 14th and now Iowa State has commitments from all three.

“The culture there is remarkable. You can tell coach Campbell is more than just a coach. He is trying to build his players into men and I honestly just felt really comfortable there compared to other places I have visited,” Chambers said. “I heard the fan base is insane because of the lack of a professional team there. Iowa State is basically the professional team, so everyone goes to the games.”

Iowa State has thrived under defensive coordinator Jon Heacock the past couple of years and Chambers sees himself fitting right in, saying, “They want me to play the star position but of course they want to me know all three safety spots. I think my game resembles Greg Eisworth’s and I can see myself stepping into his shoes once he leaves with no drop off of intensity.”

It’s not often you see three San Antonio players going to the same out-of-state school, but Chambers added, “It’s like icing on the cake. It is going to be an awesome experience to go through with some guys that I grew up with.” And when I asked if there was anyone else from San Antonio, he would like to get to Iowa State he said, “Devin Grant,” the 2020 3-Star defensive end that currently is committed to Colorado.

Iowa State continues to remain hot on the recruiting trail as they continue to fill up their 2020 class. As of right now, Iowa State remains in the top 35 nationally for the 2020 class according to 247 sports and is third in the Big 12 just behind Oklahoma and Texas.

Big 12-SEC Challenge Highlighted by Texas Tech vs. Kentucky
How Can Each Team win the Big 12 Conference in 2019: Iowa State Cyclones
To Top