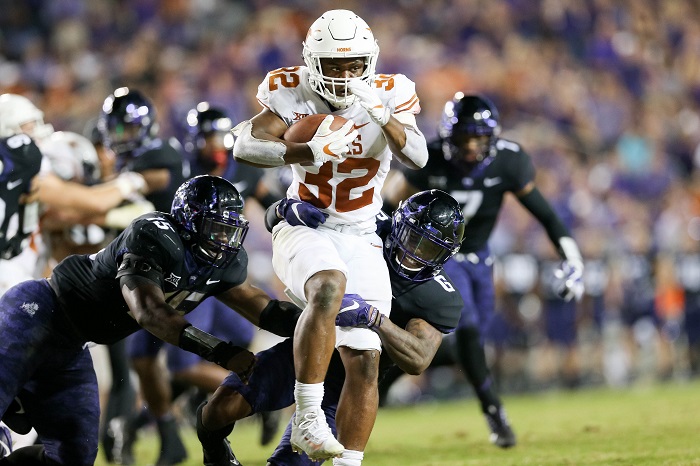 You always like to see when a player in today’s college game has the maturity to handle not getting exactly what he wants. In the wake of quarterback Tate Martell losing out on the Miami starting QB job months after transferring from Ohio State, Texas running back Daniel Young shows exactly how grown men handle these situations.

Young came out of high school as a top 50 running back in the country and top 100 player in Texas. He’s entering his junior season with the Longhorns and probably hasn’t gotten as many touches as he’d like, but you could say that about most running backs in the college game.

Young was recently asked why he stayed at Texas when he could’ve transferred and received more carries elsewhere. His response was gold, saying, “I’m here to play, not decide playing time…I just work on things I need to work on. And if I’m not playing, there’s something else I need to work on.” You can see the video below.

VIDEO: RB Daniel Young was asked why he stayed at Texas when he could've left to seek more carries elsewhere.

As a freshman in 2017, Young finished with 18 rushes for nearly 400 yards, but last season his production fell to 42 carries for 153 rushing yards. But unlike many others who could have been in his shoes, he is not running from Austin, Texas. Instead, as he’s said, “there’s something else I need to work on.”

That is as great of a winning attitude as I’ve seen lately at the college level when it seems like everyone who doesn’t get what they want is entering the transfer portal. Count me in as a Daniel Young fan.