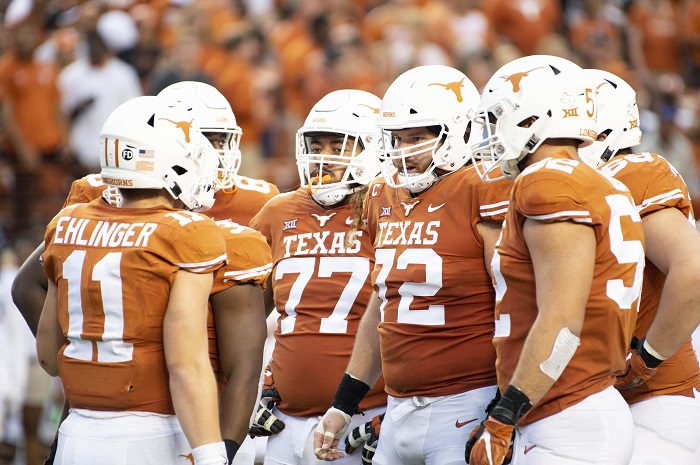 The game of football is a war, and going into battle without a strong, dependable front line leads to defeat more times than not. Any good coach, no matter what position he favors or played back in his heyday, will not hesitate to say that games are won and lost in the trenches. An offensive line is not only just there to protect the quarterback, but also to create lanes for the running game. Whether you call them the “Big Uglies”, “Hog Mollies,” or just fat guys in shoulder pads, these hard-nosed young men are the foundation of any dynamic offense. So, as you sit at home or work counting down the days until kickoff, I have countdown of my own for you… the best offensive lines in the Big 12 Conference.

Also, if you missed it, here are the other categories we have ranked thus far:

I said this on a podcast awhile back but if you think about it, this is the best offensive line Texas has had in years and it is not even close. When you look at this starting five across the board, it helps you to see why I ranked them number one. LT Samuel Cosmi is going to be a household name and an All-Big 12 selection at the end of the year. Book it. Meanwhile Parker Braun (Georgia Tech Grad Transfer) was an All-ACC selection last season and then you have C Zach Shackelford who is an All-Big 12 selection himself. The right said of the line is going to be the “weaker side” but Derek Kerstetter has shown progress playing early (15 starts) and now it is time for Denzel Okafor to step this season and take over the right tackle spot. Give Herb Hand (Texas OL Coach) a lot of credit for really turning around a unit that has been a weakness in Austin for the last few years.

I am not going to lie to you, I was a little shocked at myself for putting TCU this high, but I really do believe they deserve some hype this season. I know TCU had some serious offensive struggles last season but a lot of that was put on the bad quarterback play from a year ago. Hell, TCU couldn’t throw the ball worth a damn towards the end of the season. The Frogs may have the best tackle duo in the conference with Anthony McKinney and Lucas Niang (All-Big 12 Player) and I think that RG Austin Myers is VERY underrated as well heading into the season. With those three leading the way, it makes me fell good about the Horned Frogs line and also, they will get back LG Cordel Iwuagwu (Thank God I didn’t have to try and say his name) from injury which should be huge as well if he can stay healthy. Probably the only true question mark is the center spot where Coy McMillon and Kelton Hollins (11 starts last season) will battle it out. Still, this group gave up the fewest sacks in the conference last season and if they can take another step forward this season, it will be a huge plus for this offense that really struggled last season.

I can hear it already, “But, Derek they lost four guys to the NFL Draft earlier this year! How can they possibly be ranked this high?” I have got a name for you. Bill Bedenbaugh. He is the best offensive line coach in the entire country. Sure, C Creed Humprhey is the only returning starter but my faith in coach Bedenbaugh tells me that no matter what, this unit will be one of the top spots because as good as Lincoln Riley is calling plays, Bill Bedenbaugh is just as good putting together a solid offensive line. It may take a few games and a few lineup changes here and there but ultimately, Oklahoma has the talent to make something work well up front and when you have the best offensive line coach in the country, it is a recipe for success no matter how many starters you lose.

While the two teams below OK State did a solid job protecting their quarterback but struggling in the run game, Oklahoma State was just the opposite of that last season. They didn’t do a good job protecting their quarterback but were fantastic in the run game last season as Justice Hill and Chuba Hubbard shredded defenses on the ground. The Cowboys have three reliable guys in LG Marcus Keyes (37 starts), C Johnny Wilson (15 plus starts) and RT Tevin Jenkins (16 starts). Meanwhile, LT Dylan Galloway and RG Ry Schneider have some starting experience as well. What really makes me more optimistic is that Charlie Dickey (Former K-State OL Coach) is now in Stillwater coaching these guys up.

This group reminds me a little of the Iowa State offensive line. They have a ton of experience coming back (113 combined returning starts) but they have been very inconsistent. While they did a better job protecting their quarterback (I know Alan Bowman got hurt plenty), they really struggled opening holes in the run game. In fact, Texas Tech had the second worst rushing attack in the conference averaging just 132.6 yards per game. LT Terence Steele is a good player as a blind side protector and RG Jack Anderson is an All-Big 12 player as well, but something must click with this unit this season. I know Dawson Deaton had some struggles early on but hopefully he can get that cleaned up this year because he will be the full-time starter at center. If everything goes as planned for this line, they could be in the top three discussion but much like the Iowa State line, I just need to see more from these guys up front.

While there is PLENTY of experience on this offensive line (107 combined starts), the results of the offensive line over the last few seasons have been just, blah. Julian Good-Jones and Josh Knipfel are solid players but outside of those two, the others have been average at best up to this point. They were just ok in pass protection last season but what really concerned me was the inability to create running lanes for the backs last season. Sure, David Montgomery was a stud at running back during his time on campus, but he had to make a lot of cuts and break a lot of tackles to get where he was going. I have seen some people rank this unit as one of the best in the county along with the best in the conference, but I don’t have any logical idea on how that could be possible based off what this group has done so far. Again, plenty of experience here (And I could be proven wrong) but this group must take another step forward this season.

Scott Frantz, Tyler Mitchell and Adam Holtorf have a combined 93 starts under their belt which as awesome but losing RT Dalton Risner is a huge loss. Risner was the best offensive lineman in the conference and started a ton of games for the Wildcats over the years. His replacement? Nick Kaltmeyer who has just some game time experience. Also, the battle between Evan Curl and Josh Rivas for the left guard spot will be something to keep an eye on as well. I would say that the Wildcats have three solid guys but there is no question that the left guard and right tackle spots may be a weakness of this group. Also, Kansas State gave up way too many sacks last season and that will also be something that needs to be cleaned up this year. Much like West Virginia, this unit has the potential to be a top five group in the conference.

This line had me thinking very hard about how good they can be. Yes, there may be ranked eighth on this list, but they can very easily be a top five unit in the conference. LT Colton McKivitz may be the best left tackle in the Big 12 and RG Josh Sills is one of the best guards in the conference as well but around them are where the questions begin for me. While RT Kelby Wickline has plenty of game experience, he only has three starts as does C Chase Behrndt. Again, this group could be higher, but I had a hard time once I got in the middle of these rankings.

Perhaps no other offensive line had more growing pains last season than the Bears. Let’s face it, quarterback Charlie Brewer has been running for his life the past two seasons, but I will say that the run game is getting better. The Bears gave up 39 sacks last season which was dead last in the Big 12. I do like LG Xaiver Newman (11 starts) and RG Sam Tecklenburg (25 starts) but I am a little worried about their two starting tackles, Connor Galvin and Johncarlo Valentin. Again, I think this group can be pave the way for a top five rushing attack in the conference, but they could very easily be near the bottom in sacks given up if they don’t get that pass blocking improved.

While this may be the best Jayhawks offensive line in a while, there were still plenty of growing pains from last season. While Hakeem Adenji (36 Starts) and Andru Tovi (14 Starts) lead the way for this group, the rest of the unit still has some concerns. In fact, new Kansas offensive line coach Luke Meadows said that they may rotate so much to the point where they are rotating guys in and out mid series. I have never heard of something like that, but they are either confident in ten guys or have no idea who can play and who can’t. Soon, this question will be answered once the season kicks off.