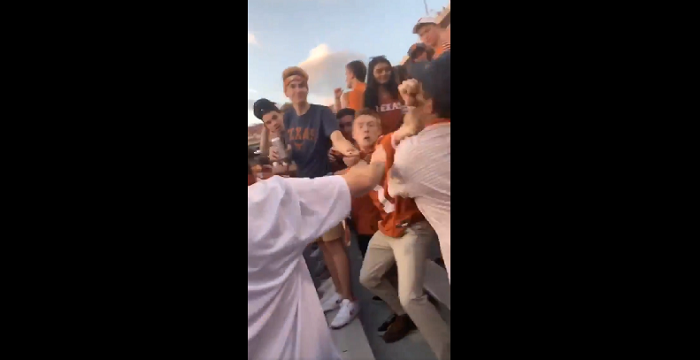 When you’re pounding your opponent 38-0 and on your way to a 45-14 win, sometimes fans, especially students, get bored. And that appears to be what happened in the Texas Longhorns student section on Saturday against Louisiana Tech. Check out the fight that broke out between a couple of bros on Saturday in Austin.

We got so bored beating LA Tech we had to start beating each other up pic.twitter.com/4AexaLerpL

My favorite, and most underrated, part of the video is in the first five seconds when the guy in the Texas No. 1 jersey starts falling backwards after getting punched, his buddy behind him sneakily saves the beer by taking it out of his hand. No idea if that beer was around for the poor sap once the fight came to an end, but hey, it was a good save regardless.

As for these fans, stop being clowns and let’s save that energy to make Darrell K. Royal Memorial Stadium as loud as humanly possible Saturday night against LSU. The Longhorns will need you at the top of your game, not at the bottom of the bleachers fighting… each other. Dopes.