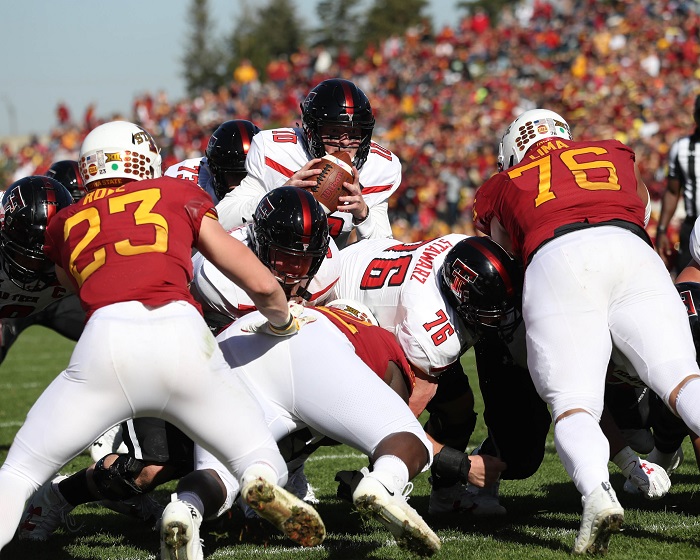 Welcome to the HCS Big 12 mailbag. This mailbag is for all you football junkies out there who root for a Big 12 school who not only have questions about your team, but other teams in the conference as well. So, join me, grab a cold brew or your favorite drink and relax as I answer all your Big 12 questions in my mailbag. For those interested, I will send out a tweet (@Derekduke25) every Monday at noon until last call (No, not 2 AM) at 8 PM CT for you to send in your questions to be answered every Tuesday right here at Heartland College Sports. However, since Labor Day was Monday, I decided for the mailbag to have a day off too.

I want to thank each one of you who submitted a question this week and for those reading, I am glad you could join me. I am doing this on Wednesday morning and of course this mailbag wouldn’t be nearly as fun without a cold beverage right next to me. But since it’s morning time, I thought a hot cup of coffee will do. Cheers!

@ALBtris asks: What new wrinkles do you expect to see for Texas against LSU this weekend?

Duke: Of course, the running back situation for Texas is fascinating for me. With Jordan Whittington out, the depth is thin because both Daniel Young and Kirk Johnson are still healing up from injuries, they suffered in fall camp. That only leaves Keaontay Ingram as the lone healthy running back. While Keaontay is a good player, you still need more than one guy at running back because he can’t run the ball every time and someone will need to come in a give him a rest every now and then. That leaves only quarterback turned running back, Roschon Johnson left at the position outside of David Gbenda who I don’t think will see the field. Johnson can do some damage with the football in his hands as he is an outstanding athlete but what happens if they need him in pass protection Saturday night? I am very curious to see what happens there. Due to all of this, I expect Sam to run the ball for at least 15 carriers against LSU. I know it is not ideal but with so many injuries at running back, it will be necessary if they want to beat LSU.

@LonghornFrenzy asks: The Cyclones looked ultra conservative in their first game and really struggled against an FCS school. In your opinion, have fans and media put some unrealistic expectations on them? It is hard to replace what they lost on offense.

Duke: I am not sure they will fully replace what they lost last season in RB David Montgomery and WR Hakeem Butler. Those were two first team All-Big 12 guys at their position and to come back the next season and replace that kind of production is difficult especially at a place like Iowa State. However, I think the running back situation overall is good considering they feel like they have a few guys at the position who they feel confident in. I am still all in on true freshman Breece Hall. But Sheldon Croney Jr. and Johnnie Lang also got carries too. At receiver, it was nice to see Deshaunte Jones have a good game as well as La’Michael Pettway the Arkansas Grad Transfer. They will need more of that. Again, they won’t replace the production, but they could be better depth wise at those two spots.

Now, as far as expectations go, it was a disappointing game, but I will say this. Offensive Coordinator Tom Manning didn’t call his “A” game this past weekend. They had no flow to the game and there were plenty of drives that stalled out and made me scratch my head a bit. They have a bye week before they host Iowa next weekend so let’s wait and see before we label this team.

@KBehr68 asks: What position group on each team are you most interested in seeing in the “Which team is actually back bowl” this weekend?

Duke: I don’t think I can fully answer that question right now due to the fact this it is still cupcake time for a lot of Big 12 teams this weekend. Last weekend there was only one power five matchup (Oklahoma State at Oregon State) and this weekend there will be only two power five matchups (LSU at Texas and WVU at Missouri). The rest of the conference will play teams like Bowling Green, UTSA, South Dakota, Coastal Carolina, McNeese State and UTEP. Outside of maybe Kansas, there won’t be much to learn about the other teams unless they just flat out crap the bed by not showing up at all.

Now for WVU, I want to see them run the football better which starts up front with their offensive line. I had their line ranked eighth in my Big 12 offensive line rankings and this past weekend, they looked more like they should have been ranked tenth. They rushed for only 34 yards on 24 carries against James Madison last weekend. That MUST change to take some pressure off QB Austin Kendall if they want to win on the road against Missouri. As for Texas, I want to see some better corner play. Outside of Jalen Green, I thought the Longhorns have yet to find a corner opposite of him that can play well. Against this new LSU spread offense, they better find someone to step up fast.

Duke: Alan Bowman is the best pure passer in the Big 12 no matter the range. This is an opinion answer but who else in this conference can throw for nearly 500 yards in a game? We have some great quarterbacks in this conference, but Alan Bowman has the best arm in the Big 12. In terms of just pure passing abilities, nobody does it better than Bowman.

@CalebCannon04 asks: What is Texas best and worst matchup against LSU?

Duke: The best matchup for Texas must be their defensive line going up against the LSU offensive line. While LSU returns plenty of experience from last season, they gave up a ton of sacks for a team that didn’t throw the ball a whole lot last year. Of course, Texas has plenty of guys to replace from last season up front but between Malcom Roach, Keondre Coburn and Ta’Quon Graham, I feel like they have a solid front to match up well against the Tigers offensive line.

On the flipside, it is the LSU wide outs versus the Texas corners. I mentioned this earlier but outside of Jalen Green, I don’t really feel that confident about them matching up against the new LSU spread attack when four wide outs are on the field.

At Least for Week One, the Big 12 is College Football’s King
Is Chris Klieman Basically a Modern-Day Bill Snyder?
To Top