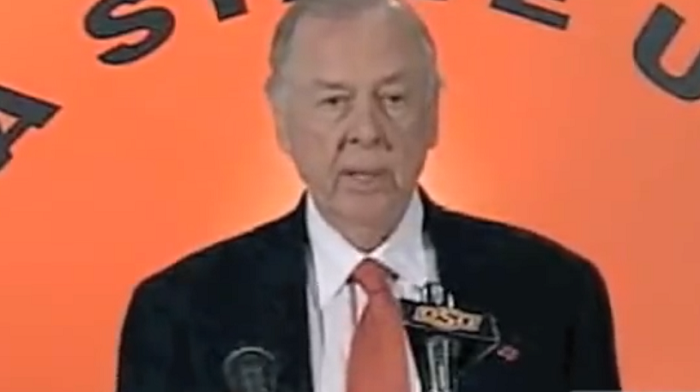 According to his spokesman, Jay Rosser, Pickens had been battling a series of strokes and head injuries following fall he took in 2017.

Pickens is largely credited with helping put Oklahoma State football back on the national map when in 2006 when he donated $165 million to the athletic program, the largest single gift in NCAA history. But that wasn’t it for T. Boone, who said he ended up donating over $650 million to the University during his lifetime.

A statement from Oklahoma State athletic director Mike Holder said, “The greatest Cowboy of them all has taken his last ride. It will never be the same again. We could never thank him enough for all that he did for our university. He gave us everything he had — and all that he asked in return was that we play by the rules and dream big. He was living proof that anything is possible if you’re wearing orange. ‘Great ride Cowboy, great ride!'”

Mr. Pickens is a big part of our success and we’re all thankful for the lasting impact he’s had on Oklahoma State. It would have been difficult for us to climb as high as we have without him. He’ll be missed, but his legacy here will live on for a long time to come. pic.twitter.com/1jYVwBcHo0

The combination of Pickens and Gundy proved to be exactly the recipe Oklahoma State football needed. Even though the two famously butted heads, they proved to be an impressive duo. Before Pickens’ donation, the Cowboys had reached double-digit wins only three times in their history. Since, they’ve won 10 or more games in six seasons, including nearly making the National Championship game in 2011.

“He was the ultimate Cowboy,” Oklahoma State University president Burns Hargis said in a statement. “It is impossible to calculate his full impact on Oklahoma State. His historic gifts to academics and athletics not only transformed the university, they inspired thousands of others to join in the transformation.”

Pickens graduated from Oklahoma State in 1951 with a degree in geology when the university was still called Oklahoma A&M. He would go on to be known in business for his work in the world of oil and gas, where he started and sold companies and became a self-made billionaire.