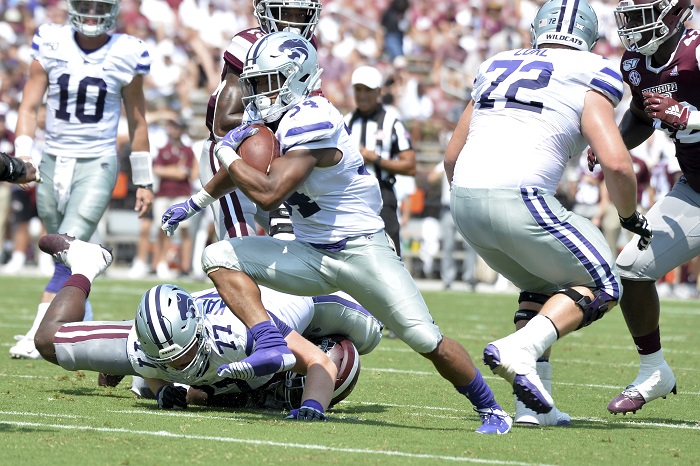 It was a hot one in Starkville, Mississippi this afternoon as temperatures were around 100 degrees (although the ESPN sideline reporter held up a thermometer that read 95 degrees, but that’s another story for another time). As for the play on the field, Kansas State looked like the “SEC” team in the Home of Cowbells. The Wildcats jumped out to an early 10-0 lead over the Bulldogs thanks to a Jordon Brown touchdown run and a 35-yard field goal by Blake Lynch.

Then things got interesting for Kansas State, and not in a good way, as they started to make some uncharacteristic mistakes. It started when the Wildcats were up 10-0 as Jordon Brown was fielding a punt near midfield and winded up fumbling the football. Mississippi State took advantage of the field position by stringing together a nine-play drive for a touchdown to pull within three.

Finally, the turnover Gods helped the Wildcats as Mississippi State Quarterback Tommy Stevens fumbled the football to give Kansas State great field position and it resulted in a Skylar Thompson sneak into the end zone. However, the Bulldogs would answer right back in just four plays and thirty-seven seconds later as Kansas State went into the break with a 17-14 lead.

The bad breaks continued for Kansas State in the second half as defensive back AJ Parker intercepted a Tommy Stevens pass deep in Mississippi State territory, but coughed it back up on the return. That mistake proved to be costly as the Bulldogs made the Wildcats pay for it by once again marching down the field to score. Of course, the bad luck continued as Kansas State’s Seth Porter fumbled a punt to give the Bulldogs another scoring opportunity to put three more on the board and suddenly, Mississippi State was up 24-17.

Finally, the mistakes stopped for Kansas State and within seconds, the Wildcats tied the game up at 24 thanks to a 101-yard kickoff return for a touchdown by Malik Knowles. The two teams traded punts and with 5:37 left to play, the Wildcats took the lead as quarterback Skylar Thompson found wide out Dalton Schoen for a 15-yard touchdown strike to go up 31-24. After that, the Kansas State defense buckled down and took care of business as the clock hit zero in Starkville.

Overall, Kansas State made plenty of correctable mistakes and luckily for head coach Chris Klieman, his team overcame those mistakes and got the victory on the road in “SEC” country. Take that Paul Finebaum.

Also, I want to mention that even though Kansas State made mistakes in this game, perhaps no mistake was bigger than what current Kanas City Chiefs defensive tackle and Mississippi State alum Chris Jones had to say about the game a couple of days ago. In a small media session, Jones said “You know the SEC is the best conference in football, right? Say it for me one time, SEC! SEC! SEC!  You know K-State is coming to the SEC to the dog pound. Cowbells ringing and the cows are mooing. It’s about to get real because I will pray for you Kansas State. It’s going to be loud and viscous. One thing Mississippi State is good at is that they have pass rushers who affect the quarterback and with Kansas State coming in, I will pray for them.” After the game, Kansas State quarterback Skylar Thompson went on Twitter and said, “Appreciate the prayers.” Well played Skylar, well played.

Now Kansas State moves on to 3-0 for the first time since the 2015 season and will face Oklahoma State on the road in Stillwater.