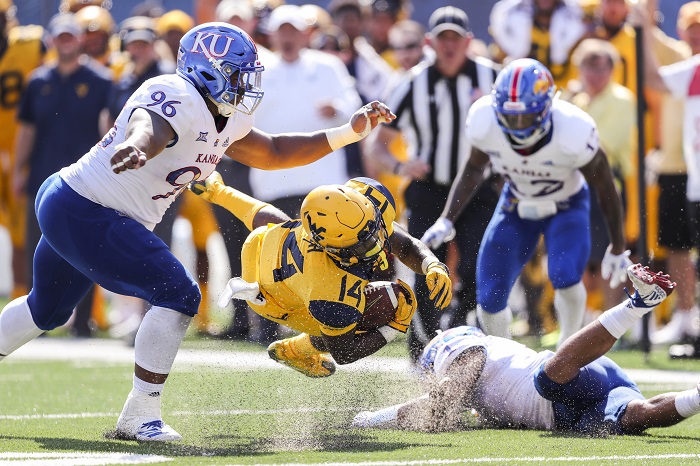 Here is everything you need to know about the upcoming Big 12 game in our Kansas vs. West Virginia preview and prediction.

Fun Fact: Since West Virginia joined the Big 12 in 2012, the Jayhawks and the Mountaineers have only met one other time in their Big 12 opener, in which West Virginia defeated Kansas, 56-34, during the 2017 season at David Booth Kansas Memorial Stadium. The teams have met eight times in the series history, with West Virginia leading the series with an 7-1 record.

Kendall started to look comfortable last week against NC State. Remember he’s playing in his first real action since high school in the Carolinas a few years ago. The offensive line gave him time and he had himself a great game against NC State, finishing 27/40 for 272 yards with three touchdowns and one interception. This will be his first Big 12 road start and while it’s not the toughest place to play, it’s still a first. Kendall will need to settle in and get it going early to try and get the Jayhawks on their heels.

In his first season with the Jayhawks, the junior wide receiver has more than 100 receiving yards in two games, with a total of 29 catches for 235 yards and two touchdowns in the early season. Both TDs came last week against Boston College. Through three games his two 100-yard games is something a wide receiver didn’t do at KU for the entire 2018 season. Parchment has done a nice job finding a connection with Carter Stanley in the early season after coming over from Iowa Central CC where he was a three-star prospect.

Kamara is off to a hot start for the Jayhawks after playing in 12 games last season in as a role player. He has ten tackles on the season, but more importantly is getting behind the line of scrimmage, with 3 tackles for loss and 2.5 sacks, with .5 TFL and .5 sack last week in the team’s comeback win over Boston College. West Virginia’s offensive line looked improved last week, but Kamara will try to wreck some havoc again in the backfield.

The Jayhawks need to continue to own the red zone on the defensive side of the ball. KU is holding opponents to just six scores in 12 trips to the red zone through the first three games, ranking at the top of the Big 12 Conference and tied for fourth in the FBS. The Jayhawks have held opponents to two rushing and three passing touchdowns in the red zone so far this season, while forcing one turnover. The Jayhawks are just one of nine programs to hold their opponents to 50 percent or under scoring while in the red zone. Meanwhile, the Mountaineers have the second-worst red zone offense in the Big 12 so far, ranking only ahead of Texas. KU will need a couple of these key stops or turnovers to pull off the upset.

The Mountaineers started to click as last week’s game went on against the Wolfpack and I expect that to continue against KU this week. Sure the Jayhawks should be feeling good about themselves after beating Boston College last Friday night, but now it’s time for conference play and the Mountaineers bring in the better quarterback and better defensive line, which will prove to be the difference in this game.