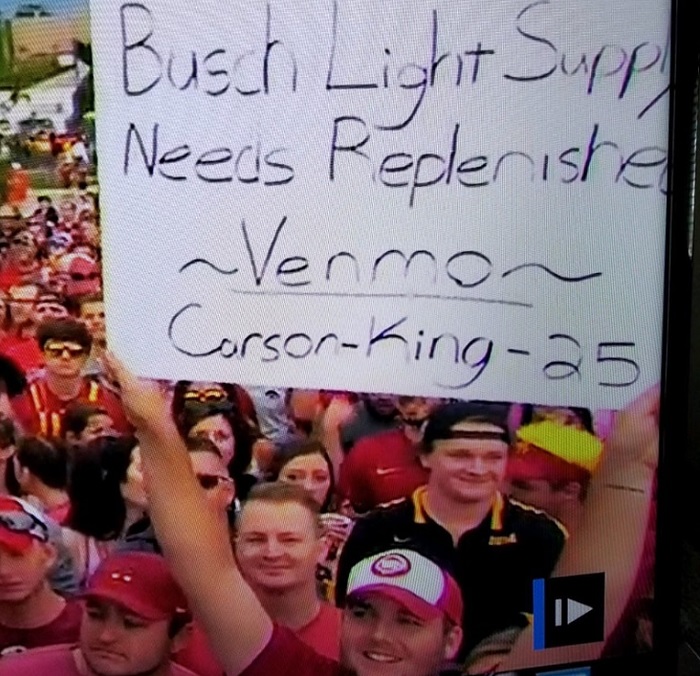 The state of Iowa went from a great moment to a moment of pure embarrassment in the span of a few days. Carson King is the Iowa State fan who has raised over $1 million for the University of Iowa Stead Family Children’s Hospital thanks to a sign he held up at College GameDay two weeks ago that went viral.

Since then, he’s gotten national attention for his good cause and has undoubtedly changed the lives of thousands of current and future children who are suffering.

But for some reporters, that wasn’t good enough. King apparently made some offensive posts on Twitter when he was 16 years old and a reporter from the Des Moines Register dug it up and it wound up going viral.

King held a press conference Tuesday to discuss a controversial post. He said a reporter with the Des Moines Register called attention to an offensive social media post he made when he was 16 years old. King said, “Eight years ago, when I was a sophomore in high school, I made some social media posts with my friends that quoted and referenced the show ‘Tosh.0′. One of those posts was brought to my attention by a member of the media today.”

The Des Moines Register responded to the controversy with the following statement.

A statement from our editor: pic.twitter.com/ZH9AhcrYbg

The paper goes on to say that because they included it at the bottom of the story, it means they didn’t put a whole lot of emphasis on it since it was several years ago.

Is the Des Moines Register living the same world as the rest of us? It’s 2019. We live in overly-PC America where everyone is looking to drag someone else down for something inappropriate they may have said years prior. The Des Moines Register knew that the old tweets would get massive attention from a sports media that aggregates on a daily basis simply looking for clicks from folks who are perpetually outraged. That’s exactly what this accomplished.

How might a handful of tweets from when someone was 16 in which they reference a TV show play into your “profile” of who Carson King is? It’s one of the worst editorial decisions I’ve ever seen and the Des Moines Register has the audacity to hide behind some type of “journalistic integrity”.

This has caused Busch Light to pull any associating with King and his efforts with the Children’s Hospital. Frankly, Busch Light is making a mistake too and succumbing to outside pressure. They have an easy out here. “We don’t support Carson King’s tweets from high school, but we most certainly support his cause on this issue.” Easy.

We’ve seen this same story play out with MLB players. We saw it happen to Villanova star Donte DiVincenzo the night he won the National Championship in 2018. DiVincenzo was suppose to be having the night of his life, instead a USA Today reporter asked him about a tweet from when he was a kid in which he quoted a rap song.

Also note the headline from USA Today: “An offensive tweet from 2011… surfaces.” No, nothing surfaced. It was dug for a found. Who spends enough time scrolling through 7-8 year old tweets looking for a “gotcha” moment? It’s just like in Carson King’s case. No one goes that deep into someone’s Twitter unless they’re looking for exactly what they found.

It’s pathetic. It’s embarrassing. And it continues to show what a mockery “journalism” has become.

Iowa President on Cy-Hawk: ‘I’m not convinced at all that we should play this game again’
Baylor vs. Iowa State: Preview and Prediction
To Top