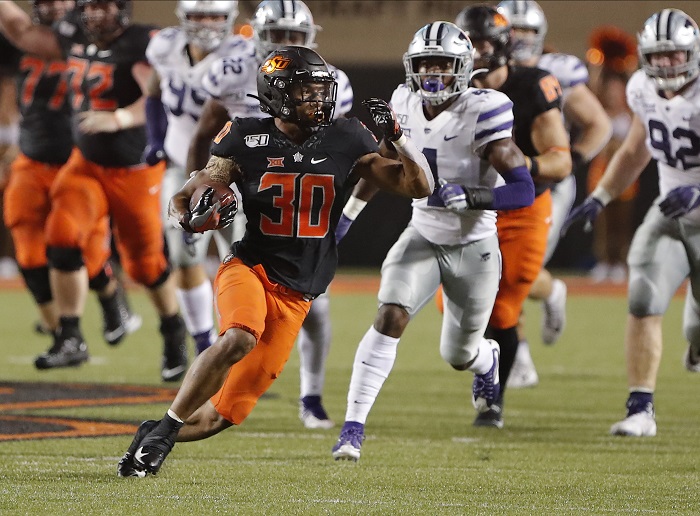 Coming into the game, it was Kansas State with the dominant running game through the first three games of the season, averaging 280 rushing yards per contest. Once the game came to an end, the Oklahoma State running game, notably Chuba Hubbard, was the one getting all of the attention.

It was a weird game in Stillwater on Saturday night. First off, the game was on ESPN+, causing plenty of frustration amongst fans of both teams. Then there was a weather delay, which halted the game for more than an hour due to lightning. But in the end, it was Chuba Hubbard’s 296 rushing yards that led the Oklahoma State Cowboys to a comfortable 26-13 win over the Wildcats at Boone Pickens Stadium.

Hubbard finished the night with rushes of 53, 84 and 44 yards, while Spencer Sanders added 153 passing yards and a touchdown for Oklahoma State.

The Pokes never trailed in this one. It took both teams a while to get going, but the Cowboys struck twice in a two-minute span late in the first quarter. A field goal was followed by a K-State fumble, which was capped off by a three-yard touchdown pass from Sanders to Logan Carter. It gave Oklahoma State a 10-0 lead the Cowboys never looked back from.

Kansas State’s offense was held in check throughout the night. The Wildcats had less than half of their season average on the ground with a mediocre 126 rushing yards, averaging 3.9 yard per carry. But those numbers are generous when you put them into perspective. K-State had a meager 18 yards on 13 carries at halftime and just 68 yards as of late in the third quarter. And as a result, quarterback Skylar Thompson never got the passing game going, finishing 11/23 for 118 yards.

For Oklahoma State, the only critique would be its red zone execution on offense, which leaves plenty to be desired. Last week vs. Texas, Oklahoma State suffered with a pair of turnovers and a turnover-on-downs inside the Longhorns’ 20-yard line. This week the Pokes had to settle for three field goals making this game appear even closer than it really was. Oklahoma State’s second and final touchdown came in the third quarter when Chuba Hubbard ripped off an 84-yard run to put the Pokes up 23-3.

Oklahoma State bounced back with its first Big 12 win of the season following last week’s loss to Texas. The Pokes hit the road next week to take on Texas Tech, who is coming off a brutal loss at Oklahoma. Meanwhile, the Wildcats head back home to face Baylor, who is coming off a thrilling victory vs. Iowa State.

Baylor Holds on for Wild Victory vs. Iowa State
Big 12 Football’s Week 5: The Good, the Bad and the Ugly
To Top