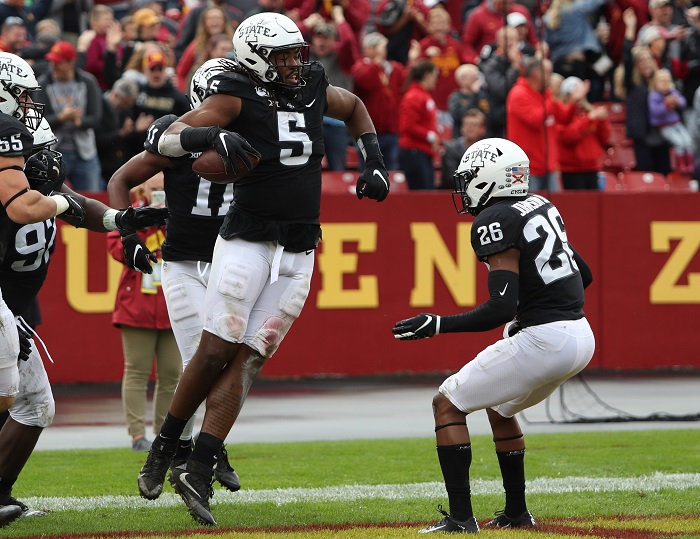 As the calendar turns, Matt Campbell’s teams turn it on and that trend seems to be continuing in 2019. The Cyclones are now 8-0 the past three seasons in the month of October. Sans the Louisiana-Monroe game, Iowa State played, by far, its most complete game of the season in a 49-24 win over TCU on Saturday in Ames.

It was a game that was postponed by two hours due to heavy rain, lightning and thunder that hammered Ames throughout the morning and early afternoon.

Once the game eventually began, Iowa State got on the board right away with a seven-play, 81-yard drive, ending with Brock Purdy finding Chase Allen for a one-yard touchdown pass. TCU knocked through a field goal later in the first quarter, but the game turned in the second when Max Duggan was sacked by O’Rien Vance, fumbled and it was recovered by Eyioma Uwazurike for a touchdown. A 14-3 Iowa State lead turned into a 21-3 lead late in the half when Charlie Kolar’s 25-yard touchdown catch capped off a six-play, 58-yard drive.

The teams did combine for six combined touchdowns over seven drives, but the closest TCU ever came was 35-24 at the 9:01 mark of the fourth quarter. However, the Cyclones responded right away with a five-play, 75-yard drive that took 2:43 and ended with a nine-yard touchdown run by Brock Purdy to put Iowa State up 42-24. Campbell admitted the importance of that drive after the win, saying, “When the game got awkward there in the fourth quarter, our guys made a play when we needed to make a play.”

Iowa State added one more late score to cap off the 49-24 victory. Purdy finished 19 of 24 for 247 yards with two touchdown passes, along with 102 rushing yards and two rushing scores on 12 carries.

The Cyclones improved to 3-2 overall and 1-1 in Big 12 play and the Horned Frogs fell to 3-2 and 1-1 in conference play. TCU is off next week before traveling to Kansas State in two weeks, while Iowa State goes to West Virginia next week for a 3:00 p.m. CST kick off.

During his postgame press conference, Campbell added, “I love this team. Best group of kids I’ve ever coached.” The Cyclones have been close this season, losing two games by a combined three points, and it was clear Campbell feels his team is starting to put it together. And what a coincidence, it just happens to be October.