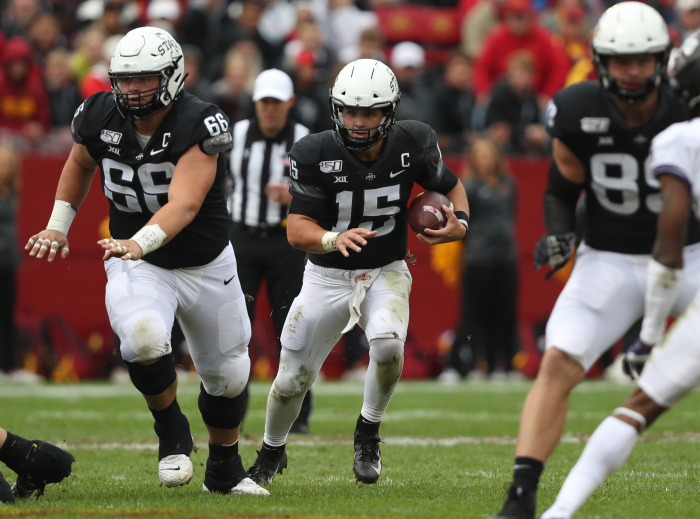 Here is everything you need to know about the upcoming Big 12 game in our West Virginia vs. Iowa State preview and prediction.

West Virginia Fun Fact: Last time West Virginia lost back to back home games? You would have to go back to the 2014 season.

Iowa State Fun Fact: Since 2017, Iowa State is undefeated in the month of October.

I checked the calendar, and yes, it is officially Brocktober. Purdy has had one heck of a season so far completing 70% of his passes and has thrown for ten touchdowns on just two picks. Not to mention, Brock already has five rushing touchdowns so far this season which in the 2018 season, he had five all season long. With the run game being a work in progress still, this has left Brock Purdy not only to make plays with his arm, but with his legs as well.

Last weekend, Texas NT Keondre Coburn had a solid game against this West Virginia offensive line. Coburn is a heck of a player in his own right but if the Mountaineers had issues blocking Coburn, then just wait until they must face a monster like Ray Lima in the middle. Lima isn’t a guy who lights up the stat sheets, but he can be disruptive force all game long.

There are times where Austin has shown some flashes and he is completing 65% of his passes this season. However, he has already thrown seven interceptions this season. He must make better decisions and you can certainly make an argument that his two picks in the fourth quarter against Texas last weekend costs his team the ball game. Not to mention, he threw four interceptions in total last weekend. If West Virginia is to win this game, Austin can not make mistakes like that.

Josh leads his team in tackles so far this season. He has a nose for the football like few others have on his team. While the Mountaineers offense has been the hot topic of conversation (good or bad), I feel like nobody is really talking much about this defense. Josh will be a busy man on Saturday whether it’s chasing Brock Purdy or one of the many Iowa State backs running the football.

Offensively, Iowa State is going to try and run the football and control this game on the ground. The Cyclones appear to have found their lead back in Johnnie Lang and with the help of quarterback Brock Purdy, I expect this offense to really test out this West Virginia rushing defense that has been lackluster so far this season giving up over 181 yards on the ground. Defensively, Iowa State has struggled a little bit at corner so it will be an interesting matchup against West Virginia wide outs T.J. Simmons and Sam James.

The most important thing for West Virginia is to take care of the football. There is no doubt that turnovers are always costly, but it seems like quarterback Austin Kendall has made too many mistakes in crunch time or when the game is still close. Get the football to your playmakers on the outside and try and get into a shootout with the Cyclones at home. Defensively, the Mountaineers will get tested on the ground and they must make sure they stop the Cyclones run game or this one is going to be an uphill climb.

Because of it being in Morgantown, I think the Mountaineers keep it close. But what concerns me about West Virginia is their lack of a run game which is by far dead last in the Big 12 as they average just 105 rushing yards per game. That will put more pressure on Austin Kendall to make plays and against this Iowa State defense and that talented defensive line, I am not sure if he can make enough plays to win this game. As for Iowa State, I think they will have some success in the running game after surprisingly doing a great job against a stout TCU defense last weekend. There are two things that travel well with teams on the road, a good defense and a run game. It appears that Iowa State has both of those things now.