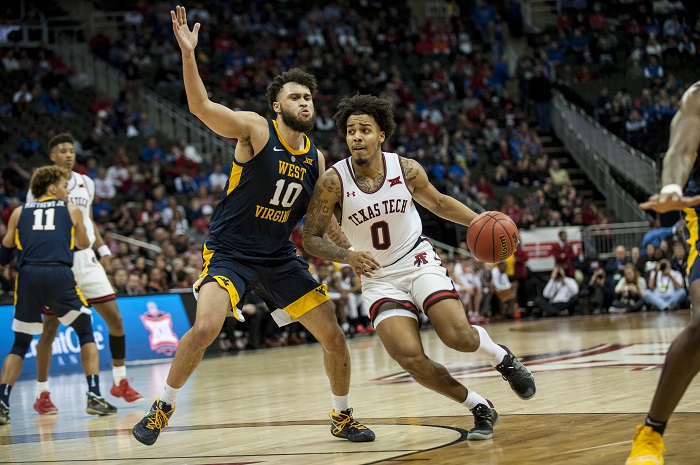 There are many great players in the Big 12 entering this basketball season. Some of them were on rosters last year but didn’t get their chance to shine. Today we look at a player from each team that you may not know about that has a chance to become a big part of their team’s plans in 2019-20. The requirement is that the player has to have been a part of the team’s roster last season.

At Big 12 Media Day last year I mentioned Thamba to Baylor head coach Scott Drew and he was impressed that I even knew who Thamba was. Thamba has one of the best wingspans in the entire conference (7-foot-5) but it didn’t translate last season, as he averaged 1.8 points and 2.2 rebounds per game. The list of returning players for Baylor is a crowded one, but Thamba has something that no other Baylor player has — length. Now, can Thamba apply it in a way that can make an impact for the Bears? If he can, he changes their frontcourt rotation and their ability to block shots.

This was a tough choice between Conditt and another centerpiece of head coach Steve Prohm’s 2018 class, Zion Griffin. But with only Michael Jacobson and Solomon Young returning inside, the opportunity exists for Conditt to make a serious impact for the Cyclones as a swing power forward or center. He only averaged 2.0 points, 1.7 rebounds and 1.0 blocks per game last season. But he had his moments late in the year and it’s hard to discount the fact that he had a double-double his senior year of high school. Just a sophomore, the possibility exists for him to be a real contributor this season.

You will hear his name a lot this season and not just because of what happens on the floor. De Sousa’s mere presence on the roster is controversial, given that his recruitment is part of the NCAA’s current probe into Kansas basketball. Now, he’s been reinstated to play for KU this season after missing all of last season. But, in 2017-18 he averaged 4.0 points and 3.7 rebounds. He’s a backup for right now behind Udoka Azubuike and David McCormack. But he’s going to play and he has the chance to significantly improve his numbers and help Kansas’ frontcourt issues going into the season.

There are several players on K-State’s roster that need to take a leap in 2019-20, but Stockard is the one the Wildcats really need to emerge because he can fill the power forward role vacated by Dean Wade. Stockard didn’t get much chance to shine last year as a sophomore, scoring 1.8 points and grabbing 1.5 rebounds per game. But the opening exists for Stockard to improve on his 7.8 minutes per game off the bench, emerge as a starter and take a significant leap in his career as a junior.

The Sooners would love to have his length off the bench, especially if he can put up the numbers he did at Salt Lake (UT) Community College — 10.8 points, 7.2 rebounds and 3.3 blocks per game. He was a medical redshirt last season. If Kuath could give the Sooners 10-15 minutes off the bench each game and give them some shot-blocking and rebounding that would be a bonus for OU.

Remember when the Cowboys had to have tryouts in January to fill out their roster? Mitchell was one of the guys that made the team and he’s one of the survivors entering this season. He played just 24 minutes last year, but he hit a big 3-pointer against Texas Tech in Big 12 play that sent that game to overtime. Will Mitchell play much next season? It’s hard to say. But he offers depth and knowledge of Mike Boynton Jr.’s system, and that could mean something as the Cowboys bring on a lot of new pieces this season.

Barlow barely played last year, notching just 2 points on the entire season. TCU wanted to redshirt him but depth issues forced the Horned Frogs to activate him during league action. As the No. 36 center in the nation entering his freshman season, the Horned Frogs need him to serve as Kevin Samuel’s primary backup and provide 12-15 minutes per game, along with solid scoring and quality rebounding. He averaged 9.7 points, 6.3 rebounds and 1.4 blocks per game during his senior year at Bishop Lynch (Dallas, TX).

Texas has plenty of potential this season, including great talent on the perimeter. But a player like Liddell could come in handy on the wing. A Top 50 recruit entering last season, Liddell averaged 16.5 points, 8.7 rebounds and 1.5 blocks per game as a senior. He didn’t play a bit last year, but expect the Longhorns to give Liddell every chance to carve out a place in the rotation entering this season.

This probably seems like an odd selection, given that Edwards logged serious minutes in the NCAA Tournament and finished the season with 5.5 points, 2.2 rebounds and 1.1 assists per game. In fact, he scored 12 points in the national title game against Virginia. But that’s also a great reason to highlight him here. Given the extraordinary amount of turnover in Lubbock, the Red Raiders need Edwards to take a significant step in 2019-20. If he’s able to become a double-digit scorer for Texas Tech, the Red Raiders stand a real good chance of defending their Big 12 regular-season crown.

The numbers last season don’t say much — 5.4 points and 3.1 rebounds per game. But given the chance to play as a freshman late last season, Matthews delivered, and that included a season-high 28 points and eight rebounds against Texas Tech in the Big 12 Tournament, a game West Virginia won. He also notched double-digit scoring in all of WVU’s Collegiate Basketball Invitational games. The Mountaineers have a ton of returning young talent going into this season, along with some great newcomers. But Matthew is intriguing with his length, his shooting efficiency and his ability to score. If he doubles his output the Mountaineers take a significant leap.