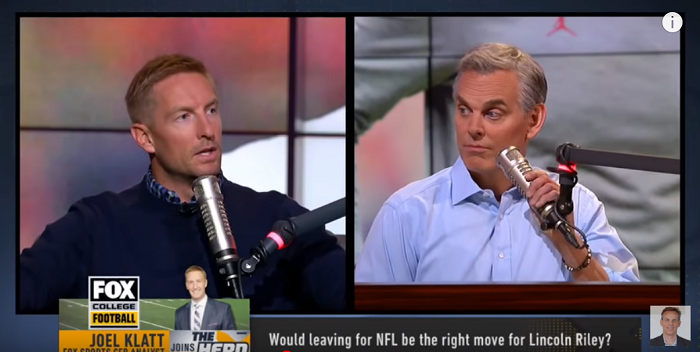 A lively conversation broke out on Colin Cowherd’s The Herd on Fox Sports 1 on Wednesday when FOX’s lead college football analyst Joel Klatt joined Cowherd for an extensive interview discussing the possibility of Lincoln Riley being the next head coach of the Dallas Cowboys.

Cowherd made the argument that Riley has a chance to have arguably the best head coaching job in sports for an iconic franchise, while also arguing that the college game is no longer a significantly easier lifestyle compared to being an NFL head coach, due to things like the early signing period and the transfer portal, therefore he might as well give the NFL a shot.

Klatt argued the size of the buyout involved with Riley at OU (which honestly would not deter Jerry Jones), but mostly pointing out that college coaches who are successful don’t always find that same success in the NFL, i.e. Chip Kelly. He pointed to Riley’s young family having strong roots in Norman, Oklahoma, and the appeal of basically being the coach and GM at OU, while still wanting to accomplish goals like a National Championship.

Klatt said, “Let’s say it doesn’t work out… what job are you going to go back and get.” Cowherd responded, “You’ve got $100 million. Who cares?!”

Cowherd went on to say, “Hey Lincoln. You want to stay at a Days Inn in El Paso another 38 times in your life or stay at a Ritz Carlton with Jerry Jones, have martinis on Saturday night?!”

Klatt’s comeback was to point out, “Now you’re in the draft room and you’re like, ‘Hey I really like this player.’ And now you’ve got to deal with Stephen [Jones] and Jerry [Jones] and all these yahoos.”

Assuming the Oklahoma Sooners continue to have the success they’ve had this season, this conversation is only going to continue, especially if the Dallas Cowboys continue to have some issues and Jason Garrett’s season keeps warming up.

The entire back and forth between Cowherd and Klatt can be seen here.