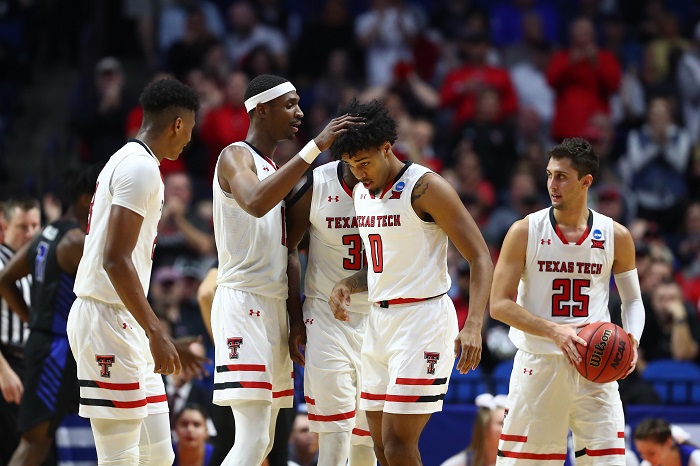 Today we start our Top 25, beginning with Nos. 21-25 as we run up to heading to Kansas City for Big 12 Media Day at the Sprint Center. At some point during the five days these stories run, you’re going to hate me. That’s cool. That’s part of the job. Hit me up on Twitter at @PostinsPostcard if you agree or disagree. Or both. I’m happy to reply when I can.

First, any player considered must have played in the Big 12 last season. So, if you’re looking for our Freshman, Transfer or Rising Player stories, we ran those earlier this offseason. They won’t be included here.

As a freshman, Edwards had a bench role on a deep Texas Tech team that made a run to the national championship game last season. He still managed to carve out about 18 minutes per game in that rotation. With that came 5.5 points, 2.2 rebounds and 1.1 assists per game, with 41 percent shooting (44.9 percent from the arc) and 66 percent from the free throw line. Had Edwards qualified, he would have been No. 2 in 3-point shooting in the Big 12 behind teammate Davide Moretti and just ahead of Oklahoma State’s Lindy Waters III. He bought into being a good perimeter defender, a demand in Chris Beard’s system. He also contributed in the NCAA run, averaging 8.7 points, 3.3 rebounds and 5-for-8 from the 3-point line in the final three games of that run, including a 12-point game in the National Championship game. That ended up being his fifth game of last season with 10 or more points.

Entering this season: Edwards will be looking for playing time in a crowded guard rotation featuring talented freshmen and transfers.

Haley sat out a year before taking the floor last season for the Mountaineers and started two-thirds of last season’s games, averaging 7.1 points and 4.1 rebounds per game. His game picked up steam as the season went on, as he was one of the few Mountaineers to shoot better than 50 percent from the floor, including nearly 60 percent from inside the arc. His 2.4 assists and 1.2 steals per game showed his ability beyond offense. And his numbers ticked up during Big 12 games, as his 54.5 percent shooting was fourth-best in the league, his 3.1 assists per game was No. 14 and his assist-to-turnover ratio was No. 11. On the floor Haley was versatile enough to bring the ball up and run the offense, play off-guard and even play small forward in a pinch. The only real deficiency in his game was his sub-30 percent 3-point shooting.

Entering this season: Haley should be one of the leaders for a highly-talented, but young, Mountaineers team.

As a true freshman last year, Samuel was one of the few true, back-to-your-basket centers in the Big 12. He logged 24.5 minutes per game and started every game for the Horned Frogs. He averaged 7.4 points and 6.9 rebounds per game and led the team with 77 blocked shots (the 2.1 average was fourth-best in the Big 12). He sported one of the best field-goal percentages in the Big 12 (66.5 percent, second behind on Texas’ Jaxson Hayes). Samuel also has four double-doubles for the season. Two things kept him lower on this list. First, his free-throw shooting (43.8 percent). Second, a significant scoring slump during Big 12 play.

Entering this season: Coming into the season Samuel figures to be the Horned Frogs’ No. 2 overall returning player.

Febres improved quite a bit from his freshman season to his sophomore season, as his scoring average (8.9 points per game) went up by more than five points per game, his minutes per game (27.1) went up by 12 minutes and his field-goal shooting (49.0 percent) went up by 17 percent. He ended up being one of Texas’ most improved players and his 3-point shooting (39 percent for the season) rescued the Longhorns at times throughout the season. By season’s end he was tied for second in the Big 12 for 3-pointers made per game and he was one four players in the Big 12 to make at least eight 3-pointers in a game last season (against Iowa State). In the Longhorns’ final 11 games — including the NIT title run — Febres improved to nearly 12 points per game, including a 17-point game against Lipscomb in the title contest.

Entering this season: Febres is a key part of the Texas’ considerable guard rotation.

Likekele had to start from Day 1 in Stillwater and he struggled during non-conference play with the pace of Big 12 play. But as league play continued he grew into one of the league’s better point guards. His 8.7 points, 4.8 rebounds and 3.9 assists per game made him the Cowboys’ fourth-best player. But he carried considerable weight on OSU’s stat sheet. He was among the Top 15 in the Big 12 in field-goal percentage all season, Top 12 in steals (1.2 per game) and Top 7 in assist-to-turnover ratio (1.7). His 3.9 assists means he’s the top returning passer in the Big 12. He was also among the Top 15 defensive rebounders in the Big 12 last season. By season’s end Likekele had emerged as a complete guard.

Entering this season: Likekele is looking to improve his 3-point percentage (just 24 percent) to complement the top-tier shooting of Lindy Waters III and Thomas Dziagwa, along with continuing to run OSU’s offense.