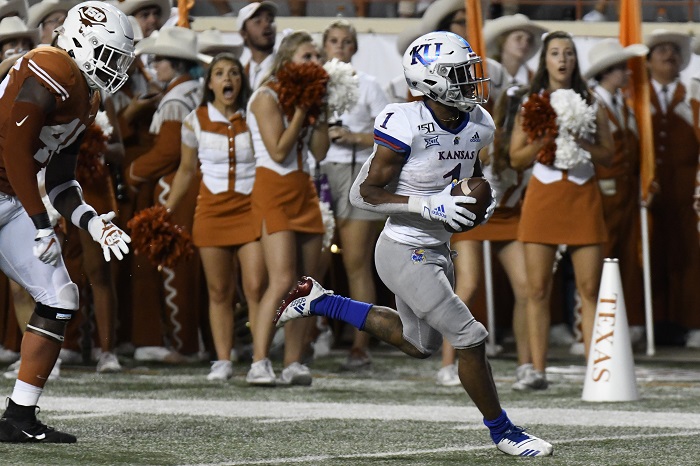 It’s time to name our Big 12 Players of the Week as we look at the top performances on offense, defense and special teams. Yes, there are always several players to debate, but we try to make this as fair as we can, while backing up our decision with stats and facts.

Pooka Williams was unable to help the Jayhawks pull off the upset over the Texas Longhorns, but it sure wasn’t his fault. Williams had a season-best 190 rushing yards on 25 carries, good for 7.6 ypc, along with two touchdowns. He also caught four passes for 25 yards. It’s been an inconsistent season for Williams, but if he can catch fire like this under new offensive coordinator Brent Dearmon, then maybe this KU offensive will actually come to life with one of the most talented players in the conference.

This was a huge test for the Baylor defense going on the road against Oklahoma State as an undefeated team on Homecoming Weekend in Stillwater. Oh, and they lost their defensive leader, linebacker Clay Johnston. Well Terrel Bernard helped step up at the position with a career-high nine tackles and he had the fumble recovery for a touchdown that essentially sealed the win for Baylor in the fourth quarter. The sophomore from La Porte, Texas is seemingly becoming more and more of a factor for Matt Rhule’s defense each week.

Roach spent the first half of this game on the bench due to the fact that he was ejected from the OU game last week for targeting. But once he came back in the game he made his presence felt. He helped slow down KU RB Pooka Williams, but more importantly, and the reason he wins this award, is because he blocked a Kansas PAT that the Longhorns returned for two points. This gave Texas a 33-30 lead in the fourth quarter. The two-point swing turned out to be huge as Texas ended up hanging on for dear life against Kansas by… you guessed it, two points.