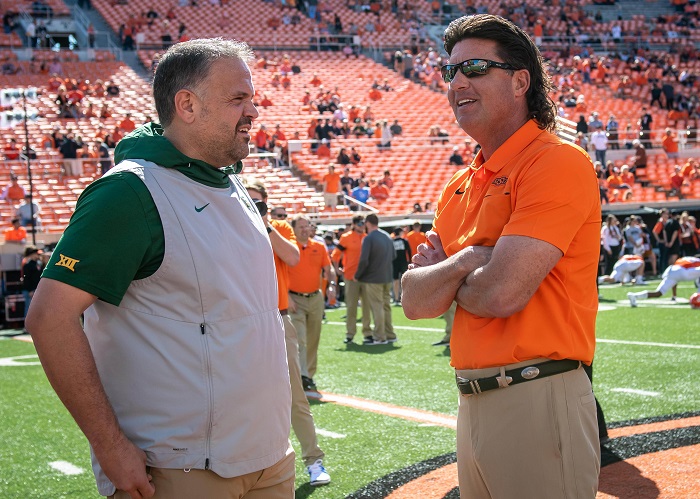 Ah yes, it’s that time of year when the Big 12 Football Power Rankings return to Heartland College Sports. A reminder that these can flux drastically from week to week. These are not supposed to be a mirror image of that week’s standings. It’s based on the previous week’s performance and the opponent when compared to the rest of the conference. So with Week 7 in the books, let’s get into this week’s Big 12 Power Rankings.

It’s OU’s conference. We say it every week, but it’s true. The Sooners did not suffer a hangover against West Virginia this week, blasting the Mountaineers in front of the home crowd in Norman. Alex Grinch continues to give this fan base reason to believe its defense is starting to turn the corner and play CFB Playoff-worthy ball. If that happens, when combined with Lincoln Riley’s ridiculously-efficient offense, watch out Bama, Clemson, LSU, etc.

The Bears picked up arguably the best win of the weekend, going on the road and beating Oklahoma State on Homecoming Weekend. Baylor did it with its offense, defense and special teams. That is what makes this version of Baylor different from the Art Briles’ days, it’s not all about the offense. It’s refreshing. With the win, Baylor jumped Texas in the Top 25 rankings and remains solidly in our No. 2 spot this week.

Iowa State is another team in the Big 12 catching fire and moving up our rankings after beating Texas Tech in Lubbock in convincing manner on Saturday. Brocktober continues as the Cyclones are 10-0 in the month dating back to 2017. The Cyclones’ defense remains steady and the offense has found a new lethal weapon in Breece Hall, a true freshman running back who had over 250 total yards of offense on Saturday. He’s changed the offense and Iowa State is now humming along, hoping to still achieve its goals of a Big 12 Championship.

What more can you say? Texas falls a spot after nearly blowing a home game against the Jayhawks. At least Charlie Strong lost to KU on the road. This would’ve been a disaster for Tom Herman and the entire Big 12, but kudos to the Jayhawks who played their tails off. Texas is banged up, but the talent level with KU isn’t even close. Herman will take the win and move on, but we can’t reward Texas for this performance on Saturday.

Texas Tech lost its game to Iowa State, but it remains (barely) in the No. 5 spot this week. The Red Raiders have lost two games in a row, but they’re against the No. 2 and No. 3 teams in our Power Rankings. Tech continues to show a lot of fight and grit, despite the fact that they’re down their starting QB, who is a top-half signal caller in the conference. Matt Wells deserves credit for that as this team won’t be an easy out for any Big 12 team the rest of the way.

The Wildcats were coming off a bye week and showed some nice offensive life in a win over TCU this weekend. Malik Knowles gave the team a deep threat in the second half it desperately needs. The defense remains stout and Chris Klieman clearly used the bye week to get his guys back on track after losing two games in a row. As for those upset K-State is ahead of OSU this week, OSU’s win over the Wildcats was nearly a month ago, these are done on a week-by-week basis, and as for the Cowboys… they’re a reeling team right now. More on that below.

The Cowboys are now 1-3 in Big 12 play and have lost two-straight Big 12 games by double digits, which includes a bye week in the middle to get back on track. Saturday’s game was closer than the final score indicated, but it still tells you where this team is right now. There is confusion and concern over QB Spencer Sanders’ growth, and the defense, which was strong in the first half, left gaping holes in the second half. There is plenty for Mike Gundy to work on with this program in the coming weeks.

Gary Patterson also had a week off to fix some things and it just didn’t happen for the Horned Frogs in Manhattan on Saturday. Max Duggan had some great moments, like his long touchdown run, but also looked like a true freshman many times. TCU was better on third downs, had 100 more total yards, no turnovers, fewer penalties and won the time of possession, but lost the game on Saturday. Those are the kinds of tidbits that will drive Gary Patterson crazy. As it should.

This team gave the Longhorns the scare of their lives on Saturday in Austin. QB Carter Stanley admitted he was motivated in part by something Herman said last week, but hey, whatever works for this team. Oh and new offensive coordinator Brent Dearmon looks like someone who might give Big 12 defensive coordinators some fits the rest of the season. Now let’s see if KU can keep that momentum going at home this week against the Texas Tech Red Raiders.

Sorry, WVU. But the Mountaineers moved into the bottom spot, not so much because of their performance against OU, as that outcome has happened, and will happen, to several other Big 12 teams this year. But when KU is a minute from beating Texas on the road, they deserve some props. The Mountaineers are also a rebuilding team, and Neal Brown should be focused the rest of the way on building for 2020 and beyond.