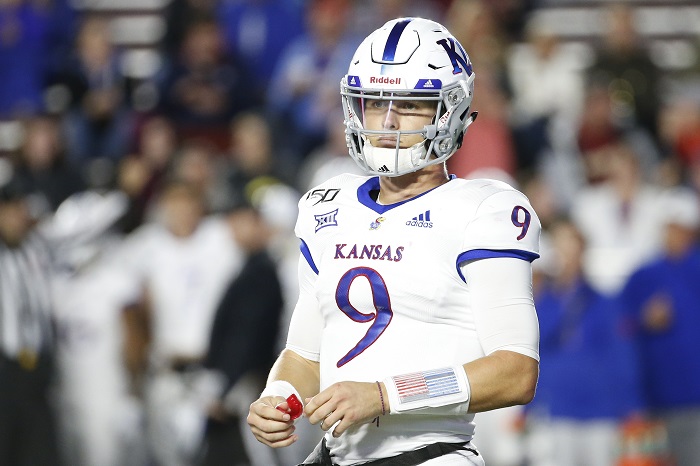 The Kansas Jayhawks nearly pulled off an upset over Texas on Saturday night. KU entered the game as three-touchdown underdogs, and had a 48-47 lead with one minute to go before Texas stormed down the field and kicked a field goal to win the game.

But after the game, KU QB Carter Stanley was apparently partially motivated in this game by something Texas head coach Tom Herman said during his press conference last week.

Last Monday, two days after Texas lost to Oklahoma, Herman was asked by a reporter about the upcoming game against Kansas. Herman replied, saying, “We actually play a game this week?”, with a smile.

KU receiver Andrew Parchment referred to that specific comment when discussing why he thought the Jayhawks felt disrespected.

Stanley was a little more vague, saying after the game, “Definitely an emotional game. I think we received a lot of disrespect before this game… I actually love Texas. I love everything about this place, really, except for kind of one guy on the coaching staff on that sideline. You’ll probably figure out who it is based off his press conference earlier this week. So I don’t have a lot of respect for that individual. But it was unfortunate we came up short.”

In fairness to Herman, that quote could have been referencing the fact that they just lost to OU and were still reeling from the game. But the fact that he flashed a smile after the wise-guy commentary, could prove Stanley’s point. We’ll never know, but whatever players want to use to motivate them is their prerogative, and this one nearly worked for the Jayhawks on Saturday night.

But now, KU needs to shift its focus to Texas Tech, who comes to Lawrence on Saturday night.