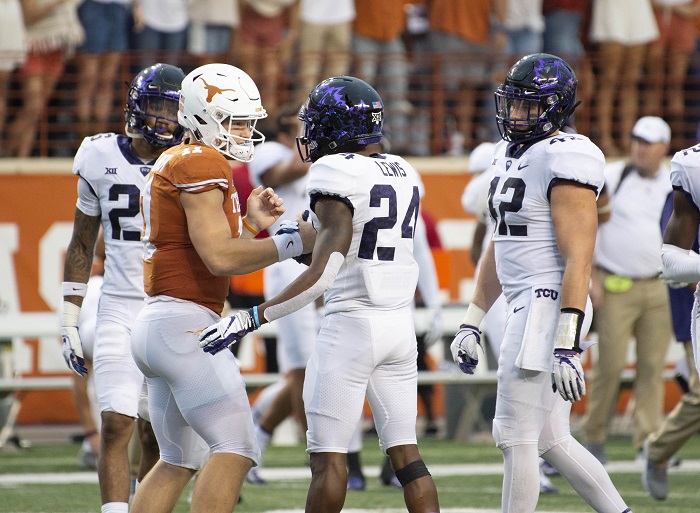 Here is everything you need to know about the upcoming Big 12 football game in our TCU vs. Texas preview and prediction.

Fun Fact: TCU has won four of the last five meetings with Texas and is 5-2 against the Longhorns since beginning Big 12 play in 2012.

Ehlinger is going to have to be the do-it-all player for the Longhorns considering how banged up this team is. Las week he had to bail his team out to slip by the Kansas Jayhawks at home. He passed for 399 yards and four touchdowns, while rushing for 91 yards. He’s second in the Big 12 behind Jalen Hurts in average total yards per game. He ranks fourth nationally in completions per game, and sixth in the nation in passing touchdowns, total offense and points responsible for per game.

Roach missed the first half against Kansas last week due to a targeting call against Oklahoma the prior week. But once he returned, he helped slow down KU RB Pooka Williams and had a big blocked PAT that Texas returned for two points. Roach has not had a huge statistical season with just 15 tackles, one tackle for loss and one QB hurry, but there is no better time for the senior to turn it on and become the leader and heart of this defense that its desperately looking for with so many injuries.

Anderson is fourth in the Big 12 Conference averaging 98.0 rushing yards per game with six touchdowns. His 7.1 yards per carry is impressive and last week snapped a four-game streak of scoring at least one touchdown. With TCU playing a true freshman QB in Max Duggan in his first game against the hated Longhorns, he needs a reliable and steady back to set the tone and calm his nerves. Anderson is the man to do that.

Gaines is third on the team with 25 tackles, and while his stats may not be flashy, he had some big plays that may have gotten overlooked last week against Kansas State. He was able to get up in the box and find himself in the backfield pressuring Skylar Thompson at times. His skill set will be needed to drop back in coverage on Saturday afternoon and help in the running game.

The Longhorns need to keep Sam Ehlinger upright. Texas has given up the most sacks in the Big 12 with 22 in seven games. That typically would spell trouble with the Horned Frogs on deck. But this is not a typical Gary Patterson team in that department. TCU has just 11 sacks in six games, which ranks them 9th in the Big 12, just ahead of Kansas State (eight in six games). The Horned Frogs don’t have the rushers off the end like Ben Banogu this season, so for the UT offensive line, this should be a chance for the offensive line to try and get back on track.

Can the Horned Frogs get its passing game going? This is their chanced against a Texas secondary that has injuries all over the place and a team that is giving up the most passing yards in the Big 12 this season at 310.0 per game. The problem is TCU is the least-efficient passing team in the conference. If the Horned Frogs wants to pull off a win, they have to find a passing game and Sonny Cumbie needs to let Max Duggan sling it around the field, preferably with many opportunities for Jalen Reagor. Mix in the passing game to keep Texas honest, but they will still need to let Darius Anderson and Sewo Olonilua go to work in the backfield.

A lot of people like TCU at home in this game against a banged-up Texas squad. I don’t. Texas got the scare it needed last week against KU and this team will be very focused heading into this game. Tom Herman will make sure of that. But as I noted above, Texas’ two biggest weaknesses this season, its offensive line and pass defense, are unfortunately for TCU, weaknesses of their own that they aren’t likely to take advantage of. So while Gary Patterson has had Texas’ number since joining the Big 12, that won’t be the case this year as Sam Ehlinger wills this team to another victory.