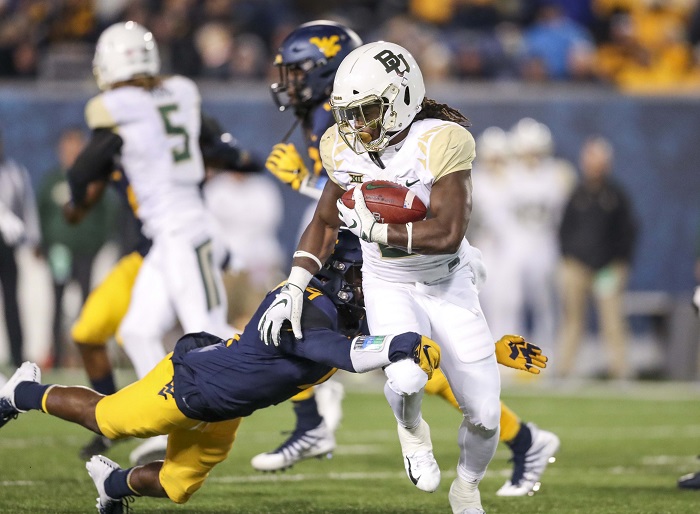 Here is everything you need to know about the upcoming Big 12 match up in our Baylor vs. West Virginia preview and prediction.

Fun Fact: These two teams never met until the Mountaineers joined the Big 12 and WVU has had Baylor’s number, going 5-2 since 2012 and Matt Rhule has yet to beat the Mountaineers.

James has become Austin Kendall’s favorite target with a team-high 41 catches, along with nearly 400 receiving yards and two touchdowns. Kendall needs to get into a groove early for WVU to have a chance at the upset and there’s no doubt that James will get plenty of targets as his quarterback tries to settle in during a tough road environment on Thursday night.

Stills is having a great junior campaign, with four sacks, ranking third in the Big 12, ranking fifth in the Big 12 with nine tackles for loss. Baylor has been, at times, vulnerable against a good pass rush, and Stills, combined with his sophomore brother Dante, are each ranked in the Top 15 in the Big 12 in both categories.

Brewer is about to step on the national stage for the first time with his team cracking a top 10 ranking at home with the Mountaineers coming to town. It’s everything Brewer has been preparing for through his first couple of tough seasons in Waco. He’s led the Bears to having the second-most efficient passing offense in the Big 12, while his 300.2 passing yards per game is third in the conference, and is fourth in the Big 12 in total yards of offense per game.

The Mountaineers have to be able to get to Brewer with their 1-2 punch of Darius and Dante Stills. Baylor has allowed 10 sacks in four games of Big 12 play, which ranks near the bottom of the conference standings. If WVU can get pressure on Brewer and throw off the BU offense, while possibly forcing a turnover or two, then they might stand a chance on the road. Also, Austin Kendall will have to be more consistent then he’s been for most of this season. Maybe it was because he was still recovering from his chest injury, but he was off the mark on too many throws two weeks ago against Oklahoma. That can’t happen this week.

This is not your father’s Baylor Bears. This team can throw it, with the second-best pass efficiency in the conference, but they rank fourth in the conference with 202 rushing yards per game and are going up against WVU’s 8th ranked rushing defense and pass defense efficiency. The Bears need to get on the board early and often and try to make sure WVU doesn’t start smelling any chance of an upset. But a 17-point favorite is not a position this group of players is used to after going 1-11 in 2017 and 7-6 last season. How they handle the role as an overwhelming favorite will be interesting.

Baylor will not be overlooking WVU considering the prime time slot on a weeknight following a bye week. McLane Stadium will be rocking like it hasn’t in at least four years and Matt Rhule will have his guys focused. Austin Kendall just isn’t very good and the Mountaineers running game is atrocious, which is key for pulling off an upset on the road. The Bears roll and go into November as the lone undefeated Big 12 team and in sole possession of first place. Who saw that coming?