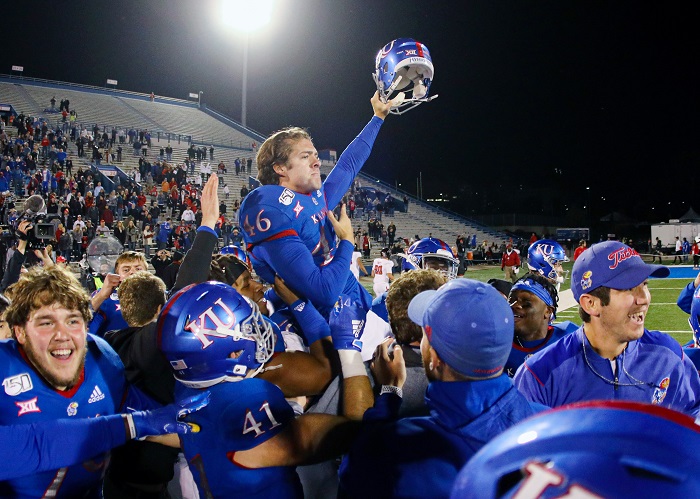 I want to thank each one of you who submitted a question this week and for those reading, I am glad you could join me. I am doing this on Monday evening and of course this mailbag wouldn’t be nearly as fun without a cold beverage right next to me. Tonight’s drink of choice? An ice-cold beer. Things haven’t quite cooled down in South Texas yet, so I am keeping beer around. Tonight, I am drinking a Sam Adams. Probably better suited for a hot day but it will certainly do. Cheers and Go Astros!

@jonkev50 asks: Can you name a crazier ending in a college football game than the Texas Tech and Kansas game?

Duke: Well first off, for those living under a rock let me break the ending down. Kansas attempted a field goal with about 13 seconds left from 40-yards out as the game was tied. The kick was blocked by Texas Tech and as a Tech player scooped up the football, he attempted to pitch the ball back, but his arm was hit, and a Kansas player recovered the ball with two seconds left. Kansas got to retry the kick and Liam Jones nailed it from about twenty something yards out to win. That was certainly the craziest finish I have seen in the Big 12 since covering it going back to the 2016 season. Now, is it the wildest finish? Considering the stakes, I would say no. Other plays that stick out to me are the Vince Young run on fourth and five, the Auburn kick six to send them to the SEC title game and the Deshaun Watson pass to Hunter Renfrow in the national title game. Not to mention, Tua to DeVonta Smith to win the title from Georgia in OT. There are many plays in big moments that stick out to me more but there is no doubt that this Texas Tech/Kansas game will stick with me.

@Maitland_III asks: Where does Texas Tech go from here after suffering that big loss to Kansas?

Duke: Glad to see you join the mailbag Maitland, next time I am in Lubbock I will be sure to say hello. Well, I would answer that, but I want to let you think about the question. After a team loses to Kansas, bad things happen. Just ask the 2016 Texas team and the 2018 TCU team. Texas failed to make a bowl game in 2016 as Charlie Strong got fired and somehow, some way the TCU team made a bowl game last season. Neither are ideal seasons to compare them to if you want to be positive but it depends on the health of Alan Bowman. He was seen throwing the ball some in pregame without a sling against Kansas which is a good sign. Plus, Tech has a bye before traveling to Morgantown. Could we see Alan Bowman then? Either way, Tech is sitting at 3-5 with games at West Virginia, at home against TCU and Kansas State before wrapping up the season in Austin versus Texas. They must win three out of those four games to get to a bowl game. Even with Bowman in the lineup, I just don’t see that happening. No matter who is playing quarterback, I think Tech will beat West Virginia. But those other games I am not sure on. Gun to my head, I say Tech finishes 5-7 this year. This probably won’t make you feel better but it’s how I feel.

@KBehr68 asks: Projections now for Iowa State’s final games since Kansas and Kansas State have shown life. Here is their remaining schedule: @Oklahoma, vs Texas, vs Kansas and @Kansas State.

Duke: I’ll say they split their final four games and go 2-2 in the month of November. I don’t mean to take the air out of the balloon, but this is one tough slate of games to end the season with. Oklahoma is still Oklahoma even though they lost and traveling to Norman is tough especially with the motivation the Sooners will have trying to avenge their loss. Texas at home is a toss up game for me and I do think the Cyclones will beat Kansas at home. As for the Kansas State game in Manhattan, that is also another toss up game right now. If the Cyclones can take care of the football, then I wouldn’t worry so much and those turnovers were back breaking last weekend against Oklahoma State. If the offense can play good, clean football then they have a chance in all these games. However, I still think they finish the season 7-5 or best case 8-4. I know it wasn’t the season many thought it would be, but it would still be a lot better than sitting at home during bowl season.

@RPTexas asks: While every college football team’s goal is to win a national championship, it has become somewhat monotonous that only few will realistically play for the title. In that light, while Saturday was a bad day for the Big 12, was it a good day for college football, showing anyone can beat anyone on Saturday?

Duke: This one is tricky. I think Saturday showed us that almost any team in the conference can beat the top team in the Big 12. That the gap between some of these teams have narrowed a bit and that starts with Kansas being competitive and now winning Big 12 games. I think it makes the conference stronger overall and will help during bowl season. On the flipside to that, it is bad for the Big 12. The Big 12 may not say it but there is no doubt that they want an undefeated Big 12 champion come playoff selection time. That way it is a lock to get the conference in. While parody in the Big 12 is fun to watch, it will hurt the national perception and we certainly don’t need any more of that because everyone LOVES crapping on the conference when they get a chance. The bottom line is while it is much more entertaining and may make the conference stronger, it is bad for championship hopes these teams have as well as the conference. Don’t get me wrong, a one loss Oklahoma or Texas team may get in but what happens when the committee sees a one loss Big 12 team that isn’t a “blueblood” and a one loss SEC, Big Ten, ACC or Pac-12 team are also fighting for that spot. That’s where things can get dicey.

@jmccullo asks: In general, is it usually good strategy to have you quarterback throw the ball 60 times against one of the worst run defenses in the league? Asking for a friend.

Duke: For those who don’t know, Iowa State quarterback Brock Purdy threw a school record 62 pass attempts. I don’t care who the quarterback is BECAUSE WHY IS A QUARTERBACK THROWING THE BALL 60 PLUS FREAKING TIMES? It didn’t make sense at all to me. Offensive coordinator Tom Manning abandoned the running game this past weekend against a bad Oklahoma State defense. Maybe he spilled some coffee or some soda on his play sheet and it got all over the running plays on his play chart or something. It is head scratching that’s for sure. It’s not like Iowa State was down 28-0 and had to throw their way back into the game.

Duke: If Alan Bowman is healthy and the staff believes he is the guy, I would assume Bowman, right? You know what you get from Jett Duffey. A guy who can manage a game but is prone to making a mistake or two. If Jett is the quarterback for the rest of the season, Tech isn’t making a bowl game I can assure you that much. If Alan is healthy, I see no reason for him not to play. He gives them the best chance to win period.

@chicken_coconut asks: Who do you see in the conference championship game? Which teams will not make a bow game? And will someone steal offensive coordinator Brent Dearmon from Kansas?

Duke: This may be my first three-part question in mailbag history here. Sorry, there is no prize for that, but I will answer your questions to the best of my ability. So here we go.

2. The teams that will miss out on a bowl game are Kansas, West Virginia and Texas Tech. Tech and Kansas are sitting at 3-5 while WVU is at 3-4 right now.

3. Yes, Kansas OC Brent Dearmon will be a hot commodity this offseason unless Kansas keeps him which would be smart on their part.

Big 12 Bowl Game Bracketology: Where Teams Stand After Nine Weeks
The Big 12 is Proving to be the Best Conference in College Football
To Top