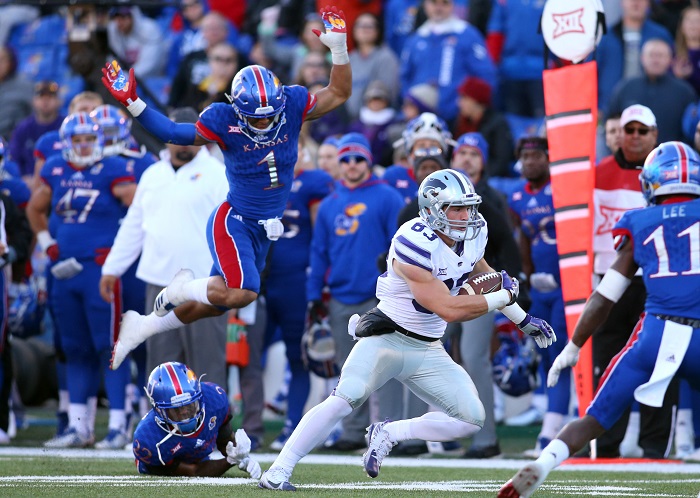 Here is everything you need to know about the upcoming Big 12 game in our Kansas State vs Kansas preview and prediction.

Gilbert has been the main back for this Kansas State rushing attack. While he isn’t the flashiest back in the world, he simply just gets the job done when called upon. So far this season, James has rushed for 558 yards and 5 touchdowns averaging an outstanding 5.6 yards per carry. I am sure he will get plenty of opportunities in this matchup.

Kansas State doesn’t exactly have a ferocious pass rush, but Wyatt Hubert appears to be their best pass rusher this season. He has four sacks on the year and leads his team in tackles for loss. With this new offense Kansas is running, Wyatt will be relied upon to get to Kansas quarterback Carter Stanley early and often to cause havoc.

What a turnaround it has been for Carter Stanley. After a so-so start to the season, Carter has over 700 passing yards and 7 touchdowns in his last two games since Brent Dearmon has taken over as offensive coordinator. What I have seen the last two weeks is a guy who is taking care of the football and getting the ball to his playmakers. Carter Stanley isn’t just a game manager anymore in this offense.

There isn’t a lot to like about the Kansas defense, but Azur Kamara has been good for the Jayhawks. Also, he leads his team with four sacks so far this year. With Kansas State up next, Azur will need to be ready for the run game coming his way because the Wildcats want to run the football at will.

This will be easy for Kansas State to prepare for this game. The Wildcats love running the football and for a team that doesn’t ran a whole bunch of plays offensively, they have run the ball more than 300 times this season. Kansas State lives on the ground offensively and the good news for them is that Kansas has the worst run defense in the Big 12 as they are giving up 222 yards per game on the ground. Defensively, Kansas quarterback Carter Stanley has been airing out the football and surprisingly, Kansas State has one of the better passing defenses in the conference. However, they will have to pick their poison when it comes to loading the box to stop Pooka Williams Jr. or play the pass.

Much like their opponent, it may be wise to use Pooka Williams Jr. a lot in this game. Kansas State has the second worst run defense in the Big 12 and I am sure Kansas offensive coordinator Brent Dearmon already knows that. While they won’t be afraid to air it out, the bulk of the work on Saturday will be done on the ground. I would be willing to bet that the defense sells out towards the run game. Try to force Skylar Thompson to beat you with his arm.

While I think the Kansas offense has the capability of scoring some points in this game, I am not sure they will get many possessions in this game. That’s because Kansas State will do their best to dominate the time of possession and keep that clock going as they run the football time and time again. Remember, the Jayhawks are giving up over 220 rushing yards per game and the Wildcats will take full advantage of that.

Big 12 Football Mailbag: Was Saturday’s Underdog Dominance Good or Bad for the Big 12?
Oklahoma State vs. TCU: Preview and Prediction
To Top