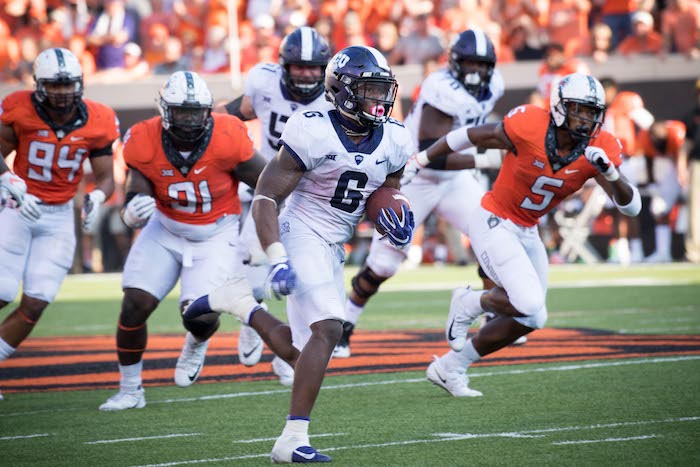 Here is everything you need to know about the upcoming Big 12 match up in our Oklahoma State vs. TCU preview and prediction.

There’s familiar faces on the other sideline for both teams this weekend. For TCU, Oklahoma State associate head coach/wide receivers coach Kasey Dunn coached cornerbacks at TCU in 2003, and defensive analyst Chris Thurmond was the Frogs’ defensive backs coach in 1995, and then again for 1998-2000 under then defensive coordinator Gary Patterson. For OSU, Texas Christian co-offensive coordinator Curtis Luper was a running back in Stillwater from 1984-87 and an assistant coach in 2005-08. Frogs defensive coordinator/linebackers coach Chad Glasgow played linebacker for the Cowboys from 1991-93 and stayed on as a graduate assistant for 1994-95.

Don’t let the junior’s stats confuse you, he is elite. There’s a reason he was mentioned in the same breath as OSU’s Tylan Wallace and OU’s Ceedee Lamb all offseason as the best receivers (maybe the best players) in the Big 12. The Cowboy defense has trouble wrapping up ball carriers which bodes well for Raegor, both on short passes and handoffs.  Add in him returning kicks against the shaky OSU special teams and he should be able to use Saturday afternoon to remind people there are three elite receivers in the conference.

In the last game against Texas the freshmen QB threw for 273 yards and two tds while also leading the team in rushing with 72 yards and another score. The OSU defense has given up 424, 312, and 382 yards to the last three quarterbacks they’ve faced. Duggan should have similar success as long as he is smart and safe with the ball and hits his playmakers (like Raegor) and lets them do the work after the catch.

The freshmen doesn’t have impressive stats, just 15 tackles and 2 sacks, but he’s been getting more and more playing time including at linebacker.  The DE/LB hybrid role in DC Jim Knowles scheme worked well for the departed Jordan Brailford last season who had 10 sacks and 17 tackles for loss. Ford isn’t going to get those kind of stats this year but he has shown flashes and I expect him to have at least one game where everyone thinks “oh man he’s going to be a problem for the next few years!”  I feel like this may be that game.

With the TCU defense almost certainly taking away the outside passes to keep OSU’s speedy wideouts from taking screens to the house there will be dirty work to be done over the middle for the slot receivers.  Stoner has spent his first two years taking the tough hits from linebackers and safeties after catches between the hashes. The sure handed junior has been quiet the last two games with only one catch for eight yards.  Expect that to change against the Frogs.

After looking bad against Iowa State and very pedestrian against Kansas State (both loses on the road) TCU got back on track with a huge win in Fort Worth against the Texas Longhorns last week. Max Duggan played a great game for the Frogs, throwing for two touchdowns and running for another. The TCU defense got back to doing Gary Patterson things, forcing Texas‘ Sam Ehlinger into four interceptions, a career high for a player who is famously careful with the football.  All in all, it was a complete victory for TCU against a talented but depleted by injury Texas team. Can they repeat that kind of performance on the road in Stillwater? The Cowboys are more explosive on offense than Texas is with their deliberate, grinding style. Of course OSU quarterback Spencer Sanders is careless with the ball at times, and his turnovers can change the game in an instant. Can the TCU defense control the All-Americans lined up across from them and make Sanders try to do all the work? Can Duggan repeat his performance from last week against a defense that turned Iowa State’s Brock Purdy over 3 times last game?

The 2019 Cowboy offense isn’t up to the explosive standards set since 2010. An up and down offensive line and a young quarterback have caused a few issues and pretty much taken the longer downfield throws out of the playbook.  In the upset of Iowa State OSU managed to score 21 points in the first half without ever snapping the ball on the Cyclones’ side of the 50, and scored 34 in the game without ever getting in the red zone thanks to a pair of long kicks and an interception returned for a touchdown in the second half. The first half scores came courtesy of a 65 yard footrace run by Chuba Hubbard and a pair of long wide receiver screens by Tylan Wallace (a spectacular 71 yards) and Brayden Johnson (50 yards).  The problem they have this week is Gary Patterson is a defensive mastermind and always tries to scheme away what you like to do. The Cowboys should fully expect the Horned Frogs defense to focus on slowing down Hubbard and blowing up the passes to the wideouts at the line of scrimmage. This will leave Spencer Sanders to throw downfield and I suspect over the middle to move the Cowboys down the field. Both of these things are obvious weak spots in his game so far and have been avoided by the Cowboy staff most the season. Can the young quarterback step up and silence some of the critics?

Both teams are feeling the pressure to get to six wins and secure a bowl spot in seasons that haven’t gone as well as hoped. These teams are pretty evenly matched and while it should be a pretty good game I think Gary Patterson’s defensive expertise is the difference.  TCU won’t be able to keep OSU’s Chuba Hubbard from 100+ yards and a touchdown or two but they will be able to keep him from being dominate and wining the game. After taking away the quick, easy, outside throws from Spencer Sanders they get a few picks over the middle that seal the fate of the Cowboys by stopping multiple drives.  The Frog’s Max Duggan has an efficient but boring day against a Poke defense that is suddenly playing better but he does just enough with his legs to keep drives going and lead his team in rushing again. TCU’s Jalen Raegor goes off and gets a touchdown receiving, rushing, and on a return in the win.