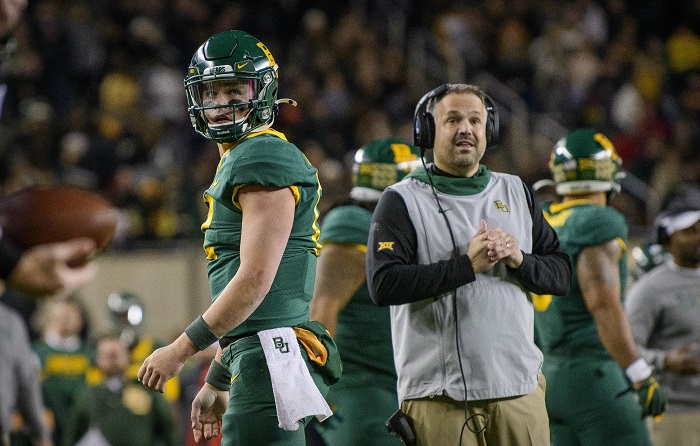 Please raise your hand if you predicted the Baylor Bears entering the month of November undefeated and in sole possession of first place in the Big 12 Conference?

I don’t think many of us can honestly do that, but that’s exactly where we stand after the Bears took care of business at home with a 17-14 win over the West Virginia Mountaineers on Thursday night in Waco.

This game got off to a slow start for the Bears, who had a grand total of nine plays and two yards on their first three drives. The good news is WVU was only able to rack up 18 yards and the game was scoreless until late in the first quarter.

Finally, the Bears got on the board first with an eight-play, 86-yard drive, capped off with Charlie Brewer finding R.J. Sneed wide open in the left corner of the end zone for a 7-0 lead. The rest of the first half was relatively sloppy with targeting penalties, a Baylor fumble and a West Virginia interception, along with a huge WVU goal-line stop that included two run stuffs inside the one-yard line, and the Bears would go into halftime with its one-score lead.

The second half started off just as sloppy as the first half ended. Denzel Mims fumbled for Baylor after hauling in a 30-yard catch, and then with WVU inside the Baylor red zone, a bad snap resulted in a turnover recovered by the Bears near mid field.

But a few minutes later, West Virginia finally got on the board with an 83-yard strike from Austin Kendall to George Campbell for the Mountaineers’ first big play of the game and after the extra point the game was tied at seven with under seven minutes left in the third quarter.

The two teams then exchanged touchdowns after Baylor went 75 yards on seven plays, ending with Charlie Brewer finding Denzel Mims for 21 yards and a score. But on the kickoff, Winston Wright took it 95 yards to the house as the Mountaineers tied the game at 14.

At the 10:19 mark of the fourth quarter, John Mayers knocked through a field goal from 36 yards out to give Baylor the lead once again at 17-14.

Two drives later, after West Virginia was forced to punt, Baylor’s R.J. Sneed touched the ball but was unable to catch the return and WVU recovered in Baylor territory. But after a delay of game on fourth down, the Mountaineers had their field goal attempt blocked and Baylor took over with a three-point lead with under four minutes on the clock.

The Bears then took a risk on 3rd at 17 at their own 24-yard line with under two minutes to play and Charlie Brewer found Tyquan Thornton for 43 yards. That forced WVU to use its timeouts and Baylor punted after three runs and the Mountaineers were pinned inside their own five-yard line where they could not complete the comeback.

Baylor improves to 8-0 and now gears up for a brutal November where they’ll travel to TCU followed by home games against Oklahoma and Texas. Meantime, West Virginia will host Texas Tech next week.