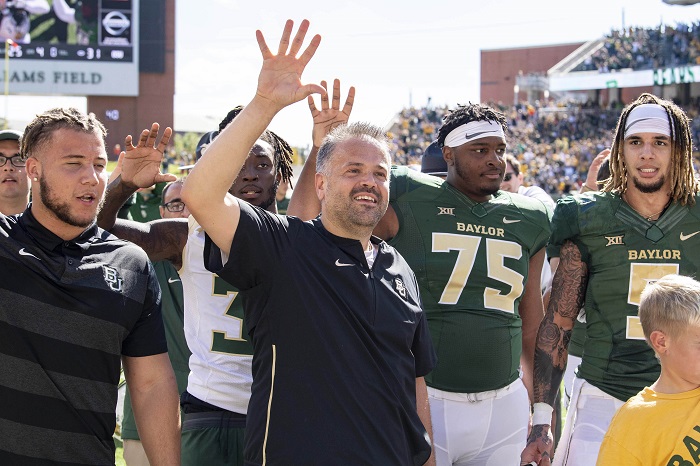 WACO, Texas — It felt like déjà vu all over again.

Clear night. Cold temperatures. Thursday night. West Virginia playing Baylor. Seems like I did this pretty recently. Yep, last year in Morgantown, in fact. West Virginia swung Baylor around like one of those sock monkeys, 58-14. The Mountaineers were coming off a loss to Iowa State, one that ended their undefeated regular season, but not one that ended their hopes of reaching the Big 12 Championship game. No, those hopes ended three games later when the Mountaineers couldn’t survive Oklahoma State on the road, and then followed that up with that loss at home to Oklahoma.

When the West Virginia-Baylor game popped up on the schedule this season, I couldn’t believe my eyes. Thursday night. Halloween night. Waco.

But who would have thought the script would be THIS flipped?

Our #CollegeFootballAmerica Ed. is back from Waco, Texas, and our #WVUvsBAY photo gallery is up. Now, its our best shots of #SicEm and the link to the full gallery. #Baylor is now 8-0. #SicemBears #Growloween #Big12FB

I remember writing after that West Virginia win last season that things were about to get real. If the Mountaineers wanted to prove that they belonged in the Big 12 and the national title conversation, then their next four games would tell that tale — at Texas, vs. TCU, at Oklahoma State, vs. Oklahoma.

The Mountaineers went 2-2 and ended up in the Camping World Bowl, where it lost to Syracuse.

Baylor now faces the same testy November schedule. Up until now it’s been a relatively gradual climb into the national conversation for the No. 12 Bears. Their non-conference wins were against unimpressive opponents — Stephen F. Austin, UT-San Antonio and Rice (combined those teams have won four games entering this weekend). The league wins have been solid to this point — Iowa State, Kansas State, Texas Tech, Oklahoma State and West Virginia. But three of those league wins have been by a field goal or less. All five of those teams now have at least two losses.

It’s almost as if the schedule-makers in the Big 12 expected this, though there’s no way they could have. At least last year with West Virginia we KNEW there was a good chance it would be really good. But Baylor? I think most were hopeful the Bears would take another step under third-year coach Matt Rhule. But a leap like this? I’m not sure anyone had that on their mind.

But, like the Mountaineers last year, the Bears face a November that will either lift them to the Big 12 title game and, potentially, into the College Football Playoff conversation, or send them to, well, the Camping World Bowl. Hey, Orlando’s nice this time of year.

Nov. 9 — at TCU. No, the Frogs are not what they usually are. But this is a rivalry game and these two programs don’t particularly like one another. Plus, TCU won this game last year, holding Baylor to nine points.

Nov. 16 — Oklahoma. The Sooners are ticked after that loss to K-State. The Sooners would love nothing more than to screw up Baylor’s dream. OU beat Baylor last season.

Nov. 23 — Texas. The Longhorns are up-and-down, but that defense usually comes to play. And, guess what? Yep, Texas won this matchup last year.

Nov. 30 — at Kansas. Call Matt Wells at Texas Tech and ask him what happens when you don’t take your A game to Lawrence now that Les Miles is in town. Baylor won this one last year.

The one thing that will separate Baylor from the national conversation right now is the schedule. Undefeated is nice. But their resume at this point doesn’t look great on paper. The committee will look at it next week and probably have Baylor outside the Top 10, even though the Bears might see a lift into the AP Top 10, depending upon what happens in front of them.

November should take care of that. Beat those four teams, finish the regular season 12-0 and face one more game in Arlington in the Big 12 Championship. Win that game? A 13-0 Big 12 champion in a college football season that feels as parity-ish at the top as it’s been in years? It MIGHT be enough to sneak the Bears in there.

Baylor can start dreaming big now. Rhule knows they’re not perfect. He loved the defensive performance last night. The offense? Well, those eight sacks hurt. And the special teams is going to get some special time with their position coach the next few days. But Rhule knows he can lean on that defense when the offense sputters. But even he knows the offense needs to, you know, hurry up a little. It was a gritty win, but it didn’t necessarily have to be.

Baylor is about to face the same test West Virginia faced a year ago. Can the Bears survive it enough to win the Big 12, or even completely run the table and force the College Football Playoff committee to pay attention? The next month will tell.