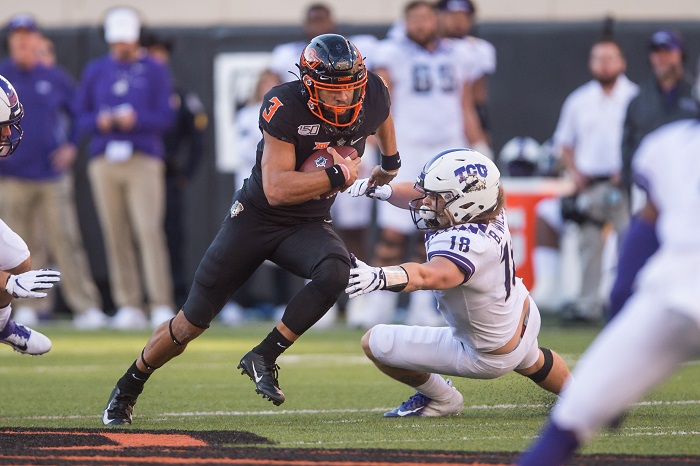 I hear it all the time, “Who has the best conference in college football?” SEC? Big 10? ACC? What about the Pac-12? Very rarely are you going to hear the words “Big 12” coming out of someone’s mouth in that conversation. Whether you do it or not, there are plenty of folks out there who love to bash the Big 12 conference (cough, Paul Finebaum, cough). Week ten has come and gone and in the Big 12, there is never just a normal weekend and that once again proved to be true this past weekend. From good games, to eye sores, there was some good, some bad and some downright ugly. Keep in mind that Texas, Texas Tech, Oklahoma and Iowa State are off.

It wasn’t pretty at all, but the Bears gone the job done. You know the rule, if you win then you are in my good graces. I guess we can get the bad stuff out of the way before I praise the defense here in a bit. The offense had five drives that went three plays or less for no scores. While quarterback Charlie Brewer didn’t make mistakes as he went 20/26 for 277 yards and 2 touchdowns, it was the lack of consistency up front that really was disappointing. Baylor gave up eight sacks in this game in a very embarrassing performance from the offensive line. It made it difficult for Charlie to have time to throw the football as he ran for his life and the run game suffered as well as they averaged just 3.1 yards per carry on 56 rushes. This game was truly won by the Baylor defense who only gave up seven points as the final West Virginia score was from a kickoff return. Even without their fearless leader Clay Johnston, the Bears held the Mountaineers to just 219 total yards and 3 for 17 on third down. At home, on the road, or a neutral site, that kind of defensive play is good enough to win anywhere against anybody. Again, it was an ugly win, but Baylor is still in first place in the Big 12 sitting at a pretty 8-0.

I don’t think Les Miles is saying, “K-State Who?”, anymore after this beatdown. The Wildcats absolutely dominated this game from start to finish in Lawrence. In fact, Kansas State had the ball for a whopping 38 minutes and 3 seconds and Skylar Thompson only threw 16 passes the entire game. What’s even crazier is that the Wildcats ran the football 60 times in this game and averaged 5.7 yards per carry as they torched the Jayhawks for 342 rushing yards. Kudos to the backs and Skylar Thompson for leading the way with 127 yards rushing. While the offense was kicking butt, the defense was just as good if not better as they allowed just 10 points and 241 yards on the road. Heck, they even held Kansas to go 2 for 10 on third down too. Despite the eleven penalties, the Wildcats left no doubt on the field and have now won 11 straight against the Jayhawks.

Without superstar wide out Tylan Wallace (tore ACL in practice), the man, the myth and the legend, Chuba Hubbard put on a show to remember in Stillwater. Chuba ran for 223 yards and two touchdowns with two second half touchdown runs of 92-yards and 62-yards. He absolutely carved up the TCU defense like I have seen no running back do before. I know due to the team’s record he may not get an invite to New York, but I don’t care, this man needs to be there for the Heisman ceremony. With his great performance, quarterback Spencer Sanders only attempted 16 passes on the day with two of those going for touchdown to Dillon Stoner. Also, Spencer added 88 yards on the ground as well. If you didn’t already know, this was run heavy game as the Cowboys racked up 301 yards rushing. Sure, the defense gave up some yards, but they really seemed to buckle down in the second half as they allowed just 10 second half points. Perhaps the biggest positive for the Cowboys defense were the four turnovers they were able to get. Also, for the fourteenth straight season, the Cowboys are bowl eligible.

The defense for West Virginia without a doubt kept the Mountaineers in this game. While they gave up some yards, giving up just 17 points on the road is more than enough to win a game. Not to mention, they sacked Baylor quarterback Charlie Brewer eight times and at times just dominated Baylor up front defensively. While the defense did everything, they could to help pull off the upset, the offense was once again the issue for this team. I know I probably sound like a broken record but the lack of a running game for the Mountaineers continues to just kill this offense. Quarterback Austin Kendall needs help and when this offense is running for 14 yards on 16 carries, it will be hard to do anything on offense. Without that 95-yard kickoff return by Winston Wright, this offense scored a whopping seven points. I could sit here and point fingers at Austin Kendall but with the bad offensive line play it would be hard of me to be too critical of him. It doesn’t matter who is back there because they won’t get any help.

While it was nice to see wide out Jalen Reagor have himself a day with 128 yards receiving, quarterback Max Duggan did not. Duggan threw three picks and completed just a little over 50% of his passes. He just couldn’t count on his arm or his decision making this game which appeared to make him takeoff more as he led the team in carries (16) and rushing yards (86). I am not sure if that is ideal, but it was interesting to see Gary Patterson and offensive coordinator Sonny Cumbie get into it on the sidelines.

The defense probably had one of their worst performances when it came to stopping the run. They let Chuba Hubbard run two long back breaking touchdowns in the second half and we just don’t normally see that happen against a Gary Patterson defense. The Cowboys didn’t try to air it out as they just attempted 16 passes which makes this performance even more strange. TCU now sits at 4-4 and has just four games left to try and get bowl eligible.

This one was tough to watch, and I am sure even more difficult to watch if you were in the stands for the game. Despite the first sellout crowd since 2009, the Jayhawks pulled a complete no show on Saturday. They got absolutely dominated up front on both sides of the ball and the offense struggled to move the football. They averaged 2.4 yards per carry and didn’t score their first touchdown until late in the fourth quarter. The offense was practically non-existent, and it was shocking to see due to how they have played the last couple of weeks. The defense only had one issue, but it was a big issue. They couldn’t stop the Kansas State running game as they were burned for 342 yards on 60 carries. The fact that a team runs the football 60 times against you should tell the entire story. It was just missed tackled after missed tackle on defense and before too long, the defense just completely mailed it in. Kansas has shown us that they are better than this performance. The effort just wasn’t there which to me is completely shocking given the circumstances.

Did the Memphis Tigers Make Their Case for Future Big 12 Expansion?
Big 12 Football Players of the Week: Chuba Hubbard, Kolby Harvell-Peel Lead the Way
To Top